James “Jim” Henry Lane, aka: “The Grim Chieftain,” and “Bloody Jim” was a controversial U.S. Senator, Kansas partisan, and Union General during the Civil War. Lane was born in Lawrenceburg, Indiana, on June 22, 1814. He grew up to study law in his father’s office and was admitted to the Indiana bar in 1840.

During the Mexican-American War (1846-48,) he served with the Indian Volunteers. Afterward, he returned to Indiana, followed in his father’s footsteps in politics, and became Indiana’s Lieutenant Governor in 1849. In 1853, he was elected as a congressman. The following year, he cast his vote for the Kansas-Nebraska Act of 1854, and in 1855 moved to Lawrence, Kansas Territory, where he would soon gain notoriety as the leader of “Jayhawkers” in the “Free-State” movement.

Lane organized the defense of Lawrence during the so-called “Wakarusa War” in December 1855, which became a turning point in his career. Up until this time, Lane had been relatively conservative. Still, as the strife of the Kansas-Missouri Border War increased, he became more and more controversial due to his speeches, ruthlessness, and tactics.

Though he is often described as quarrelsome, belligerent, and unbalanced – often committing acts that were every bit as atrocious as those of the Missouri Bushwhackers, he was a dynamic speaker with charismatic leadership abilities that won him much support among those supporting the antislavery cause in Kansas during the time.

He was elected as one of Kansas’ first senators in 1861 and was appointed Brigadier General of volunteers in December 1861. As such, he raised the “Frontier Guard” as well as commanding what was referred to as “Lane’s Brigade” or the “Kansas Brigade,” comprised of the Third, Fourth, Fifth, Sixth, and Seventh Kansas Volunteers. He was also responsible for forming the First Kansas Colored Volunteers, the first regiment of African American troops to see action on the side of the Union during the Civil War. 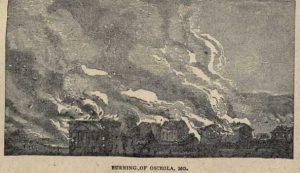 Illustration of the Sacking of Osceola, published in “The Border Outlaws” by James W. Buel, 1880.

After the Battle of Wilson’s Creek, Missouri, the Union army retreated on August 10, 1861, leaving the Kansas border exposed. To combat this, Lane organized his men and led them into action against Confederate General Sterling Price in the Battle of Dry Wood Creek on September 2, 1861. Though his troops lost the battle, Lane continued, fighting in a skirmish at Paninsville, Missouri, on September 5. Lane continued his cause, fighting through the towns of  Butler, Harrisonville, and Clinton, Missouri, before he ended his campaign by burning Osceola, Missouri, on September 23, 1861.

Lane had heard hidden caches of Confederate supplies and money were being held in Osceola and determined to wipe Osceola from the map. He and his men first stripped the town of its valuable goods, which were loaded into wagons taken from the townspeople. Though they found no hidden Confederate supplies or money, nine citizens were given a farcical trial and shot. Finally, Lane’s men brought their frenzy of pillaging and murder to a close by burning the entire town. The settlement suffered more than $1,000,000 worth of damage, including that belonging to pro-Union citizens.

Lane’s Brigade then celebrated by getting drunk, so much so that according to reports, many of the men were unable to march when it came time to leave many and had to ride in wagons and carriages. They took their plunder, including Lane’s share, including a piano and several silk dresses. The troops then continued to Kansas City, Missouri.

Lingering fury regarding the Osceola Massacre stirred hatred in many Missouri citizens became one of the causes for William Quantrill’s raid on Lawrence, Kansas, two years later, on August 21, 1863.

After the assault on Osceola, Lane and his men joined Major General John C. Fremont’s army in a southward pursuit of Sterling Price’s retreating forces but were soon ordered back to Kansas to take defensive positions.

Lane was criticized for his actions in Osceola, most severely by General Henry Halleck, Commander of the Department of Missouri. The latter believed that the attacks made by Lane and Colonel Charles Jennison aggravated anti-Union sentiments in Missouri and intensified resistance to federal authority in the state.

Of their actions, he would state: “The course pursued by those under Lane and Jennison has turned against us many thousands who were formerly Union men. A few more such raids will make this State unanimous against us.” Thus, Lane’s Brigade was ended.

Two years later, when William Quantrill attacked Lawrence, Kansas, in what has become known as the Lawrence Massacre, Confederate guerillas could be heard shouting, “Remember Osceola!” Though Lane was in residence in Lawrence at the time, he was able to escape the attack by racing through a cornfield in his nightshirt.

Lane continued to serve in the Civil War until it ended and was re-elected to the U.S. Senate in 1865. However, he soon began to lose favor among his supporters when he backed President Andrew Johnson’s reconstruction policies, including the president’s veto of the Civil Rights Bill. He soon became despondent and was accused of abandoning his fellow Radical Republicans, as well as rumors of financial irregularities.

On July 1, 1866, he shot himself in the head as he leaped from his carriage in Leavenworth, Kansas. He died ten days later and was buried in Lawrence’s Oak Hill Cemetery.