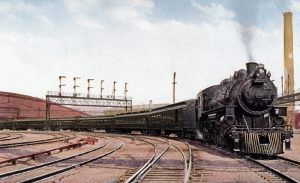 The Missouri Pacific Railroad, also known as the MoPac, was one of the first railroads in the United States west of the Mississippi River. The discovery of gold in California in 1848 ignited the need for more rapid and dependable transportation to the West. Leaders in St. Louis, Missouri, soon visualized a railroad to the Pacific Ocean. These leaders soon secured a Missouri charter in 1849 for the Pacific Railroad, which would extend from St. Louis to California. On July 4, 1851, the ground-breaking ceremony for the Pacific Railroad was held in St. Louis, and the first section of the track was completed in 1852. 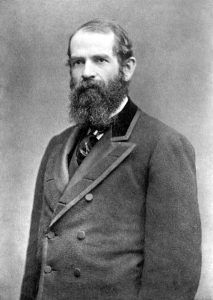 Expansion of the railroad was interrupted by the Civil War, but afterward was soon resumed, and by 1865, it was the first railroad to serve Kansas City.

In 1872, the Pacific Railroad was reorganized as the Missouri Pacific Railroad due to high debts. The following year, Jay Gould, an extremely controversial New York financier, invested in several western railroads, including the Union Pacific, Kansas Pacific, Denver Pacific, and the Central Pacific. Seeing the Missouri Pacific Railroad as a threat, he bought controlling interest in the company in 1879 and became its president. Gould soon developed a system extending through Colorado, Nebraska, Arkansas, Texas, and Louisiana. By the 1980s, MoPac owned almost 11,500 miles of railroad and over 1,500 locomotives in 11 states from Chicago in the east, Pueblo, Colorado in the west, Omaha, Nebraska in the north, and south to the Mexican border at Laredo, Texas.

Gould remained in control of the Missouri Pacific until 1915. Two years later, the line was merged with the St. Louis, Iron Mountain, and Southern Railway (SLIMS) and reorganized. Later, the company acquired or gained a controlling interest in other Texas lines, including the Gulf Coast Lines, International-Great Northern Railroad, and the Texas and Pacific Railway.

Kathy Alexander/Legends of America, updated May 2022.