Fort Leavenworth, Kansas, first known as Cantonment Leavenworth, was established by Henry Leavenworth on the Missouri River on May 8, 1827. Fort Leavenworth was the first settlement in Kansas territory and is the oldest active Army post west of the Mississippi River. Sitting on the bluffs overlooking the western bank of the Missouri River, the fort initially served as a quartermaster depot, arsenal, and troop post, and was dedicated to protecting the fur trade and safeguarding commerce on the Santa Fe Trail.

The post was evacuated in May, 1829 and occupied by Kickapoo  Indians until it was re-garrisoned in the fall of 1829. The name of the post was changed to Fort Leavenworth on February 8, 1832.

Fort Leavenworth quickly became a primary destination for thousands of soldiers, surveyors, and settlers who were passing through on their way to the vast West. During these early years, soldiers from Fort Leavenworth protected wagon trains hauling supplies over the Santa Fe, Oregon and other trails to most forts, posts and military camps of the West, some as far as the Pacific Ocean. In 1839, Colonel Stephen W. Kearny marched against the Cherokee with ten companies of dragoons, the largest U.S. mounted force ever assembled.

After the Kansas-Nebraska Act was passed in 1854, the Army spent much time attempting to keep the lid on the pot of trouble between the proslavery bushwhackers and the free soil jayhawkers in the Bleeding Kansas era.

Military expeditions from Fort Leavenworth under General Albert Sidney Johnston also assisted in 1857-58 with bringing the Mormons in Utah under Brigham Young back under federal control.

During the Civil War, thousand of recruits were recruited and mustered out from Camp Lincoln at Fort Leavenworth. Between 1861 and 1865, the regular army formed the foundation on which volunteer forces were built. Fort Leavenworth was considered a rich prize by Confederate General Sterling Price who advanced towards the fort in 1864. Before reaching the fort, however, he was defeated in the battle of Westport, Missouri on October 23, 1864.

Railroads stretching towards the west came under increasing attack by the Plains Indians during the Civil War. Because the western posts were undermanned, Confederate prisoners were called upon to help fight the hostile Indians. Five of these regiments were outfitted at Fort Leavenworth.

For the next 30 years, Fort Leavenworth became the chief base of operations on the Indian frontier, their primary mission – to control the American Indian tribes on the Western plains. Between the years of 1865 and 1891, the Army had more than 1,000 combat engagements with Apache, Modoc, Cheyenne, Ute, Nez Perce, Comanche, Kiowa, Kickapoo and other tribes. The Indians wanted to maintain their lands and freedom, and the United States government wanted to place the Indians on reservations. With the constant breaking of treaties and an inability to send the Indians promised supplies, the Indians did not feel compelled to keep treaties on their own end. Fort Leavenworth was directly involved in the Indian Wars through 1878, when Chief Joseph’s Nez Perce tribe was detained at the fort after their defeat in 1877. 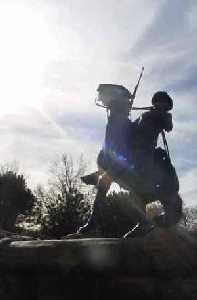 In 1866, the U.S. Congress authorized the formation of four black regiments – the 24th and 25th Infantry Regiments and the 9th and 10th Cavalry Regiments. The 10th Cavalry Regiment was formed at Fort Leavenworth under the command of Colonel Benjamin H. Grierson on September 21, 1866. In western Kansas, the Kiowa encountered the soldiers of the 10th, and finding them to be valiant opponents, termed them the “Buffalo Soldiers.”

In time, the term was used for the black soldiers in four regiments. The Buffalo Soldiers left Fort Leavenworth to win repeated honors on the plains and in the west. In 1898 the Buffalo Soldiers fought in Cuba winning praise from Theodore Roosevelt and his Rough Riders for their critical role in the battle for Santiago.

In 1875, the United States Disciplinary Barracks were established and continued operations through 2002, when new barracks were built. The barracks are the only maximum-security prison in the Department of Defense, serving all branches of the military.

The old barracks at one time held more than 1,000 prisoners, though the new building houses just a little over 500. In later years, the barracks became the temporary home of many Nazi prisoners before they were executed at the Fort. “Rocky” Graziano got his start in boxing at the barracks. 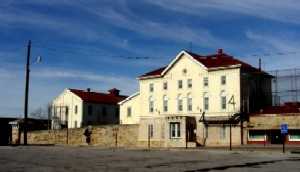 With the end of the Indian Wars, the fort transformed itself into an integral part of the Army’s new officer education system as well as a worldwide model for military corrections. In 1881, General William T. Sherman established the School of Application for Cavalry and Infantry, which later evolved into the U.S. Army Command and General Staff College. Some of the many famous students and instructors at the college are George C. Marshall, Dwight D. Eisenhower, Douglas MacArthur, Colin Powell and George Patton. 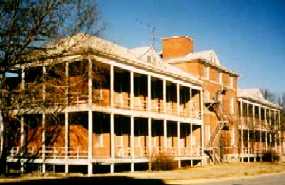 In 1885, the Wadsworth of Old Soldiers Home was built, and later became the Veterans Administration Center. In 1893, the Immanuel Chapel, made famous in Ripley’s ‘Believe It or Not,’ was built on the VA grounds.

In the years between the World Wars, graduates of the Fort Leavenworth General Staff College included such officers as Dwight D. Eisenhower, Omar N. Bradley and George S. Patton. During World War II, some 19,000 officers completed various courses at Fort Leavenworth. By the end of 1943, commanders and staffs of 26 infantry, airborne and cavalry divisions had trained as teams at the school. 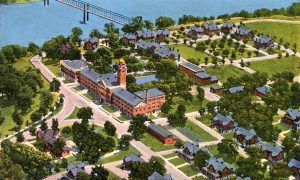 In 1946, the school was given its current name. In 1959, the college moved into J. Franklin Bell Hall on Arsenal Hill. In 1985, the Harold K. Johnson wing was added to house the Combined Arms and Services Staff School. Eisenhower Hall was dedicated in 1994. Classes for the School of Advanced Military Studies and the School for Command Preparation, as well as the Combined Arms Research Library, are in Eisenhower Hall.

The Combined Arms Center (CAC) was created in 1973. The senior headquarters on post, CAC has had responsibilities in training, doctrine and leader development since it was created. Today, through its major subordinate organizations and associated schools and centers, CAC has the mission of preparing the Army and its leaders for war as the Center for Excellence in leader development, doctrine, collective training and battle command.

The Lewis and Clark Center, the new home of the Command and General Staff College, opened in 2007. The $115 million state-of-the-art training center includes 96 classrooms for more than 1,500 students and 600 faculty members.

In addition to training facilities, the post still houses active soldiers as well including the 35th Infantry Division.

Though the fort allows visitors, and the general public is welcome to enter post without a military ID, all visitors older than 16need a valid government ID card, such as a driver’s license, passport or military ID to enter post. Vehicles must have current tags, proof of insurance and registration. Upon arrival, vehicles are subject to search.

Scattered across the main post area are limestone pedestals, which are part of the Historical Fort Leavenworth Wayside Tour. These pedestals provide information and audio narratives describing the history of each site. The self-guided tour begins at the Frontier Army Museum, which tells the story of Fort Leavenworth and the Frontier Army with its extensive collection of weapons, uniforms, and equipment. The main exhibit gallery presents the history of the Army west of the Mississippi River from 1817 to 1917. The museum is located at 100 Reynolds Avenue.

Continue on to Fort Leavenworth Hauntings