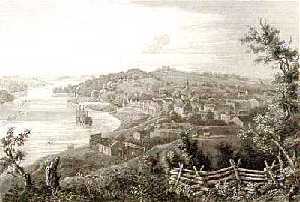 The Platte County area was originally part  of the Louisiana Purchase in 1803. When Lewis and Clark were sent to explore the new territory they passed through the area  in 1804, describing it as beautiful with  fertile soil, and diverse in plant and animal  life. Their report encouraged traders and trappers to come to the area.

In 1836 the Platte Purchase was made, where the Federal Government “officially” bought 2 million acres of land from the Iowa, Sac, Fox,Sioux and Algonquin Indians for $7,400. After the Platte Purchase, the Indians were moved to a reservation in Northeast Kansas.

The first people to settle in what would soon become Weston were two young soldiers from Fort Leavenworth, Kansas in 1837. Rowing up the Missouri River in a canoe, they discovered that the river made a natural bay at the foot of what would later become Weston’s Main Street. The bay, prime for a steamboat landing or ferry, prompted the young men to purchase property. Selling off a few of their lots, Weston officially began. Joseph Moore, one of the two soldiers, built the first cabin at the corner of what is now Market and Main Streets.

Early settlers arrived from many of the southern states including Kentucky, Tennessee, Louisiana and Virginia, bringing with them the important crops of tobacco and hemp, as well as their southern customs, including slavery. Soon, emigrants from Austria, Germany, Scotland, Ireland, and Switzerland discovered the area, attracted by the rolling hills that reminded them of their homelands. The Platte Purchase allowed these new settlers to homestead their property if they cultivated at least ½ acre and built a dwelling. 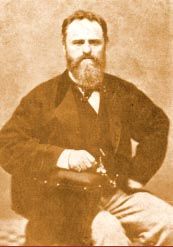 In 1838, one of Weston’s first entrepreneurs arrived by the name of Ben Holladay, at first establishing a small tavern. Later he would become involved in a number of businesses in the area.

By 1839 Weston had grown to a population of 300. Initially, the main source of income for the settlers was the farming of tobacco. As early as 1840, tobacco was floated on rafts to Glasgow, where it would be packed into hogsheads and shipped on steamboats to St. Louis and Cincinnati.

Tobacco is still cultivated in the Weston area to this day.

Later, the farmers would find that hemp, a product used to make rope, provided an even higher profit, and this became the main cash crop of the time. However, hemp cultivation is very difficult work, requiring the stalks to be combed into fibers. Here, these first southern settlers actively depended upon their southern custom of utilizing slave labor for the work.

In 1841, Ben Holladay became the first postmaster of the community. He also bought out a stage line and opened Holladay’s Overland and Express Company, capturing seven mail routes serving the Nebraska and Wyoming territories. Holladay would eventually become known as the “Stagecoach King” when in later years he acquired an almost monopoly of the stage, mail and freighting business between the Missouri River and Salt Lake City. 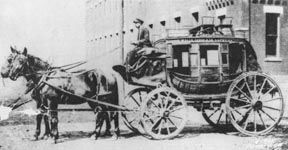 But, his main source of business in Weston in 1841 was outfitting the Mormon wagon trains headed to Salt Lake City. Holladay would also later build the International Hotel, one of the best places to stay in Weston before moving west. Unfortunately the hotel later burned down and no longer stands today.

The town continued to grow as area businesses actively traded with Fort Leavenworth and the area Indians. Large warehouses were established along Market Street close to the wharf, to serve the burgeoning river trade. 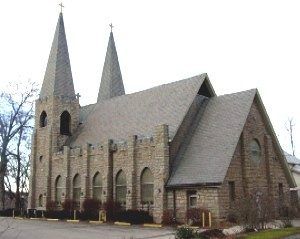 In 1844, the Holy Trinity church was built, sitting high upon a hill on Cherry Street. The Presbyterian Church, also built in the 1840’s, would ring its bell to alert dockworkers that a steamboat was coming. The Presbyterian Church is now the Christian Assembly church and sits at the corner of Washington and Thomas. Both historical churches are still active today.

With the coming affluence, early settlers began to build stately columned Federal Style two-story houses like those they had left in the South. The town residents also built several commercial buildings that exhibited the influence of the French traders from New Orleans and Canada, as well as a German influence from those emigrants who arrived in the area.

In 1846 the St. George Hotel (now the Hotel Weston) was built, one of the three in Weston during its heyday, but the only historic hotel remaining. In the 1800’s the hotel catered to the working man, providing 47 rooms on the top two floors. On the first floor was a saloon, sample rooms where traveling salesmen could exhibit their wares, a tobacco shop, a restaurant and two retail spaces. 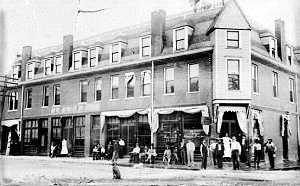 Between the years of 1846 and 1848, Ben Holladay furnished supplies to General Stephen Kearny’s Army during the Mexican War. Continuing to expand his empire, Holladay moved to California in 1852.

By the early 1850’s, Weston’s population had grown to 5,000 becoming the second largest port in Missouri, behind St. Louis only. At this time, as many as 300 steamboats would be seen docking in Weston from April through November unloading supplies for Fort Leavenworth and shipment West on the Oregon Trail. On their return trip, the steamboats would be loaded with tobacco, hemp, lumber, animal hides and fruit.

Buffalo Bill Cody resided for a time in Weston. After Cody’s father, Isaac, was attacked and stabbed while giving an antislavery speech in Kansas, Bill came to live with his uncle, Elijah Cody, in his home at 600 Main Street.

2 thoughts on “Weston – The Town That Refused to Die”