Sitting like a beacon in the middle of the San Francisco Bay of California is Alcatraz Island. Though most prominently known for the years it served as a maximum-security prison, the “Rock’s” history stretches far beyond those infamous days, and its legends and stories continue to find their way into American lore. 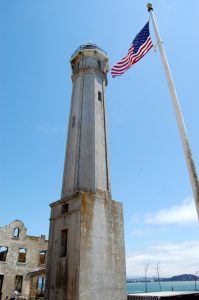 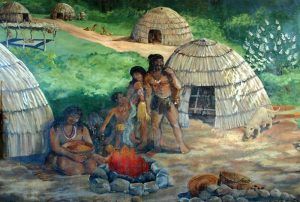 Long before Alcatraz became home to some of the most notorious outlaws in the country, it was known as a place to be avoided by Native Americans who believed it to contain evil spirits. These Native Americans called the Ohlone (a Miwok Indian word meaning “western people”), often utilized the island as a place of isolation or banishment for members violating tribal laws. Despite the legends of evil spirits, Alcatraz was also used by the Indians as an area for food gathering, especially bird eggs and sea-life.

The first Europeans to visit the island were the Spanish in 1769, who named it “Isla de Los Alcatraces,” or “Island of the Pelicans,” for its large pelican colony. Later the name was shortened to Alcatraz. When the Spanish began to build the many missions of Southern California, many of the native Ohlone utilized the island as a hiding place to escape the “forced” Christianity imposed upon them.

In 1848, after the end of the Mexican-American War, California, along with the island, came under the control of the United States. It wasn’t long before the U.S. Army realized the strategic position of the island as a defensive site for the San Francisco Bay and began the work of building a fortress atop the sandstone outcropping in 1853. Construction began with a temporary wharf, shops, barracks, and offices. Incorporating the ruggedness of the land into the defense plan, the laborers blasted the rock and laid brick and stone to create steep walls around the island. By 1854, the lighthouse was completed and eleven cannons were mounted. 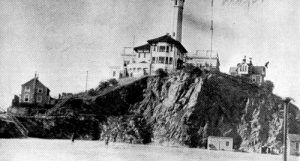 The rest of the fortress would take years to complete, as most the area laborers were much more interested in prospecting for gold, rather than the back-breaking work of building Fort Alcatraz. Another cause of delay was the lack of quality building materials. While some sandstone was quarried on nearby Angel Island, much of the granite used in the building had to be imported from China.

The first deaths of the island occurred in 1857 when the crew was excavating a roadway between the wharf and the guardhouse. Suddenly, a 7,000 cubic-yard landslide buried several of the laborers and two men were killed.

However, the fortress slowly took shape, as roadways, additional outbuildings and the final defensive position – the Citadel, was built. Completed in 1859, the fortress included a row of enclosed gun positions to protect the dock, a fortified guardhouse to block the entrance road, and the three-story citadel atop the island, that served as an armed barracks and the last line of defense. The only access to the citadel was a drawbridge over a deep dry moat that surrounded the entire building. The structure was designed to hold as many as 200 soldiers with provisions that could withstand a four-month siege.

In December 1859, Captain Joseph Stewart and 86 men of Company H, Third U.S. Artillery, took command of Alcatraz Island. Fort Alcatraz soon took the lead role as the most powerful coastal defense in the west. In addition to its strategic defensive position, the island also took on the additional role of serving as a stockade for enlisted men. Recognizing that the cold water (53° F) and the swift currents surrounding the island made it an ideal site for a prison, eleven of the soldiers who arrived with Captain Stewart were incarcerated in a cell block in the guardhouse basement. Just two months later, another soldier, who was said to have been insane, was jailed with the others. Before long, other forts with less secure garrisons began to send their deserters, escapees, and other prisoners to the island.

In April 1861, Alcatraz took on another role — that of defending the Union state of California from Confederates when the Civil War broke out. As California’s population included both Union and Confederate supporters, tensions ran high on the California coast, and the fort and its men were tasked with calming the threat of local war and protecting the City of San Francisco. Commanding the Department of the Pacific, Colonel Albert Sidney Johnston sent 10,000 muskets and 150,000 cartridges of ammunition to Fort Alcatraz and the island became the most powerful fort west of the Mississippi River. The new fortress soon deflated Confederate sympathizers’ hopes that the San Francisco Bay could be taken and California brought into the Confederacy.

“I have heard foolish talk about an attempt to seize the strongholds of government under my charge. Knowing this, I have prepared for emergencies, and will defend the property of the United States with every resource at my command, and with the last drop of blood in my body. Tell that to our Southern friends!”

— Colonel Albert Sidney Johnston, Commander of the Department of the Pacific, U.S. Army, 1861

Though no one ever attacked the rugged island during the Civil War, the military personnel on Alcatraz increased to over 350 men.

On August 27, 1861, Alcatraz was officially designated as the military prison for the Department of the Pacific, which covered most of the territory west of the Rocky Mountains. Like most prisons of the time, the conditions in the cell house were terrible, with men sleeping on the stone floors, side-by-side. With no heat, running water or sanitary facilities in the cells, sickness became common among the prisoners.