Speakeasies, illegal taverns that sell alcoholic beverages, came to an all-time high during the Prohibition era in the United States from 1920 to 1933. These bars, also called blind pigs or blind tigers, were often operated by organized crime members.

In 1917, the 18th Amendment to the United States Constitution, which prohibited the “manufacture, sale, or transportation of intoxicating liquors,” was drafted and passed national legislation the following year. Called the “noble experiment” by Herbert Hoover, 75% percent of the states approved the amendment, and it was ratified on January 16, 1919. In 1920, the Volstead Act was passed to enforce the amendment. 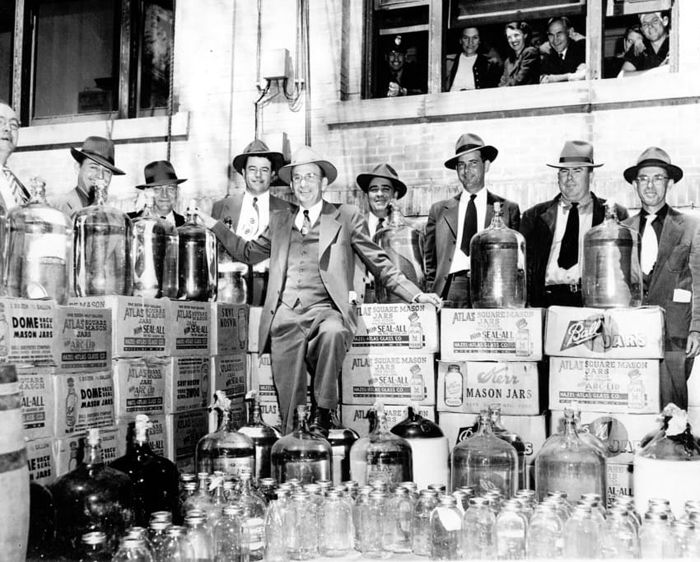 Initially, Prohibition advocates rejoiced in their initial “successes,” as arrests for drunkenness declined and medical statistics showed a marked decrease in treatments for alcohol-related illnesses. However, statistics also demonstrated that drinking, in general, had been decreasing for several years before Prohibition. Many felt that any further decrease was due to the high cost of bootlegged liquor rather than the law itself.

With World War I ending and the nation in high spirits, the demand for liquor quickly increased. Another culture emerged for those who saw an opportunity and financial gain in thwarting the new law and filling the public demand. Bootleggers, illegal alcohol traffickers, and speakeasies began to multiply by the hundreds.

Though they may have appeared to close down for a short period, saloons simply went “underground” in basements, attics, and upper floors disguised as other businesses, such as cafes, soda shops, and entertainment venues. Given its name because of the need to whisper or “speakeasy,” these many illegal drinking enterprises quickly became established institutions, so much so that some said for every former legitimate saloon that closed, it was replaced by a half dozen illegal “gin joints.” 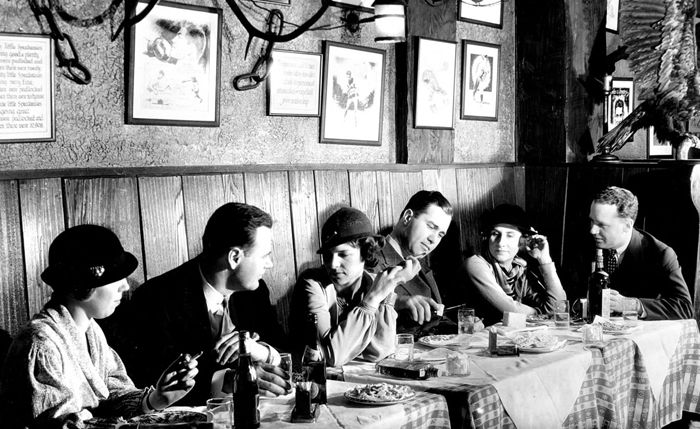 At one time, there were thought to be over 100,000 speakeasies in New York City alone; New Jersey claimed there were ten times as many as before the amendment, and Rochester, New York, twice the number. The same became true all over the nation.

Gone were the boardwalks, swinging doors, spittoons, and mustache towels of the saloon era, as speakeasies disguised themselves in numerous creative ways. Generally, before a thirsty patron could cross the illegal threshold, a password, specific handshake, or secret knock was required. Gone also were the tinkling sounds of the player piano and dance hall girls as Prohibition ushered in the age of Jazz. With stiff competition from numerous establishments, many of the speakeasies provided music for their patrons, and hundreds of jazz musicians quickly found work. And, where there is dancing, there will be women.

But in these new “saloons” of the Prohibition era, these many women were not exclusively dancehall girls or entertainers. Having been long banned from the saloons of the past, “regular” women found accessible entrance into these new establishments. 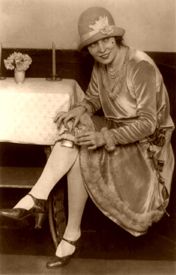 Lady hides a flask during Prohibition, 1926

Before the amendment, women drank very little, and even then, perhaps just a bit of wine or sherry. Just six months after Prohibition became law in 1920, women got the right to vote, and coming into their own, they quickly “loosened” up, tossed their corsets, and enjoyed their newfound freedoms. The “Jazz Age” quickly signified a loosening up of morals, the exact opposite of what its Prohibition advocates had intended, and in came the “flapper.” They flooded the speakeasies with short skirts and bobbed hair, daring to smoke cigarettes and drink cocktails. Dancing to the jazz tunes of such soon-to-be-famous jazz greats as Louis Armstrong, Duke Ellington, Bojangles Robinson, and Ethel Waters, their powdered faces, bright red lips, and bare arms and legs displayed an abandon never before seen by American women. Quickly, both Prohibition and jazz music were blamed for the immorality of women, and young people were attracted to the glamour of speakeasies and began to drink in large numbers. Songwriter Hoagy Carmichael described the new era as “it came in “with a bang of bad booze, flappers with bare legs, jangled morals and wild weekends.” 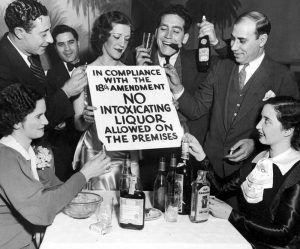 “No Liquor” at this Speakeasy

No longer did the free-flowing liquor in speakeasies carry its former names of White Lightning, Tanglefoot, and Firewater; alcohol now carried the new monikers of cocktail, devil’s candy, bathtub gin, booze, and hooch. Where beer and wine had previously been the drinks of choice, now alcohol was drunk much more frequently, as it was easier to transport and took up less space, making it cheaper for speakeasy patrons. The “cocktail” was born at this time, which had virtually been non-existent before Prohibition. In the days of the “Old West,” most men drank either beer or straight shots of liquor. However, during this new era that welcomed women, alcohol began to be mixed with soft drinks, sugar water, and fruit juices. Making the bootlegged liquor much more palatable, millions of people who didn’t like the taste of beer, wine, or hard liquors found cocktails irresistible, turning men and women alike into “criminals” by the thousands. While often having their cocktails in teacups in case of a raid, old social barriers were broken as the rich and powerful began to rub shoulders with ordinary folks. From housewives to large business owners, blue-collar workers, corrupted police chiefs, and mayors, these many patrons befriended each other in their quest of the same goals – drinking and avoiding the law.

In the speakeasies, drinking to get drunk became a popular pastime, whereas before, alcohol was generally considered secondary to eating and socializing. Increasingly, it became fashionable to defy the Prohibition laws, and the hip flask became a symbol of rebellion, seen everywhere – at theatres, festivals, and sporting events. 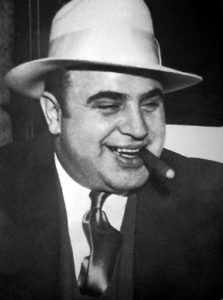 Like their counterpart saloons of the past, prostitution and gambling flourished in speakeasies. But, they also introduced a new element to their patrons – drugs. Many, who would never have come into contact with these substances, found a new source of “entertainment” in the permissive atmosphere of the speakeasies. Narcotics, hashish, and marijuana were soon used in abundance.

Organizations were required to supply these many illegal establishments with beer, wine, and liquor, hence the birth of organized crime. Into this crime-ripe environment walked such characters as Al “Scarface” Capone in Chicago, the Purple Gang of Detroit, Lucky Luciano in New York, and hundreds of others. The largest majority of speakeasies were established and controlled by organized crime, which opened everything from plush nightclubs to dark and smoky basement taverns.

Though raids became a daily federal pastime, law enforcement couldn’t keep up. When the enforcers successfully targeted a “gin joint,” the anticipating club owners were often able to disguise the true intent of their businesses as elaborate alarms were installed and their illegal contraband hidden in drop shelves and secret cabinets. Other establishments didn’t even bother with hiding or disguising the liquor, as they paid out part of their profits to Prohibition agents and police officers, leading to a monumental amount of political corruption.

Increasingly, organized crime groups controlled the liquor industry, which led to turf wars and gang murders, the worst of which was the St. Valentine’s Day Massacre of 1929 in Chicago. Blamed on Al Capone, seven men were killed in the increasingly violent war over liquor control. Though gaining the most attention, this was just one violent event of the era, as, by the late 1920s, Chicago authorities reported as many as 400 gangland murders each year. Chicago was not alone in its high crime rate, as virtually every city across the nation was rife with illegal liquor trafficking, speakeasies, and the violence they bred. 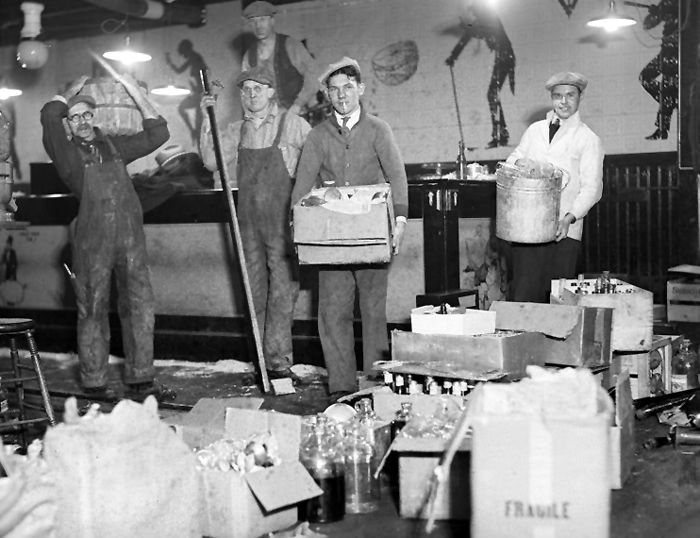 Dismantling a Speakeasy in Boston after a raid.

Another setback for prohibitionists was their loss of control over the location of drinking establishments. Where before, ordinances and licensing laws were utilized to limit alcohol sales on Sundays, election days, and in specific neighborhoods, illegal speakeasies sprouted up everywhere without limitation on their hours. Serious crime rates, which had been falling during the first part of the century, gradually reversed themselves during Prohibition, as homicides, burglary, and assault increased. The prisons began to become overcrowded due to those incarcerated for alcohol-related crimes. In no time, American prisons were suffering from extreme overcrowding.

As the newspaper headlines across the country screamed violent headlines, the public increasingly blamed Prohibition for the violence and the political corruption that had become rampant across the country. Before long, groups began to organize to repeal Prohibition, especially after the Great Depression, when people were looking for jobs that would be created if breweries, distilleries, and taverns could reopen. Even Herbert Hoover was forced to admit that the 18th Amendment offered more harm than good.

By 1932, both presidential candidates, Franklin D. Roosevelt and Herbert Hoover, favored repeal. When elected, Roosevelt backed the repeal, and on December 5, 1933, the 21st Amendment to the Constitution officially repealed the 18th Amendment, and the “Noble Experiment” ended.

When Prohibition finally ended, the word “saloon” had virtually disappeared from American vocabulary and legal establishments once again opened in abundance, referring to themselves as “cocktail lounges” and “taverns.”

Whether it’s called a saloon, a speakeasy, a bar, or a tavern, these many recession-proof businesses will no doubt live not only in our rich history but long into the future. 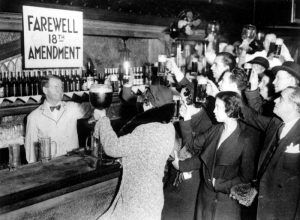 Customers at a bar celebrate the end of Prohibition 1933.

When I sell liquor, it’s bootlegging.
When my patrons serve it on a silver tray
on Lakeshore Drive, it’s hospitality.