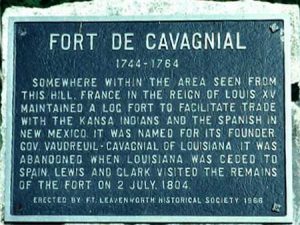 Fort de Cavagnial, Kansas was not a military post; rather, it was one of many early trappers and traders’ posts. Also known as Fort Cavagnolle, Post of the Missouri, and Fort de la Trinité, this was a French fort on the Missouri River

Established before the Louisiana Purchase, it was built by a French trader, Joseph Deruisseau, who, on August 8, 1744, was granted a monopoly to trade with the Indians along the Missouri and Kansas Rivers. The fort was named for Louisiana Governor Pierre François de Rigaud, Marquis de Vaudreuil-Cavagnal, and was the most western fort on the Missouri River.

The fortress was small but substantial, including log buildings covered with mud such as a commandant’s house, guardhouse, powder house, trader’s house, and a building to house employees. A stockade surrounded it with bastions at each corner. With plans to extend trade to Santa Fe, New Mexico, the post thrived for several years until the advent of the French and Indian War, which seriously affected the Indian trade. However, the site continued to be utilized until France abandoned the fort after Louisiana Territory was ceded to Spain in the treaties concluding the French and Indian War.

The fort’s exact location is not known because of conflicting reports about its relationship to trade with the Kanza tribe. British reports placed it below the confluence of the Kansas River and Missouri River in what is today Kansas City. However, most reports place it on the bluffs above the confluence of Salt Creek and the Missouri River just north of modern-day Fort Leavenworth, Kansas. This was a site of a major Kanza village, which Lewis and Clark visited on July 2, 1804.