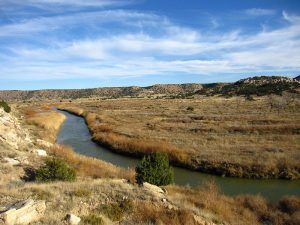 Trinidad, Colorado, the county seat and the most populous city of Las Animas County, lies 21 miles north of Raton, New Mexico, and 195 miles south of Denver.

Nestled in a cottonwood-lined valley beneath the 14,000 foot Mount Culebra of the Sangre de Cristo mountains to the west and the Spanish Peaks to the north, the valley has been utilized for at least 10,000 years by the indigenous people of the area who encamped along the Purgatoire riverbank and flourished hunting the valleys’ abundant game.

By the time the first Europeans came to the area, the region was inhabited primarily by the Ute tribe in the mountains and by the Cheyenne, Arapaho, Kiowa, and Comanche on the plains.

The first European to enter the area was Spanish soldier and explorer, Juan de Ulibarri, in 1706. Ulibarri’s party journeyed north to the Arkansas River, skirted the Spanish Peaks, and made their way to El Quartelejo, the northernmost Indian pueblo located in present-day Kansas. Ulibarri claimed the area for Spain and reported the presence of the French on the plains. On another mission in 1719, New Mexican Governor Antonio de Valverde crossed Raton Pass and traveled through the area, reaching the headwaters of the Purgatoire River. The following year, Pedro de Villasur embarked on an ill-fated journey northward from Santa Fe to determine whether there were French incursions on the western plains. He met his death at the hands of a group of Pawnee Indians. 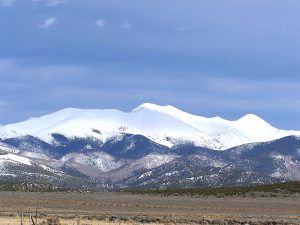 During the time of Spanish possession, no trade was allowed with the United States and those who were caught were often arrested and jailed. However, brothers Pierre Antoine and Paul Mallet, French Canadian voyageurs, led a party of six from Illinois to Santa Fe through what would later become Trinidad in 1739.

Despite Spanish control of the region, by the early 1800s American explorers such as Zebulon Pike, Stephen Long and Jacob Fowler were traveling through the area.

In 1821 Mexico won its independence from Spain and southern Colorado south of the Arkansas River became part of Mexico and trade between Mexico and the US was legalized by treaty. The same year, a young Missouri entrepreneur named William Becknell made the first trip on what was to become the known as the Santa Fe Trail, which became a vital link for commerce between Missouri in the United States and Santa Fe, New Mexico. 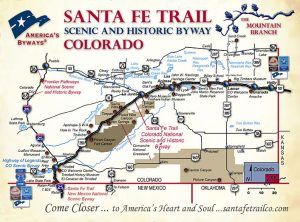 The trail ran about 800 miles west from Missouri, eventually splitting into branches known as the Mountain Branch, and the Cimarron Cutoff leading to Santa Fe. A major component of early trail commerce was the fur trade and in 1832, Charles and William Bent and Ceran St. Vrain erected Bent’s Fort in present-day Otero County about 88 miles northeast of Trinidad. It became the most important post of the southwestern fur trade.

After passing Bent’s Fort, the Mountain Branch of the Santa Fe Trail paralleled the Purgatoire River and forded it in this area before making its difficult route over Raton Pass. This area soon became a favored campground for travelers along the trail as thousands of lumbering freight wagons pulled by six or eight-span of oxen made their way to and from Santa Fe. Often, these trains rested here, making repairs and recuperating before continuing their trips. Here, there was ample water, shaded campgrounds and good forage for the livestock. The main trail followed a path along what is now Trinidad’s Commercial and West Main Streets.

Settlement began in the Purgatoire River Valley in the 1840’s when Hispanic people moved northward into the area from New Mexico. However, most of these early people were pushed out by hostile Ute Indians. 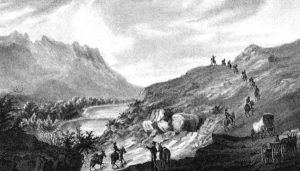 In August 1846, during the Mexican-American War, the U.S. Army of the West, commanded by Colonel Stephen W. Kearny, marched through here on its way to conquer the Mexican territorial capital of Santa Fe. His army of 1,600 soldiers, 1,500 supply wagons, 15,000 oxen, 4,000 mules, accompanied by numerous teamsters, drovers, and a few women, camped along the Purgatoire River. After resting for a short time, the large caravan then made their way over the crude trail across Raton Pass. Though the army made it over the pass, their journey was fraught with difficulty. At times, it was necessary to draw the wagons up and let them down by ropes. Many wagons were destroyed and supplies had to be left behind. Making matters worse, was the fact that the soldiers were on half and third rations.

In 1860, the United States Army established Fort Wise (later Fort Lyon) on the Mountain Branch of the Santa Fe Trail and the next year saw the Postal Service change the mail route from the Cimarron Cutoff to the Mountain Branch. This resulted in the area receiving a Barlow & Sanderson stage line. 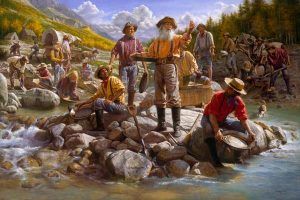 By that time, the Colorado Gold Rush had begun and New Mexico traders began to bring freight caravans through Trinidad to supply the fledgling city of Denver. One of these traders was a man named Felipe Baca, who traveled through the valley to sell a load of flour. Impressed with the valley’s potential for agriculture and grazing, 29-year-old Felipe determined to move to the valley. Baca had already become a prosperous farmer and rancher in New Mexico, accumulating most of his wealth through raising sheep. A few months later he left his family in northern New Mexico and moved to the Purgatoire Valley, laying claim to a choice piece of bottomland that would eventually lie in the heart of the city. The next spring, Baca’s workers began to erect a dwelling and planted several crops. After harvesting, he and his men returned to New Mexico with wagonfuls of melons and grain. He then gathered his wife Maria Dolores Gonzales Baca, and his children and made the permanent move.

At the same time that Baca was building his dwelling, another man named Albert W. Archibald, an area prospector built a log house on the north side of the river in Trinidad in March 1861. That same year, Archibald assisted Dr. John Whitlock in surveying a townsite where the Main and Commercial streets were laid out along the ruts of the Santa Fe Trail. Once the plat was complete, Whitlock inquired what the new town would be called and bystanders proposed that Gabriel Gutierrez, who owned the only business – a saloon – have the honor of naming the settlement. When Gutierrez suggested “Trinidad,” the name was accepted. The second business in the new town was built by Juan Ignacio Alires, who established a store that offered groceries, fabric, and “whiskey by the quart.”