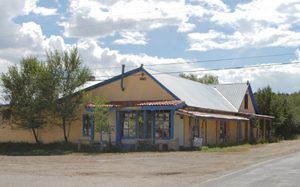 Established by Vermont men Jared L. Sanderson and Bradley Barlow during the Civil War, the Barlow-Sanderson Overland Mail Company first carried the mail and operated a stage line between Sedalia and Warrensburg, Missouri. By 1863, was also operating a line from Kansas City, Missouri to Fort Scott, Kansas. In 1866, they began to expand westward and transferred their headquarters from Kansas City to Junction City, Colorado.

By 1867, the two entrepreneurs had established a route from Missouri to California over the Santa Fe Trail and changed the name to the Barlow and Sanderson Company. They also had several shorter routes, such as Fort Larned, Kansas to Fort Lyon, Colorado, and Bent’s Fort to Pueblo, Colorado. By 1869, they concentrated their efforts on expanding their routes in Colorado due to the booming mining industry.

In July 1870, the Company bought out the Denver and Santa Fe Stage Line and renamed it the Southern Overland Mail and Express. Later that year, in December, they moved their headquarters to Denver. The company continued to grow in Colorado, becoming the largest stage line in the area, and in 1874, the headquarters moved again to Granada, Colorado. 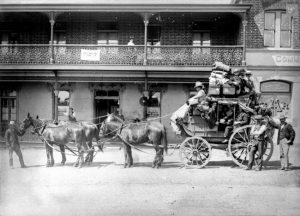 Two years later, despite rumors of bribery and corruption within the company, the stage line continued to expand. However, by 1878, Bradley Barlow withdrew, and the name of the company was changed to J.L. Sanderson and Company Overland Stage and Express Line. In 1879, the railroad was pushing through Colorado, dramatically cutting into the stage line business. Still, the company hung on for several more years, once again relocating its headquarters to Buena Vista. Though business was down, the stage lines continued to operate into the 1880s, though often plagued by bandits.