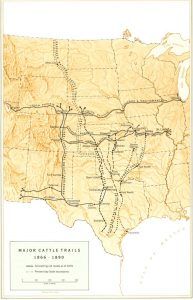 Spanning from Texas to Wyoming, the Goodnight-Loving Trail was first blazed by Charles Goodnight and Oliver Loving in 1866 to sell cattle to the U.S. Government at Fort Sumner, New Mexico. Ultimately the trail ran from Young County, Texas, southwest to Horsehead Crossing on the Pecos River, then northwards to Fort Sumner, through Colorado, ending in Cheyenne, Wyoming.

Goodnight, a former Texas Ranger and Indian Scout met pioneer cowboy Oliver Loving sometime after the Civil War. At this time, the cattle markets were inadequate for the available cattle, and the two wanted to capitalize on the need for cattle at Fort Sumner, New Mexico, where some 8,000 Navajo had been settled at the Bosque Redondo reservation. Bad planning by the government for provisions at the reservation led to an urgent need for food supplies.

The drive would be dangerous, traveling across hostile Indian country, but the pair, with their combined skills, was dedicated, and on June 6, 1866, they set out with some 2,000 head of Texas Longhorns and 18 cowhands from Fort Belknap, Texas.

Upon reaching Fort Sumner, they sold beef to the army for eight cents per pound or about  $12,000 in gold. The army was only interested in the steers, leaving the pair with 800 stocker cattle. While Goodnight returned to Texas for a second herd, Loving drove the remaining cattle north, paying Richens Lacy Wootton ten cents a head to go on his toll road through Raton Pass on his way to Denver, Colorado. He sold the remaining herd to cattle rancher John Wesley Iliff. This profitable venture led to more drives, including a partnership with John Chisum. 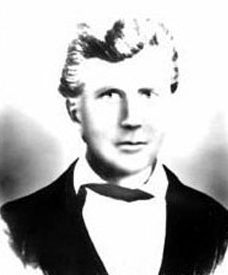 However, in the summer of 1867, when Oliver Loving went ahead of the herd to negotiate contracts, taking only one trusted scout with him, he was attacked by Comanche and seriously wounded. Though he reached Fort Sumner, New Mexico, his injuries resulted in gangrene in his arm, which had to be amputated. He died from complications from the procedure on September 25, 1867.

Goodnight continued the drive to Colorado but later returned for Loving’s body and brought it back to Texas, where he was buried in the Greenwood Cemetery in Weatherford.

In the spring of 1868, Goodnight entered into a contract with John Wesley Iliff in which he agreed to deliver his cattle to the Union Pacific Railroad town of Cheyenne, Wyoming Goodnight traveled the trail a couple of times, straightening out the route along the way and avoiding having to pay the toll at Raton Pass.

Goodnight then settled down on his Texas Ranch. Cattle drivers throughout Texas, New Mexico, and Colorado continued to utilize the trail he and Loving had blazed. Cattle ranches stocked with Texas Longhorns sprung up across Wyoming, with several Texas companies relocating or starting subsidiaries there. 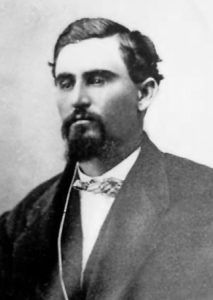