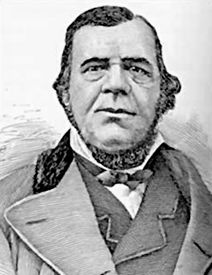 Ceran St. Vrain was a successful trader, entrepreneur, and businessman in the American West.

A descendant of French aristocrats, St. Vrain, was born on May 5, 1802, as Ceran de Hault de Lassus de St. Vrain near St. Louis, Missouri. When he grew up, he became a trader in the Taos, New Mexico area, arriving in 1825.

In 1830, with partner and fellow trader William Bent, he formed the Bent, St. Vrain & Company. Almost immediately successful, their fur trade amounted to as much as $40,000 per year, almost as much as the American Fur Company. They also made regular trips between Missouri and Santa Fe, New Mexico bringing backcloth, glass, hardware, and tobacco to trade for furs.

Though St. Vrain spent much time traveling and at Bent’s Fort, he also maintained a home and multiple business interests in Taos, New Mexico. St. Vrain ran the company stores in Taos and Santa Fe and served as American consul in Santa Fe during the 1830s.

Both St. Vrain and the Bent brothers became very influential as they were highly regarded for their business acumen and gentlemanly ways. During these influential times, they made occasional trips to Washington, D.C.

In 1844, he partnered with Cornelio Vigil, a prominent Taos trader and former mayor of Taos, procuring the Vigil-St. Vrain Land Grant encompassed some four million acres spread across south-eastern Colorado. However, after the American takeover of the southwest and the impending Mexican-American War, this led to legal difficulties, ultimately decreasing the grant to 97,000 acres.

With the Mexican-American War impending, St. Vrain and Charles Bent rushed to Missouri on their way, stopping at Fort Leavenworth, Kansas, where Colonel Stephen W. Kearny was stationed. During their visit, they supplied the army with information about New Mexico territory and its influential people.

During the Mexican-American War, the Taos Revolt began on January 19, 1847, and lasted through July. The insurrection was against the American occupation of present-day northern New Mexico. Along with the help of their Pueblo, Apache, Comanche, and Kiowa Indian allies, Taos citizens rose against the Americans.

The Battle of Taos in 1847, during the Mexican-American War, depicts the death of Captain John H.K. Burgwin during the siege of the Taos Pueblo.

During this time, St. Vrain organized a force at Santa Fe, New Mexico, to put down the Taos insurrection. Raising about 65 volunteers, they joined more than 300 U.S. troops in Santa Fe and set off for Taos. Along the way, they forced the retreat of 1,500 Mexican and Indian rebels, who took refuge in a thick-walled adobe church in Taos Pueblo.

During the Siege of Pueblo de Taos, St. Vrain’s “Emergency Brigade” positioned themselves between the church and the mountains, cutting off the forces attempting to escape the federal troops’ frontal assault. The mounted volunteers reportedly raided the rebels and killed 51 Mexicans, Taos Indians, and Apache Indians in the fierce, close-quarter fighting that followed. St. Vrain was nearly killed in the battle but was saved by a man named Manuel Chaves. In the end, the rebellion was crushed.

In the meantime, his partner, Charles Bent, who had become the first Governor of the newly acquired New Mexico Territory, was scalped alive and killed in his home on January 19, 1847.

St. Vrain withdrew from the trading partners in 1849 to diversify his other business interests. In 1855, he moved to Mora, New Mexico, where he built a flour mill that supplied Fort Union, New Mexico, and Fort Garland, Colorado. He also began publishing the Santa Fe Gazette newspaper. He served briefly as a colonel in the First New Mexico Cavalry in 1861. He continued to live in Mora until his death on October 28, 1870. More than 2,000 people attended his funeral, including the entire contingent at nearby Fort Union.

He was buried at Mora Presbyterian Church Cemetery, in Mora, New Mexico, with full military honors. He was married four times during his lifetime, fathering a child by each wife.

Nothing remains of the St. Vrain Fort they built other than a marker. However, Bent’s Fort near La Junta, Colorado, has been rebuilt and is a National Historic Site today.