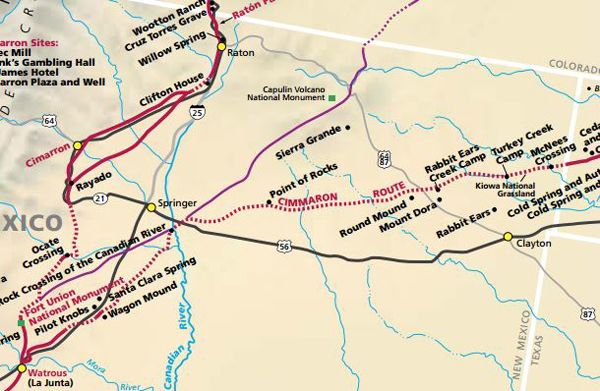 Officially beginning near the Arkansas River Crossing near Dodge City, Kansas, instead of crossing the river the Mountain Route took the caravans along the river westward to Bents Fort in Colorado before dropping down to New Mexico. Though the Mountain Route of the Santa Fe Trail presented some problems, especially the crossing over Raton Pass, it most definitely had its advantages, including the fact that it had plenty of water and was relatively safe from Indian attacks. About 100 miles longer than the Cimarron Route, it became the favored route at various times due to drought and hostile Indian raids along the Cimarron Cutoff through the southwest corner of Kansas and the Oklahoma panhandle.

The rugged 3,000-foot elevation gain in just 32 miles, as the trail passed from Bent’s Fort Colorado over the Raton Mountains, exerted a physical toll upon men and draft animals alike. Getting over the pass was a five-day ordeal as the teams struggled up a steep 2,000-foot elevation gain. Until that road was somewhat improved in 1863 by Dick Wooton and turned into a toll road, the previous trail was so narrow at times that it had to be propped up by long poles supported by the mountainside below and was quite dangerous. Many wagons and draft animals as well as people were lost during the hazardous journey. Coming down the other side of the steep pass was also difficult. Sometimes

After surviving this ordeal, the trail continued to the southwest through several villages and passed by a number of landmarks before making its way to Watrous, where the Mountain Route and the Cimarron Route converged. From there, the trail continued onwards to Santa Fe. 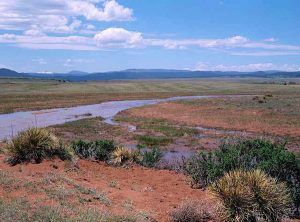