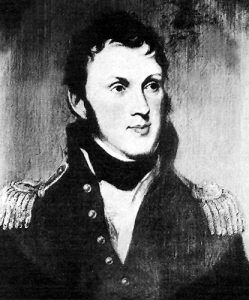 Stephen Harriman Long was an engineer, explorer, and military officer, Long led what’s known as Long’s Expedition through the great plains. He was born at Hopkinton, New Hampshire, on December 30, 1784, a son of Moses and Lucy (Harriman) Long. When he grew up, he graduated from Dartmouth College, receiving a bachelor’s degree in 1809, before continuing his education at the same institution and gaining a master’s degree in 1812. Two years later, he was commissioned as a lieutenant of engineers in the United States Army, and from 1815 to 1818 was a math professor in the military academy at West Point.

In April 1819, he became a brevetted major and was appointed to lead an expedition to explore the territory between the Mississippi River and the Rocky Mountains. Just a month before receiving this appointment, he married Martha Hodgkins of Philadelphia, Pennsylvania, on March 3, 1819. After returning from the expedition, he spent several years surveying and building the Baltimore & Ohio and other railroads. He also became an inventor, receiving several patents for steam locomotives. When the United States Topographical Engineers’ Corps was organized in 1838, Major Long was given an important position in connection with it. After several years of service in this corps, he retired from the army and died at Alton, Illinois, on September 4, 1864.