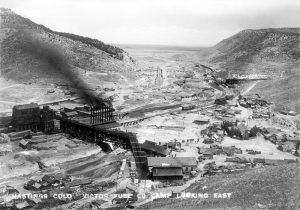 Hastings, Colorado, got its start as a railroad station in 1889 and quickly developed into a coal mining camp, founded by its owner the Victor American Fuel Company, Colorado’s oldest mining company. However, mining had occurred at the site since the 1870s.

A railroad was constructed here by the Canon de Agua Railroad Company, a predecessor of the Union Pacific, Denver and Gulf Railway Company, between 1888-1889. The tracks connected with the Denver & Rio Grande Railroad at Barnes, three miles east of the mine. The railway line was later bought out by the Victor American Fuel Company and become part of the Colorado & Southeastern Railroad.

Victor Station was established in 1889, which included a post office named Hastings. The corporate limits for the town were filed in May 1892 and most of the camp’s buildings were constructed by the following year. By the end of 1899, the Denver Times described Hastings as:

“The seat of operations of the Victor Fuel Company. The camp has a population of nearly 1,000, engaged in mining, and supplies 100 [coke] ovens with some of the best coking coal of the district… The Victor Fuel Company furnishes supplies to all the railroads, smelters, mills and reduction plants …The coke output is partly distributed through the state, the balance finds its way into Mexico, New Mexico, and Arizona and there used in the copper, gold, silver and lead smelters.”

Coke is coal baked in ovens to rid it of impurities and water so that it can burn at the high temperatures required for steelmaking and smelting. 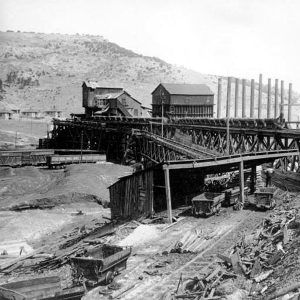 In 1900, the settlement boasted a population of 1,174 people. In 1903, the railroad line was extended from Hastings to the mining camp of Delagua, which was also owned by the Victor American Fuel Company. By 1910, Hastings had a company store, a meat market, a saloon, a church, and a good public school.

By 1915, the town boasted 1,200 people, at a time that the company operated 190 coke ovens at Hastings, producing about 300 tons of coke and 2,300 tons of coal per day drawn from the Hastings and Delagua mines.

A 1917 report by a U.S. Bureau of Mines inspector described Hastings:

“Surface buildings, in general, are substantially constructed, many of the essential structures being of brick. A coal washery is located at the end of the tipple and from this washery, coal is conveyed to beehive coke ovens a few hundred feet distant by electric larry cars and refuse is conveyed by an aerial tram to a large dump about one-quarter mile distant. The dwelling houses, some built of brick but in general of frame construction, are located in a comparatively narrow valley between the ledges forming the coal outcrop.”

On June 18, 1912, the Hastings Mine suffered an explosion which killed 12 miners, including the fire boss, and seriously injured another. The accident occurred on a new slope of the mine but didn’t damage the main operations. The explosion occurred at about 10:00 p.m. And the first warning of the disaster came when a night watchman saw smoke issuing from the mouth of the new slope shortly before midnight. After it was discovered, mine superintendent James Cameron and David Reese, head of the company’s rescue service, began directing a large force of rescuers. The rescuers were able to save one Greek miner, who was badly burned. The only means of exit had caved in and the other miners suffocated. Investigators believed that the explosion was caused by a “windy shot”, which is due to improperly placed charges or using the wrong kind or quantity of explosives, which expends its force on the mine air and sometimes ignites a gas mixture, coal dust, or both.

On April 6, 1917, the U.S. Congress had declared war against Germany, beginning America’s involvement in World War I. Just a few weeks later, on April 22, many of the Hasting miners attended the commemoration of the third anniversary of the nearby Ludlow Massacre which had occurred three years earlier in 1914. The Victor-American Company, one of the three largest coal mining companies in Colorado, was among the principal players in the Ludlow strike. 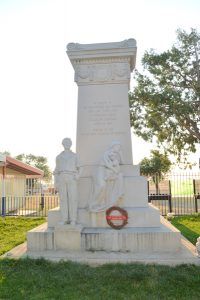 On that day, the United Mine Workers of America, which had bought the land where the Ludlow Massacre had occurred, dedicated it to those that had died during the Colorado Coalfield War. The ceremony attracted thousands of miners and their families, who paraded to Ludlow: “Every man and woman wore a red bandanna, the strikers’ emblem. They waved small American flags and carried the battle-scarred flag of Ludlow triumphantly at the head of the march.” Speeches were made by union leaders not only commemorating the site but also encouraging patriotism and the miners’ support “their adopted colors” during the war effort. An impromptu baseball game and races added to the amusement.

But things had improved for some of the area miners. Just a month before, at the end of March 1917, the Victor-American Fuel Company, owner of the Hastings mine and previously an ardent opponent of union demands, signed a three-year operating agreement with the United Mine Workers of America.

Just five days after the Ludlow Massacre ceremony, another explosion occurred at Hastings, this one much more serious than the one that occurred in 1912. On the morning of April 27, 1917, 122 men went into the Hastings No. 2 coal mine to work. At about 6:30 a.m., a fire boss had inspected the mine to make sure it was clear of any methane gas or other hazards. After the mine was cleared, work began as usual and the miners began hauling coal to the surface by means of wooden cars and a single cable. The miners were accompanied by Victor-American safety inspector, David Reese, who was well known in the mining community and had directed the rescue attempt during the 1912 explosion.