Independence, Missouri, is known as the “Queen City of the Trails” because it was a point of departure for the California, Oregon, and the Santa Fe Trail.

Lying on the south bank of the Missouri River, near the northwestern edge of Missouri, Independence was originally called home to the Kanza and Osage Indians, who called the area Big Spring. Few towns its size can claim such a rich history. The first explorers to the area were the Spanish, followed by the French. The region became American territory with the Louisiana Purchase in 1803.

In 1804, Lewis and Clark recorded in their journals that they stopped here to pick plums, raspberries, and wild apples. On August 10, 1821, Missouri became a state and through the Treaties of 1825 with the Osage and Kanza Indians the U.S. government took control of the area. Jackson County was organized on December 15, 1826, and the land was opened up for settlement. Searching for a site for the county seat, the Missouri General Assembly chose Big Spring, and on March 29, 1827, authorities approved a 160-acre site which became Independence.

In the meantime, William Becknell had blazed the Santa Fe Trail in 1821, from Franklin, Missouri, some 100 miles to the east, passing right through the area that would later become Independence. As the town grew, it soon became the eastern terminus of the Santa Fe Trail. In 1831, a boat landing was established at Blue Mills on the Missouri River, six miles distant. The business increased and the government established a customhouse for the accommodation of the early merchants.

In 1830, Mormon missionaries began moving into the area, in hopes of converting the Indians living in western Missouri and eastern Kansas. Church elders from Ohio chose the growing frontier town as their base. The following summer, in August 1831, founder and prophet, Joseph Smith, Jr. visited Independence and declared it to be the location of Zion, God’s city on earth. When the news spread that Zion had been found, the Mormons of Ohio, Illinois, and New York began an exodus to Jackson County. Smith purchased 40 acres of land for the temple just west of the courthouse in Independence. The country around Independence soon was settled with Mormons, who built numerous homes, churches, mills, established businesses, and began one of the first newspapers — the Evening and Morning Star, established by W. W. Phelps.

However, non-church members of the community were not pleased with their presence, and trouble followed. They made many charges against the Mormons, the principal one of which was that they were abolitionists. Vandalism against church members first occurred in the spring of 1832; but coordinated aggression began in July 1833, when the Evening and Morning Star published an article entitled “Free People of Color.”

Though the article was written to curtail trouble, it had the opposite effect, so outraging local citizens that more than 400 met at the courthouse to demand that the Mormons leave. When the church members refused to negotiate away or abandon lands they legally owned, several citizens formed a mob, destroyed the press and printing house, ransacked the Mormon store, and violently accosted Mormon leaders. Bishop Edward Partridge was beaten and tarred and feathered. Meeting three days later, the mob issued an ultimatum: One-half of the Mormons must leave by year’s end and the rest by April 1834.

The church members decided to stand their ground and seek redress through the courts. The Gentile settlers; however, were having none of it. In October, they mobilized again to drive the Mormons out. On  October 31, 1833, they attacked the Whitmer settlement a few miles west of the Big Blue River, demolishing houses, whipping the men, and terrorizing the women and children. The attacks and depredations against church members continued throughout the next week resulting in the deaths of two Missourians and one defender. The county militia was finally called out to quell the mob and negotiate a truce. When the church members surrendered their arms to the militia, the troops joined the mob in a general assault against them. The terrified church members, numbering about 1,200, then fled Jackson County in disarray. Most went north, across the Missouri River, and sought refuge in Clay County. 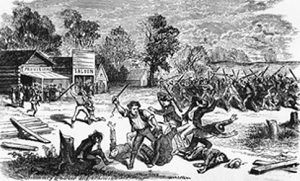 Their property was either confiscated or destroyed. They drifted about over the state living in first one town and then in another until 1838 when the troubles between the  Mormons and the Gentiles resulted in a miniature civil war. On October 27, 1838, Missouri Governor Boggs issued an order directing that the Mormons “must be exterminated or driven from the state if necessary for the public good.” Major General Clark enforced the order. Many of the Mormon

leaders were taken prisoners, but most of them subsequently escaped. The rest of the Mormons of Missouri, who had grown to more than 12,000, emigrated in the winter of 1838-39 to Illinois, where they formed the town of Nauvoo. The lot that the church had purchased on which to build a temple was sold for taxes. 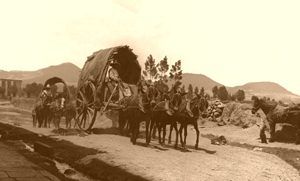 By 1835 the growing frontier village had a second road surveyed and built southwest of town towards Santa Fe, and the town’s trading strength was reinforced by Mexican merchants who came northeast along the trail. Independence was the farthest point westward on the Missouri River where steamboats or other cargo vessels could travel and trade flourished in the city, accommodating fur traders, merchants, and adventurers. Large freighting wagons rolled past the courthouse square to and from Santa Fe for the next two decades.

Beginning in the early 1840s, tens of thousands of emigrants came to Independence from the east to get outfitted and depart west on the five-month, 2,000-mile trek along the  Oregon and California Trails. The city soon became known as the Queen City of the Trails as goods and services were provided for travelers beginning their long journeys.

Samuel C. Owens, it is said, was the first trader in Independence. He came to Missouri from Kentucky when he was a young man. He was the first clerk of the circuit court of Jackson county. John Aull, his business partner, had owned a store in Lexington, Missouri. Owens and James Aull lost their lives while with Doniphan’s Expedition into Mexico. John C. McCoy gave this account of their unfortunate adventure: 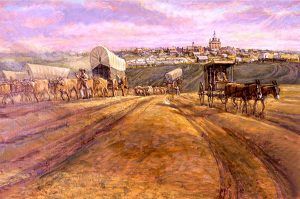 “Colonel Owens’ acquaintance with the traders did much to retain Independence as the ‘entropo’ into Mexico, and until the troubles between the United States and Mexico began in 1845-46, other places were not used. In the year 1846, it was determined by the United States to send troops across the plains to overcome opposition. Doniphan raised a regiment of men which, being fully equipped, took up the march from this country. Quite a number of adventurers of all sorts accompanied the troops. Owens and Aull decided to send a wagon load of goods along, and Mr. Owens and James Aull took charge of it. Everything promised well and no opposition was met with until within sight of the Sacramento plains, between Santa Fe and Chihuahua, where the Mexicans were drawn up for battle.