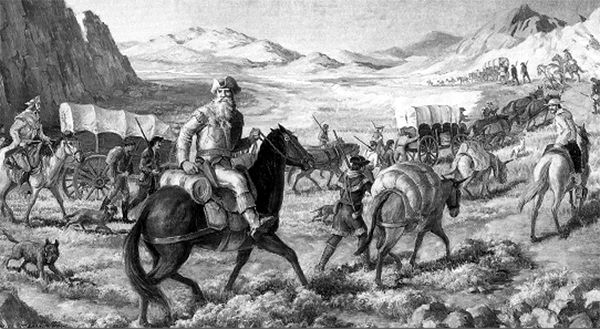 William Becknell was a frontiersman, trader, soldier, and politician who is credited with opening the Santa Fe Trail in 1821

Becknell was born in Amherst County, Virginia, around 1788 to Micajah and Pheby Landrum Becknell. When he grew up, he married a woman named Jane Trusler in 1807 in Virginia. The couple migrated to Missouri Territory three years later, homesteading west of present-day St. Charles in 1810.

There, he became involved in the War of 1812 and joined Daniel Morgan Boone, the son of the famed explorer, and his company of United States Mounted Rangers as a sergeant in May 1813. He saw extensive service on the frontier during the war and was promoted to the rank of ensign in July 1814. He participated in Major Zachary Taylor’s campaign against British-backed Indians that culminated in the Battle of Credit Island, at the site of present-day Davenport, Iowa, in September 1814. Later he was working under the command of Captain James Callaway, Morgan Boone’s cousin and grandson of Daniel Boone. Calloway, an Indian fighter of some renown, was killed in a battle with Native Americans near Loutre Creek in March 1815. Afterward, Becknell assumed command of the company and Camp Clemson, Missouri. He was then promoted to Captain and was long known as Captain Becknell.

Following his discharge from Federal service in June 1815, Becknell returned to farming, trading horses, and freighting. Unfortunately, his wife died at some point as he was married again to Mary Chribbs, who bore him a daughter that same year. The couple would have four more children over the years.

In 1816, he obtained a license to operate a ferry at the busy Arrow Rock crossing of the Missouri River, and he and his family moved to central Missouri. In addition to operating the ferry, he was also engaged in freighting and the salt trade. Sometime in about 1817, he and his family moved farther west to Franklin, Missouri. In 1820, he was an unsuccessful candidate for the Missouri House of Representatives. 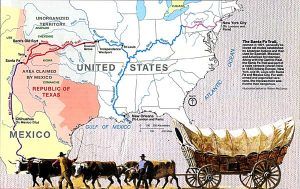 The following year, motivated by financial problems, he became the “Father of the Santa Fe Trail” when he organized a trading party that crossed the Great Plains to New Mexico. He left Franklin, Missouri, with four companions in September 1821 on his first trip to the western US with a load of freight to deliver to Santa Fe, New Mexico. He traveled via what would become known as the Mountain Branch of the Santa Fe Trail.

History has written that Becknell and his men, following the Arkansas River, spent two days moving rocks so the horses could get through the 7,834-foot-high Raton Pass, where Indians, conquistadors, trappers, and traders had already established a rough trail. However, that portion of the journey has been called into question after the discovery of the diary of Pedro Ignacio Gallego in 1993. Mexican Captain Gallego and his 400 men met Becknell on his first journey to Santa Fe. His writings and Becknell’s journal describing the landscape show more evidence that he and his men probably misidentified the Canadian River and instead crossed another river or stream. Researchers now say evidence points to a location between the Arkansas River and Puertocito Piedra Lumbre in Kearny Gap, south of present-day Las Vegas, New Mexico.

Making it through safely, they continued on to Santa Fe, where the party was welcomed on November 16, 1821, and Becknell sold the goods at a high profit. After a month of trading, Becknell and his party left Santa Fe on December 13th. His investment of $300 in trading goods had returned approximately $6000 in coins. The men returned to Missouri safely in January 1822.

The profits made by William Becknell’s first trading trip brought much-needed money and valuable goods into central Missouri, where the Panic of 1819 had a devastating effect on the economy. This economic depression was caused, in large part, by a short supply of money. With no banking system, paper money was considered worthless in Missouri, so only gold and silver coins were accepted as payment. No markets existed for farmers to sell their products or for merchants to peddle their wares, and many people were in debt. The influx of Mexican coins significantly helped Missouri’s economy as farmers and local merchants found a new market for their goods. The advent of legal trade with Mexico promised to counteract the effects of the economic panic in Missouri.

Very encouraged, he advertised for 70 men to “go westward.” Thirty men volunteered, leaving Missouri in May 1822 with some $3,000-$5,000 in goods. Taking wagons this time, they explored a new route, leaving the Arkansas River near present-day Dodge City, Kansas, and crossing to the Cimarron River, thus blazing the Santa Fe Trail. Though both people and animals suffered considerable hardship, nearly dying of thirst in the parched Cimarron Desert, they arrived in Santa Fe 48 days later.

This was the first trip to open the route to regular traffic and military movement, which soon became the first and only international trade route between the United States and Mexico until a railroad to Santa Fe was built in 1880. Becknell has since been known as the “Father of the Santa Fe Trail.” This second trip was far more profitable than the first, with the party returning to Missouri with a profit of around $91,000.

On his third journey in 1824–25, he led a party of trappers into Colorado, and in 1825-1826, he participated in the federal grading and marking project of the Santa Fe Trail.

His first political appointment was as Justice of the Peace in Saline County, Missouri, in 1827. The next year, he was elected to the Missouri House of Representatives in 1828 and served two terms. Retaining his rank of Captain, Becknell served in the Missouri state militia during a Native American uprising in 1829 and again during the 1832 Black Hawk War. Afterward, he continued his frontier activities.

In 1835 Becknell sold all his Missouri property and business interests and moved to Red River County, Texas, in the northeast portion of the state. During the Texas Revolution, Becknell mustered a cavalry unit known as the Red River Blues in July 1836. The unit served along the Lavaca River until October. That same month he reported to the capital of the Republic of Texas, believing that he had been elected to the House of Representatives. However, he was surprised to find on his arrival that he hadn’t won and relinquished his place to Collin McKinney, who had a more significant number of votes. Later, he served briefly as a Texas Ranger and commanded Red River militia companies in 1838, 1841, and 1842.

While Becknell was in Texas, he amassed a sizable estate in land and livestock in Red River and Lamar Counties. Captain William Becknell died on April 25, 1856, and was buried near Clarksville.

Old Franklin & the Start of the Santa Fe Trail