“Language is the archives of history.”

Above all things, the Plainsmen had to have in instinct for direction. I never had a compass in my life, but I was never lost. — Charles Goodnight

“Leave me alone and let me go to hell by my own route.” – Calamity Jane shortly before her death in Deadwood, South Dakota, in 1903.

A Tombstone lawyer was pleading his case to a jury in Judge Wells Spicer’s court when a burro beneath the window started braying loudly. Lawyer Marcus A. Smith arose and said, “If it please the court, I object to the two attorneys speaking at the same time.”

“If a man knows anything, he ought to die with it in him.” Some of Sam Bass‘ last words.

”I wasn’t the leader of any gang. I was for Billy all the time.” – Billy the Kid to a Las Vegas, New Mexico reporter after his capture at Stinking Springs.

“There is only one road away from trouble, and this is along the straight and narrow road.” – Otto Wood, in his book, The Life of Otto Wood, written in prison in 1926.

“Every one of my hangings was a scientific job.” – George Maledon, known as “The Prince of Hangmen.”

“I have vision, and the rest of the world wears bifocals. — Butch Cassidy

“The stranger’s slow approach might have been a mere leisurely manner of gait or the cramped short steps of a rider unused to walking; yet, as well, it could have been the guarded advance of one who took no chances with men.” — Zane Grey, Riders of the Purple Sage, 1912

“There were only two things the old-time cowpunchers were afraid of: a decent woman and being set afoot.”  E.C. “Teddy Blue” Abbott

“Perhaps I may yet die with my boots on.” — Wild Bill Hickok, who did die with his boots on. 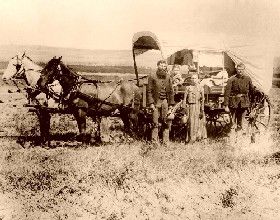 “Starting out ahead of the team and my men folks, when I thought I had gone beyond hearing distance, I would throw myself down on the unfriendly desert and give way like a child to sobs and tears, wishing myself back home with my friends.”  –  A young woman on the trail West in 1860.

“I see a good many enemies around, and mighty few friends.” – Bill Longley’s last words before he was hanged in 1878.

“There are many men in the world who are big chiefs and command many people, but you, I think, are the greatest of them all. I want you to be a father to me and treat me as your son… I am now in your hands.”  — Geronimo as he surrendered to General George Crook in 1883.

“Of all the eerie, dreary experiences, to be lost at night on the prairie … then to hear the chorus of coyotes, like hyenas, laughing at one’s predicament.” – An emigrant recalling her fear when she and her fellow travelers temporarily lost their bearings while crossing the Great Plains.

“Most of those he did kill deserved what they got.”  — A Lincoln County, New Mexico resident talking of Billy the Kid.

“Are you from California or Heaven?”  — A survivor of the Donner Party when rescuers appeared.

“I want results when I fight.” – Frank James

“I have always been willing to take the blame for the things I have done.” — Lillie Langtry

“I thought John was the nicest kindest gentleman that I had ever met, why even my parents thought he was polite and well mannered.”  — Beryl Ethel Hovious said of John Dillinger during an 1889 interview.

“You damn dirty cow thief, if you’re anxious to fight, I’ll meet you!”  — Wyatt Earp to Ike Clanton before the fight at the O.K. Corral.

“My mother always said that I would die with my shoes on.” – “Big Steve” Long’s last words after having asked to have his shoes removed before he was hanged.

“I didn’t want to send him to hell on an empty stomach.”  — Clay Allison after shooting “Chunk Colbert” at dinner.

“All I hope for is to get home, alive, as soon as possible, so that I can forget it.”  —  A disenchanted Forty-niner from the California Gold Rush

”I knew them both well and, in my opinion, Garrett was just as cold and hard a character as the Kid.” – Paulita Maxwell, referring to Pat Garrett and Billy the Kid.

“Listen, you’re job is to back me up, because you’d starve without me. And you, your job is to shut up.” — Butch Cassidy

“I wish I could find words to express the trueness, the bravery, the hardihood, the sense of honor, the loyalty to their trust and to each other of the old trail hands.” — Charles Goodnight

“I have acted fearless and independent and I never will regret my course. I would rather be politically buried that to be hypocritically immortalized.” — Davy Crockett