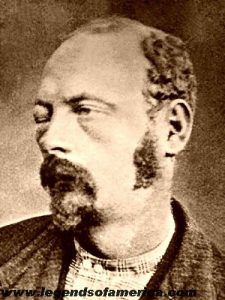 Thomas Coleman “Cole” Younger (1844-1916) – Confederate guerrilla and one of the leaders of the James-Younger Gang, Cole Younger was born on January 15, 1844, the seventh of 14 children of Henry Washington and Bersheba Leighton Fristoe Younger. Despite his father’s support of the Union, Cole supported pro-slavery Missouri after struggles began between Kansas and Missouri prior to the Civil War. He joined William Quantrill’s guerrillas in 1861 and took part in the Lawrence, Kansas raid on August 21, 1863, which left some 200 men and boys dead and the city ransacked and burned.

In 1864 he moved on to serve in the regular Confederate Army. He was soon made captain and led his men into Louisiana and later into California, where he remained until the close of the war. Cole returned to his home in 1865 to find the family farm in ruins.

An embittered Cole continued to associate with his old war comrades and in the midst of the tumultuous Reconstruction in Missouri, some former soldiers, including Cole Younger, turned outlaw.

Claiming to be taking revenge against Yankee capitalist banks and railroads, the James-Younger Gang made its first robbery on February 13, 1866, when the men stormed the Clay County Savings Association in Liberty, Missouri taking over $60,000 in cash and bonds.

Taking a leadership role in the James-Younger Gang, he participated in a number of bank, train and stagecoach robberies over the next several years, though he would insist until the end of his life that he never robbed a bank in Missouri.

Following the attempted Northfield, Minnesota bank robbery on September 7, 1876, which netted the gang nothing and resulted in gunplay with local citizens. Gang members, Clell Miller and Bill Chadwell were killed and Bob Younger was badly wounded through the elbow. Also killed were two townspeople, including the bank cashier, before the gang fled empty-handed. 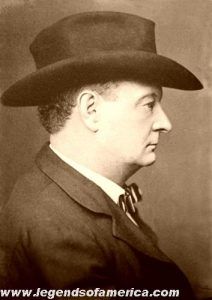 Near Mankato, the gang split up with the Younger brothers and Charlie Pitts going one way and the James brothers another. Though Frank and Jesse made it safely back to Missouri, the Youngers were not so fortunate. When a posse caught up with the four men near Madelia, Minnesota on September 21, 1876, a gunfight erupted, in which, Charlie Pitts was killed and the Younger brothers wounded. Finally, they surrendered. Tried in Faribault, Minnesota, they were found guilty of murder and sentenced to 25 years in the state prison at Stillwater.

After serving more than twenty years in prison, Cole was paroled in 1901 but was not allowed to leave the State of Minnesota. Cole, along with brother Jim sold tombstones and insurance for a time. Cole received an official pardon in 1903 and returned home to Lee’s Summit, Missouri. Cole reunited with Frank James in a touring Wild West show for a time and also went on the lecture circuit preaching the evils of crime. In 1903, he published a brief autobiography entitled, The Story of Cole Younger, in which he portrayed himself as a Confederate avenger rather than an outlaw. In his last years, he declared that he had become a Christian and was known as an elderly churchgoer in his hometown.  He died quietly on March 21, 1916, and is buried in the Lee’s Summit Historical Cemetery.

James “Jim” Hardin Younger (1848-1902) – Jim was born to Henry Washington Younger and Bersheba Leighton Fristoe Younger on January 15, 1848, in Harrisonville, Missouri. He was described as quiet and well-mannered, and more of a listener than a talker. He grew up to follow in Cole’s footsteps and joined Quantrill’s Confederate band of bushwhackers. He was later captured by Union troops in the same ambush that resulted in William Quantrill’s death. He was then sent to Alton prison until the end of the war. Afterward, he tried his hand at a number of jobs, including starting a horse ranch and served as a deputy sheriff in Dallas County, Texas in 1870-71. Two years later, he joined the James-Younger Gang and participated in the train robbery in Adair, Iowa in July 1873. 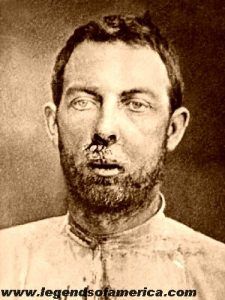 Jim Younger committed suicide while on parole in Minnesota after
serving 25 years in prison for the Northfield raid.

The following year, in March, Jim and his brother, John were headed to Roscoe, Missouri when they were approached by several men asking for directions. Suspecting that they were law officers, a shootout began and John was shot through the neck and died.

Also killed were St. Clair County Deputy Edwin Daniels and Pinkerton Agent Louis J. Lull. Jim managed to escape. After the death of his brother, he left the gang and spent the next two years working a ranch in San Luis Obispo, California.

Jim returned to the gang in time to join the ill-fated 1876 bank job in Northfield, Minnesota. Part of his jaw was shot off and he was captured and sentenced to life imprisonment. He was paroled in 1901 with his brother Cole. Jim fell in love with a newspaper writer, Alice Miller, but was not permitted to marry under the strict parole terms handed down by the state. Despondent, he killed himself on October 19, 1902. His body was returned to his home where he is buried in the Lee Summit Historical Cemetery in Missouri.

2 thoughts on “The Infamous Younger Brothers”