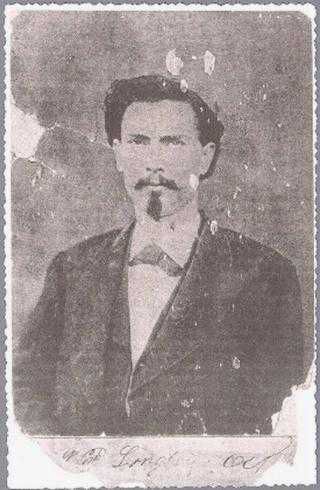 Longley was a ruthless murderer, killing his first man at the age of sixteen. Growing up with firmly held racist views, he was adamantly opposed to the government’s Reconstruction policy, a view that would lead to enough trouble that he would eventually be hanged.

William Longley was born at Mill Creek, Texas, to Campbell and Sarah Longley on October 6, 1851. When Longley was still very young, the family moved to Evergreen, Texas, where he went to school and worked on the family farm. Longley learned how to use a gun before he was a teenager and would soon prove to be one of the fastest draws in Texas with his deadly accurate aim and participation in numerous gunfights.

After the Civil War had ended, Texas Governor E.J. Davis created a state police force made up of mostly freed slaves. This incensed many Confederate Southerners who were still bitter over the war. One day in December 1866, while Bill and his father, Campbell, were in Evergreen, a black policeman who had been drinking came riding down the street waving his gun and cursing some of the local towns’ people.

When the police officer insulted his father, Bill stepped forward and told the man to lower his gun. Not knowing Bill’s accuracy, the lawman brought his gun up, pointing it at young Bill, who shot the man dead. Soon Longley took up with other young men and began terrorizing newly freed slaves, killing two more black men in Lexington, Texas.

By this time, Longley had earned a reputation as a fast draw and was often sought out by those wanting to establish themselves as feared gunmen. However, these challengers invariably lost when calling Longley into the street. Longley picked many fights with anyone he suspected of being a Yankee sympathizer or a carpetbagger. Standing six feet tall, he was also known to whip any black man who crossed his path.

During this time, Longley was supposedly involved with an outlaw gang led by Cullen M. Baker in Arkansas. Although, by some accounts, he was only traveling with a gang member and was accused by association.

Soon, he and his traveling companion were captured by a group of vigilantes and lynched as horse thieves. However, as the mob rode off, one man turned and aimed several shots at the pair. One bullet hit Longley in the face and broke a tooth, while another frayed the rope from which he was hanging. The rope weakened with the weight of Longley’s body and broke, saving his life.

In February 1870, Longley and his brother-in-law, John W. Wilson, killed a black man named Brice in Bastrop County. They were also accused of killing a black woman. In March, the military authorities offered a $1,000 reward for the pair. His brother-in-law Wilson died soon after, and Longley traveled north. 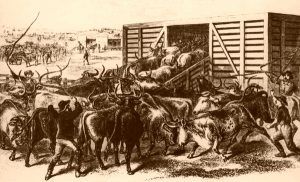 Later, Longley claimed to have worked as a trail driver in Abilene, Kansas, where he killed his trail boss, a man named Rector, after a disagreement.  He also professed to have killed a horse thief named McClelland. He then fled to Leavenworth, Kansas, where he killed a soldier for insulting the virtue of Texas women. This time he was arrested and convicted of murder. Though he was tried and sentenced to 30 years, he managed to escape.

Before long, Longley joined a gold-mining expedition in the Wind River Mountains of Wyoming Territory but was stranded when the United States Army stopped the group. In June 1870, he enlisted in the United States cavalry and promptly deserted. He was captured, court-martialed, and sentenced to two years confinement at Camp Stambaugh,  Wyoming  Territory. After about six months, he was released back to his unit, remaining until he again deserted on June 8, 1872.

Longley claimed that he lived and rode with Chief Washakie and the Shoshone Indians, which is questionable. He then returned to Texas via Parkerville, Kansas, where he professed to have killed a Charlie Stuart, of whom there is no record.

He returned to Texas and Bell County, where his parents had moved, and worked as a cowboy in Comanche County.  He allegedly killed a black man and engaged in a gunfight at the Santa Anna Mountains in Coleman County.

In July 1873, Longley was arrested in Kerr County by Mason County Sheriff J. J. Finney and was taken to Austin so that Finney could collect the reward. After several days, when the reward money had not been paid to Finney, he released Longley.  According to legend, Finney was paid off by a Longley relative.

In late 1874 Longley and his brother James Stockton Longley rode from Bell County to the Lee County home of their uncle, Caleb Longley, who implored Longley to kill Wilson Anderson for allegedly killing his son. On March 31, 1875, Longley shotgunned Anderson to death while Anderson was plowing a field, and the two brothers fled north to Indian Territory. In July, James Longley returned to Bell County and turned himself in.  James was later acquitted of any part in Anderson’s murder; however, Bill Longley remained a wanted man.

In November 1875, Longley killed George Thomas in McLennan County, then rode south to Uvalde County, where, in January 1876, he killed William (Lou) Shroyer in a stand-up gunfight.

February 1876 found Longley sharecropping for the Reverend William R. Lay in Delta County, Texas. A dispute with a local man over a girl led to Longley’s arrest; however, the jail couldn’t hold Longley.  Soon, he started a fire, and burning himself out, he escaped.  An account says that Longley was interested in the same girl the Reverend Lay’s nephew was and that the Reverend was trying to run off Wild Bill.  Bill wasn’t going to have someone push him around, and on June 13, 1876, he shot and killed the Reverend while milking a cow.

Longley then headed to Louisiana to hide until things cooled off in Texas.  However, the long arm of the law reached out, and he was captured in DeSoto Parish, Louisiana, by Nacogdoches County Sheriff Milton Mast. Longley was returned to Lee County to stand trial for the murder of Wilson Anderson.

Longley promptly began writing letters to the newspapers, telling them about his life adventures and claiming to have killed 32 men. He also wrote the governor, asking for clemency.  He stated in his letter that John Wesley Hardin, the most infamous gunman Texas ever produced, received only twenty-five years in prison for his forty killings. Why then, Longley wanted to know, was he being sent to the hangman?  The governor did not respond.

On September 5, 1877, the jurors of Lee County deliberated only 1 ½ hours before they sentenced William to death by hanging.

While appeals were being made, Longley was transferred to Galveston, Texas, where the authorities felt he would be safer from a mob of Longley’s victim’s survivors. In March 1878, the Court Of Appeals affirmed his conviction, and soon Wild Bill was returned to Giddings, Texas, to be hanged.

After being baptized into the Catholic Church on October 11, 1878, before a crowd of thousands in Giddings, Texas, Longley was led to the hangman’s noose by Lee County Sheriff James Madison Brown.  Having a sense of humor, Longley told them to repair a board before they went up the steps, stating that he would hate to trip and break his neck. 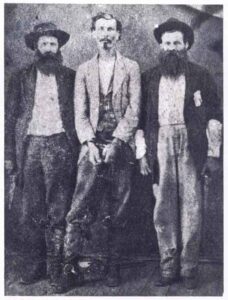 Before the crowd of some 4,000 people, Longley claimed that he had only killed eight men. Before Brown sent him down to his death, Longley held up his hand, saying:

“I deserved this fate.  It is a debt I have owed for a wild and reckless life.  So long, everybody!”

Then he nodded to the executioner and was sent downward through the trap to his death.

However, as fate would have it, a novice hangman cut Longley too much slack, and he landed feet first beneath the gallows, extending his life for the few minutes it took to correct the embarrassing situation.  Immediately the sheriff and several guards rushed downwards and held Bill’s feet off the ground so the rope could strangle him.

The Galveston Daily News on October 12, 1878, described the hanging:

“The black cap was drawn, the rope adjusted, the words “All ready” given, and at 2:37, the drop fell. The body fell eight feet, as was intended. The rope slipped on the beam, and the body continued until the feet touched the earth, when Sheriff Brown and an aid caught and raised it up and refastened it, leaving the body properly suspended. Two moans escaped the lips, the arms and feet were raised three times, and after hanging eleven and one-half minutes, life was pronounced extinct.

Texas outlaw Bill Longley was from a respectable family, but his hot temper, his fondness for liquor, and unsettled conditions during reconstruction led him to become one of the most daring gunslingers of his day. He is said to have killed 32 persons before his capture in 1877. Before Longley died, he repented and urged others to avoid his example. His grave was once outside the cemetery bounds. 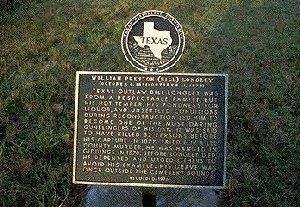 Bill Longley is buried in the Giddings Cemetery west of Giddings, Texas, on the south side of U.S 290.