Billy Campbell – A member of Jesse Evans Gang during New Mexico’s Lincoln County War. Nothing is known of life following the conflict.

William Campbell – A Texas cowboy and gunman, Campbell a gunfight erupted with Babe, and Andy Moye in Ogalalla, Nebraska after Campbell insulted Babe. When the smoke cleared, Campbell was dead.

John Cannon – A judge in Beckham County, Oklahoma, who was killed in a duel with a man named Hamlet on December 2, 1915. Cannon was shot five times and died almost instantly.

Manuel Cardenas – A gunman, Cardenas was suspected of murder in November 1875 at Cimarron, New Mexico.

George Carrhert – A Montana gunman, he was killed in Bannack during a duel in 1863.

Joe Carson – Gunman, city marshal and member of the Dodge City Gang in Las Vegas, New Mexico, he was killed in a saloon gunfight.

“Tex” Carter – A gunfighter for Jim Lacy, Opium Bob, and Dutch Charley Bates, Carter escaped a lynch mob on March 22, 1881, at Rawlins, Wyoming, and later became a sheriff in Nebraska.

Samuel E. Chamberlain, aka Peloncillo Jack – A gunman and mercenary in the 1840s, he later became a general in the Civil War. He died in Worcester, Massachusetts, in 1908.

John Chambers –  A member of the John Kinney Gang during New Mexico’s Lincoln County War. After the gang broke up, he disappeared. Florencio Chaves – Fought with the Regulators in the Lincoln County War of New Mexico. He survived the conflict and died in Lincoln, New Mexico, in the 1930s.

Martin Chaves – A gunman who died on December 8, 1931, of natural causes at Santa Fe, New Mexico.

Jose Chavez y Chavez – Fought with the Regulators in the Lincoln County War of New Mexico. He died of old age at Milagro, New Mexico, on July 17, 1923.

“Cherokee Bob” – A gunman in the 1860s in mining camps of Idaho and Montana.

Fred Chilton – A cowboy and gunman, he was one of three cowboys killed by Len Woodward on March 21, 1886, at Tascosa, Texas.

Benjamin Clark – A gunman and Indian scout, fought and killed renegade and hostile Indians most of his life. He served with Bat Masterson and scouted for General Nelson Miles in the Indian Wars of 1874.

Jap Clark – A New Mexico gunman who survived the last days of the Old West. He was imprisoned in 1908. 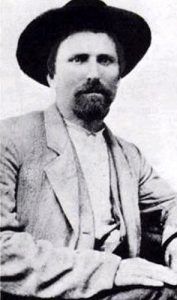 Emmanuel “Mannen” Clements, Sr. (18??-1887) – A rancher, outlaw, and gunfighter, Mannen Clements headed up a violent and ruthless Clements family in McCulloch County, Texas. He was killed at Ballinger, Texas, on March 29, 1887.

Emmanuel “Mannie” Clements, Jr. (18??-1908) – Served under Sheriff Dave Allison as a deputy sheriff at Pecos City, Texas. He later worked for Jim Miller during the Miller-Frazer feud in Pecos, Texas, in 1891. While serving as a lawman in EI Paso, Texas, he was killed on December 29, 1908.

James Clements – A gunman, brother of Emanuel Sr., and cousin of John Wesley Hardin, he drove cattle with Hardin and helped him several Mexican herders near Newton, Kansas, in 1871.

John Gibson “Gip” Clements – A gunman and youngest of the Clements brothers, John was born on May 14, 1854. When he grew up, he helped cousin John Wesley Hardin disarm several deputies of Wild Bill Hickok’s in 1871 and send them back to Abilene, Kansas, without their pants. Clements died in Runnels County, Texas, on November 4, 1829. He is buried in an unmarked grave in the Miles Cemetery in Runnels County, Texas.

Joseph Clements – A cowboy, gunman, and one of the Clements brothers, he trailed John Wesley Hardin’s herd in 1874 to Comanche County.

John P. Clum – A gunman and Apache Indian agent in Arizona, he sided with the Earps against the “cowboys” in Tombstone.

Thomas Cochran – A member of the Jesse Evans Gang in New Mexico and a gunman in the Lincoln County War, he was a member of the posse that killed John Tunstall. He later moved to Arizona, where he died sometime after 1887.

Frank Coe (18??-1931) – As a young man, Coe drifted to Lincoln County, New Mexico, where he worked as a farmer and ranch hand. Frank and his cousin George, who regularly served as the fiddlers at local dances, jointly invested in the county’s first thresher. But just as their financial situation improved, the Lincoln County War broke out, and both cousins found themselves fighting with the McSween faction. When the shooting subsided, the Coes moved to San Juan County, then left New Mexico. In 1884 the Coes returned to Lincoln County, and Frank and his wife of three years settled on a ranch which, in 1873, had been leased by the murderous Horrell brothers from Lampasas, Texas. Coe lived on this ranch until he died in 1931; he was survived by six children and his wife of 50 years.

George Washington Coe (1856-1941) – The son of a Civil War veteran who had migrated to a Missouri homestead from Iowa, George Coe went to Fort Stanton, New Mexico, in 1874 to work on the ranch of a cousin. By 1878, Coe had leased his own spread in Lincoln County, but the area was on the verge of all-out war, and Coe soon found himself arrested unjustly by Sheriff William Brady. While he was in jail, he was subjected to physical torture, and upon his release, he bitterly determined to seek revenge. In the subsequent Lincoln County War, he fought with the Regulators, figuring prominently in the gunfight with Buckshot Roberts and in assorted other shooting scrapes.

His activities in the Lincoln County War made him a wanted man, and he moved with his relatives to San Juan County. Eventually, Coe obtained amnesty from New Mexico Governor Lew Wallace. After brief sojourns in Nebraska and Colorado, he returned to Lincoln County in 1884, where he homesteaded what became known as the Golden Glow Ranch and operated a store there. He lived the rest of his life as a family man and respected member of the community, living in peace until he died in 1941.

Chunk Colbert (18??-1875) – Colbert established a reputation as a gunman during the early 1870s, reputedly killing seven men in West Texas, New Mexico, and Colorado. He was killed by Clay Allison on January 7, 1875, in New Mexico. 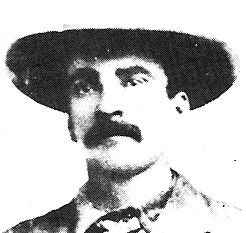 Scott Cooley (1845-1876?) – Cooley was an honorable man for the first 30 years of his life and served as a Texas Ranger. However, that changed with his participation in the Mason County War. After being involved in the murders of several men, he reportedly died of brain fever in 1876.

Jim Cooper – A gunman and rancher, he participated in the Lee-Good feud in Tularosa, New Mexico.

Timothy Isaiah Courtright, aka Long-Haired Jim (1848-1887) – A lawman and outlaw, Courtright was elected city marshal of Fort Worth, Texas, in 1876. He became a U.S. Deputy Marshal in 1883 and participated in the American Valley murders in New Mexico, after which he became a fugitive. He was later acquitted. Luke Short killed him in a gunfight in 1887.

Charlie “Lollycooler” Crawford (18??-1878) – A member of the Seven Rivers Warriors during the Lincoln County War in New Mexico, he was killed by  Regulator Herrera in Lincoln, New Mexico on July 17, 1878.

David “Davy” Crockett (1853?-1876) – A gunman and outlaw, Crockett was the nephew of the more famous Davy Crockett of Alamo fame. After escaping from a Texas prison in 1872, he made his way to Cimarron, New Mexico, where he and an accomplice killed three black soldiers in cold blood. He was later shot dead while resisting arrest.