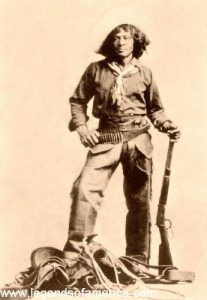 Mounted on my favorite horse, my… lariat near my hand, and my trusty guns in my belt… I felt I could defy the world.

Born in June 1854 as a slave on Robert Love’s plantation in Davidson County, Tennessee, Nat (pronounced Nate) Love would grow up to be one of the most famous cowboys in the Old West.

Raised in a log cabin, Nat’s father had become a slave foreman on the plantation, and his mother worked in the kitchen of the “big house.” He was looked after primarily by an older sister when he was young, but she, like her mother, had duties in the kitchen, so Nat primarily looked after himself. Though he had no formal education, with help from his father, he learned to read and write.

After the Civil War, when the slaves were freed, Nat’s father worked a small farm he rented from his former master, Robert Love. But, freedom was short-lived for the former slave, as he died just a few years later.

Nat then took various jobs on area plantations to help support the family and found that he had great skill in breaking horses.

In 1869, Love left his family in an uncle’s care and headed west with $50 in his pocket. When he reached Dodge City, Kansas, he ran into the crew of the Texas Duval Ranch. Having just brought a herd to the Kansas railhead, the cowboys were having breakfast when Nat joined them. The young man soon approached the trail boss, asking for a job. The boss agreed that Nat could join them if he could break a horse named Good Eye. The wildest horse in the outfit, Nat would later say it was the toughest ride he’d ever had. But ride he did and got the job with the Duval Ranch at $30 a month.

The 16-year-old quickly adapted to the life of a cowboy, showing excellent skills as a ranch hand, and practiced so often with a .45 revolver that his shooting skills also became very good. Earning a reputation as one of the best all-around cowboys in the Duval outfit, he soon became a buyer and their chief brand reader. In this capacity, he was sent to Mexico several times and soon learned to speak fluent Spanish.

After three years with the Duval Outfit, Love moved to Arizona in 1872, where he worked for the Gallinger Ranch on the Gila River. He traveled many of the major western trails, sometimes working in dangerous situations in Indian battles and fighting off rustlers and bandits. During these years as an Arizona cowboy, Nat was referred to as Red River Dick and claimed to have met many famous men of the West, including Pat Garrett, Bat Masterson, and Billy the Kid.

In the spring of 1876, the Gallinger cowboys were sent to deliver a herd of three thousand steers to Deadwood, South Dakota. When the crew arrived on July 3rd, the locals were busy preparing for a 4th of July celebration. One of the many organized events included a “cowboy” contest with a $200 cash prize to the winner.

The contestants competed in roping, bridling, saddling, and shooting. Winning every competition, Nat walked away with the $200 prize and the nickname of “Deadwood Dick.” 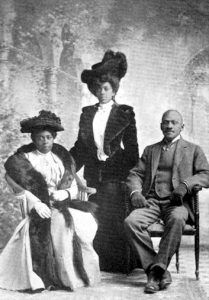 Nat continued to work as a cowboy in the southwest for another 15 years before settling down and getting married in 1889. The following year he took a job in Denver, Colorado as a Pullman porter on the Denver and Rio Grande Railroad. He worked on the routes west of Denver and moved his family several times to Wyoming, Utah, and Nevada before settling in southern California.

In 1907, Nat Love published his autobiography, The Life and Adventures of Nat Love, Better Known in the Cattle Country as “Deadwood Dick,” a tale that tended to take on the epic proportions more noted in the many “dime novels” of the time.  Though he boasts in the book that everything happened, there is little external verification, such as those famous western men that Love allegedly met.

In other cases, there are no records for the cattlemen he said he worked with and for. As to what portion of the book is fact, and what is fiction will never be known; however, that didn’t stop the American public, hungry for tales of the west, from avidly reading the book.

Love’s last job was as a courier for the General Securities Company in Los Angeles, California.

Further reading: The Life and Adventures of Nat Love Better Known in the Cattle Country as “Deadwood Dick,” by Himself (University of North Carolina at Chappel Hill)