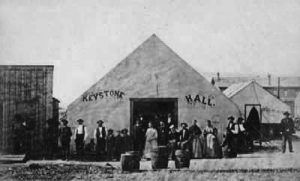 “Big Steve” Long allegedly served on the Confederate side of the Civil War before becoming a professional gunfighter. He landed in Wyoming in 1866, where he joined with half-brothers Ace and Con Moyer in establishing a saloon in Laramie City. The Moyer brothers founded the town, appointing themselves as justice of the peace and marshal, respectively. Steve Long was made the deputy marshal in 1867.

Long quickly earned a reputation as an extremely violent lawman, killing eight men in gunfights within two months. Ruling with an iron hand, the trio meted out “justice” in the saloon’s back room, ordering ranchers to sign over deeds to their lands and miners to hand over their claims. Those who refused were shot to death by Long on the pretense that the victim reached for a weapon. 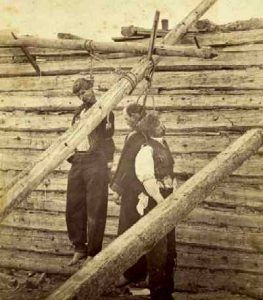 Numerous others were killed when they objected to crooked card games run at the saloon. By October 1868, Long had killed thirteen men and was suspected of killing another seven who died under suspicious circumstances. The violence became so prevalent that the townsfolk began to refer to the saloon as “The Bucket of Blood.”

Meanwhile, a local rancher by the name of N.K. Broswell began to talk of forming a vigilante group to put the trio out of business.

Long also was in the habit of moonlighting as a thief, and on October 18, 1868, he attempted to ambush and rob prospector Rollie “Hard Luck” Harrison. In the ensuing gunfight, Harrison was killed, and Long was shot. Though wounded, he was able to make it home. While Long’s fiancée treated the wound, he confessed to her what had happened and incensed, she told N.K. Broswell. Wasting no time, Broswell gathered up several men in the town, and they stormed into The Bucket of Blood on October 28, 1868.

Seizing Long and the Moyer brothers, the mob dragged them to a partially finished cabin, where they began to string them up to the rafters. But before he could be strung up, Long asked the vigilantes to remove his boots. His last words were, “my mother always said that I would die with my shoes on.” He was hanged with his bare feet dangling.