One of the oldest National Parks in the nation, the Grand Canyon National Park’s great chasm, carved over millennia, is one of the major natural wonders of the world. With its awe-inspiring views, turbulent Colorado River, numerous hiking trails, and recreational opportunities, the park is visited by more than 5 million tourists each year.

An extensive system of tributary canyons, the National Park covers more 1,900 square miles, with the canyon itself being 217 miles long, one mile deep, and its width varying from 4 to 18 miles.

The history of people within the canyon stretches back 10,500 years when the first evidence for human presence in the area has been documented. Native Americans have been living at or near the Grand Canyon for at least the last 4,000 of those years, the first of which were the Anasazi. 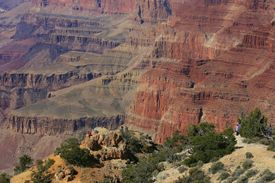 These ancient Indians inhabited the rim and inner canyon, surviving by hunting and gathering along with some limited agriculture. Later the Cohonina tribe lived west of what is now the current site of Grand Canyon Village. However, by the late 13th century, both tribes had moved on, most likely due to drought.

For approximately 100 years the canyon area was uninhabited by humans. The Paiute from the east and Cerbat from the west were the first humans to reestablish settlements in and around the Grand Canyon. The Paiute settled the plateaus north of the Colorado River and the Cerbat built their communities south of the river, on the Coconino Plateau. Sometime in the 15th century the Navajo, or the Dine, arrived in the area.

The first documented case of Europeans viewing the Grand Canyon occurred in September of 1540. That year Hopi guides led a group of 13 Spanish soldiers under Captain Garcia Lopez de Cardenas to find the fabled Seven Cities of Cibola for his superior officer, the conquistador Francisco Vasquez de Coronado.

The group arrived at South Rim of the Grand Canyon between Desert View and Moran Point and saw a river below. Pablo de Melgrossa, Juan Galeras and a third soldier descended one-third of the way into the Canyon until they were forced to return because of lack of water. It is speculated that their Hopi guides must have been reluctant to lead them to the river, as they surely knew the route to the canyon floor.

Failing in their attempts to find gold, the Spaniards soon left the area and it would be more than two centuries before it was once again visited by Europeans.

In 1776, Fathers Francisco Atanasio Dominguez and Silvestre Velez de Escalante traveled with a group of Spanish soldiers to explore southern Utah. One their journey the group traveled along the North Rim of the Canyon in Glen and Marble Canyons in search of a route from Santa Fe, New Mexico, to Monterey, California.

The next Europeans to reach the canyon were James Ohio Pattie and a group of American trappers in 1826. However, there is little or no documentation of their travels.

The signing of the Treaty of Guadalupe Hidalgo in 1848 ceded the Grand Canyon region to the United States. Jules Marcou of the Pacific Railroad Survey made the first geologic observations of the canyon and the surrounding area in 1856. 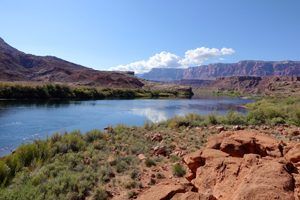 Lees Ferry site at Glen Canyon on the Colorado River by the National Park Service.

At about the same time Jacob Hamblin, a Mormon missionary, was sent by Brigham Young to locate easy river crossing sites in the canyon. Building good relations with local Native Americans and white settlers, he discovered the sites of what would become Lee’s Ferry and Pearce Ferry — the only two sites suitable for ferry operation.

In 1857 a U.S. War Department expedition was led by Lieutenant Joseph Ives to investigate the area’s potential for natural resources, find railroad routes to the west coast, and assess the feasibility of an up-river navigation route from the Gulf of California. The group traveled in a stern wheeler steamboat named the Explorer. After two months and 350 miles of difficult navigation, his party reached Black Canyon. In the process, the Explorer struck a rock and was abandoned. The group then traveled eastwards along the South Rim of the Grand Canyon. 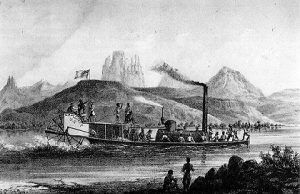 A man of his time, Ives discounted his own impressions on the beauty of the canyon and declared it and the surrounding area as “altogether valueless,” remarking that his expedition would be “the last party of whites to visit this profitless locality.”

Attached to Ives’ expedition was geologist John Strong Newberry who had a very different impression of the canyon. After returning, Newberry convinced fellow geologist John Wesley Powell that a boat run through the Grand Canyon to complete the survey would be worth the risk. Powell was a major in the United States Army and was a veteran of the Civil War, a conflict that cost him his right forearm in the Battle of Shiloh, Tennessee. 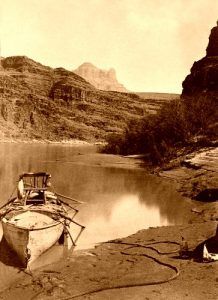 More than a decade after the Ives Expedition and with help from the Smithsonian Institution, Powell led the first of the Powell Expeditions to explore the region and document its scientific offerings. On May 24, 1869, the group of nine men set out from Green River Station in Wyoming down the Colorado River and through the Grand Canyon. This first expedition was poorly-funded and consequently, no photographer or graphic artist was included. While in the Canyon of Lodore one of the group’s four boats capsized, spilling most of their food and much of their scientific equipment into the river. This shortened the expedition to 100 days. Tired of being constantly cold, wet and hungry and not knowing they had already passed the worst rapids, three of Powell’s men climbed out of the great chasm in what is now called Separation Canyon. Once out of the canyon, all three were killed by a band of Paiutes who thought they were miners that had recently molested one of their females. All those who stayed with Powell survived, successfully running most of the canyon.

Two years later a much better-funded Powell-led party returned with redesigned boats and a chain of several supply stations along their route. This time, photographer E.O. Beaman and 17-year-old artist Frederick Dellenbaugh were included. Beaman left the group in January 1872 over a dispute with Powell. Beaman’s replacement, James Fennemore, quit in August that same year due to poor health, leaving boatman Jack Hillers as the official photographer (nearly one ton of photographic equipment was needed on-site to process each shot.)  Famed painter Thomas Moran joined the expedition in the summer of 1873, after the river voyage and thus only viewed the canyon from the rim. His 1873 painting “Chasm of the Colorado” was bought by the United States Congress in 1874 and hung in the lobby of the Senate. 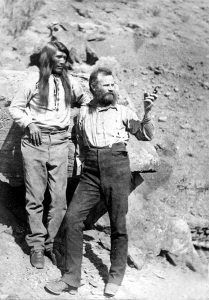 John D. Lee (of Mountain Meadows Massacre fame) was the first person who catered to travelers to the canyon. In 1872 he established a ferry service at the confluence of the Colorado and Paria rivers. Lee was in hiding, having been accused of leading the Mountain Meadows Massacre in 1857. He was tried and executed for this crime in 1877. During his trial he played host to members of the Powell Expedition who were waiting for their photographer, Major James Fennemore, to arrive (Fennemore took the last photo of Lee sitting on his own coffin). Emma, one of Lee’s nineteen wives, continued the ferry business after her husband’s death. In 1876 a man named Harrison Pearce established another ferry service at the western end of the canyon.

The Powell expeditions systematically cataloged rock formations, plants, animals, and archaeological sites. Photographs and illustrations from the Powell expeditions greatly popularized the canyon land region of the southwest United States, especially the Grand Canyon. Powell later used these photographs and illustrations in his lecture tours, making him a national figure. Rights to reproduce 650 of the expeditions’ 1,400 stereographs were sold to help fund future Powell projects. In 1881 he became the second director of the U.S. Geological Survey.

Geologist Clarence Dutton followed up on Powell’s work in 1880–1881 with the newly-formed U.S. Geological Survey. Painters Thomas Moran and William Henry Holmes accompanied Dutton, who was busy drafting detailed descriptions of the area’s geology. The report that resulted from the team’s effort was titled A Tertiary History of The Grand Canyon District, with Atlas and was published in 1882. This and later studies by geologists uncovered the geology of the Grand Canyon area and helped to advance that science. Both the Powell and Dutton expeditions helped to increase interest in the canyon and the surrounding region.