The recent epidemic of train robbing in different sections of the country has naturally caused considerable discussion as to the best means of checking this peculiar class of crime. Train robbing has been practiced pretty steadily in the South and West during the last twenty years, but during the last few months outrages of this character have increased at an alarming rate. The greater portion of these occurred south and west of the Missouri River. Texas, more than any other state, has suffered from this newest and just now most threatening form of crime.

My experience with train robbers began with the earliest operations of these daring criminals. There were no train robberies of any importance before the war. The first our agency had to do with were perpetrated by the Reno brothers, of Seymour, Indiana.

Four of these brothers became noted as train robbers. They commenced their robberies immediately after the war and became terrors to the community in which they lived. It was impossible to get the necessary evidence to convict them, as, to a certain extent, they controlled, through terrorizing, some of the local judges; and the local authorities, either through sympathy or fear, were afraid to do their duty. 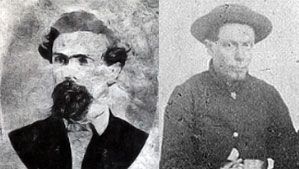 The downfall of this gang commenced in 1867 with the arrest of John Reno, who, in company with others, had robbed the county treasurer’s safe at Savannah, Missouri. He was tracked back to Seymour, and, as there was no chance of his being extradited, a party of masked men went into Seymour and bodily carried him on board a train that was about to start for Missouri, where he was convicted and sentenced to twenty-five years of imprisonment. Later on, Frank, William and Sim Reno committed a number of train robberies throughout Indiana, extending their operations as far west as Iowa. In the winter of 1868 they “held up” a train near Marshfield station, Indiana, forced their way into the Adams Express car, threw the messenger from the car while the train was under headway and robbed the Express Company of $80,000. Sim and William Reno were arrested at Indianapolis. Frank Reno and Charles Anderson, another of this gang, were also arrested at Windsor, Canada. After bitterly contesting their extradition in all the courts of Canada they were finally brought to Indiana and confined in the jail at New Albany. The people in the vicinity of Seymour became aroused to the fact that war had actively commenced against the Reno brothers, and, as they had been terrorized by these men for years, they were willing to take a hand in exterminating them.

One stormy night the jail at New Albany was surrounded by a band of masked men, the sheriff and jailer were overpowered and the three Renos and Anderson taken from their cells and hanged in the corridors of the jail. Their execution was rapidly followed by that of the other members of the gang, their sympathizers, and abettors, who lived in the vicinity of Seymour, no less than nine being hanged by the vigilance committee. For years after that, and in fact, up to the present time, Seymour, Indiana, has been noted as a model, flourishing city, and I do not recall a single case of train robbing in southern Indiana since the execution of the Renos, whereas previous to this a train was usually robbed there about every sixty days. 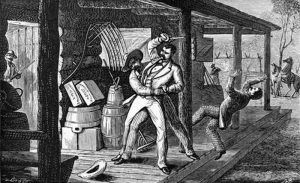 The next train robbery of any importance was committed by Levi and Hillary Farrington, William Barton and William Taylor. These people came from western Tennessee. Levi Farrington was arrested by us at Farmington, Illinois, after making a desperate resistance. We arrested Hillary Farrington and William Barton near Venetta, Indiana Territory. The house where they were in hiding was surrounded by a posse, the door broken down, and the house fired when they were compelled to come out with their “hands up.” William Taylor was arrested by our men at Red Foot Lake, in western Tennessee. While conveying Hillary Farrington and William Barton from the Indiana Territory to Union City, Barton made a complete confession as to the other members of the gang and what had been done with the proceeds of the robberies.

While traveling from Cairo, Illinois to Columbus, Kentucky, I was about to enter the barroom of the steamer, when Hillary suddenly seized a large pistol which was sticking from my overcoat pocket and tried to conduct a murderous assault on me.

During the struggle which ensued for the possession of the pistol, Hillary Farrington fell over the low railing of the boat, nearly dragging me with him, and was drowned. Levi Farrington was the most desperate of the gang. When he was brought to Union City, Tennessee, the citizens held a jollification meeting, as he had shot and killed a marshal and his deputy in eastern Missouri and a deputy sheriff in Tennessee.  About two o’clock in the morning, fifty masked men came to the house where he and the other prisoners were under guard, as the town jail was not strong enough to hold them. They overpowered the guards, dragged out a man who had attempted to rescue Farrington and hanged him. Levi Farrington was shot in his room, his body being fairly riddled with bullets. William Taylor and William Barton pleaded guilty and were sentenced to long terms of imprisonment in Tennessee.

The capturing and sentencing of the members of this gang were the means of breaking up train robberies in western Tennessee. There has not been a train robbery in that vicinity since 1871, the date of the execution of these men. The Farringtons were among the most desperate of this class of men that I have ever known and were as successful as any of the desperadoes who have been engaged in “holding up” and robbing trains.

The next train robbers of any importance were the James and Younger brothers of western and southwestern Missouri. The robbery that brought them into prominence occurred at a small station on the Iron Mountain Railway, known as “Gad’s Lull,” where they “held up” the train and got a large amount of money from the Adams Express Company’s safe. This was in 1873. A short time previous to this they had robbed the safe of the Hot Springs stagecoach, holding up the coach with its twelve passengers and taking all the express money. One of our best men, Joseph Whicher, was detailed to go to the neighborhood of the home of the James boys and obtain work as a farmhand. He was dressed up as a farmer, his hands being hardened and his skin darkened in order to complete the disguise.

About dark, he approached the home of the James’, knocked at the door and applied for work. The door was opened by Mrs. Samuels, the mother of the James brothers, who invited him in and gave him a chair.

While he was seated the door was suddenly thrown open and he was confronted by Jesse and Frank James and some of their followers, who entered and accused him of being a detective. This he denied. The Jameses, however, said they were at war with all police officials and taking him from the house, gagged and bound him, tied him to a horse and took him across the old Blue Mill Ferry, telling the ferryman that he (Whicher) was a horse thief, whom they were going to deliver up to the authorities.