The St. Louis-San Francisco Railway, more familiarly known simply as the “Frisco,” was a dominant railroad line throughout the south-central United States, primarily in Missouri, Arkansas, Oklahoma, and Kansas.

Incorporated in Missouri on September 7, 1876, the St. Louis and San Francisco Railroad was formed from the Missouri Division and Central Division of the Atlantic and Pacific Railroad, which had gone bankrupt. Many of these original tracks were created by the Pacific Railroad of Missouri as early as 1855. However, building was dramatically cut back during the Civil War. 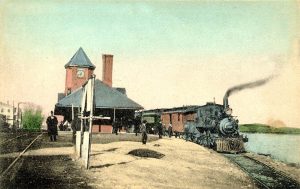 The Frisco acquired rights-of-way through much of the region and had an interest in developing the land, which would eventually bring people to an area. This development often led the way for westward expansion in the second half of the nineteenth century and the development of several towns.

The tracks were aggressively expanded into Oklahoma and Kansas, and by the 1880s, was completed through Tulsa to Sapulpa, Oklahoma. After the turn of the century, the Frisco completed the line through Kansas and Oklahoma and into Texas. In 1901 the Railway expanded to the Southeast and by the 1920s, had reached the Gulf of Mexico at Pensacola, Florida.

However, Frisco’s rapid expansion and acquisitions also caused financial difficulties for the line by 1912. That year, levees along the Mississippi River gave way, flooding the mainline for more than a month and a half, hurting its revenue further. Beginning in 1913, the railroad went into receivership for three years, and in August 1916, it was reorganized as St. Louis-San Francisco Railway. 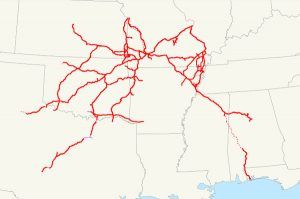 From March 1917 through January 1959, the Frisco, in a joint venture with the Missouri-Kansas-Texas Railroad, operated the Texas Special. This luxurious streamliner ran from St. Louis, Missouri to Dallas, Ft. Worth, and San Antonio, Texas.

After World War I, the Frisco struggled through the 1920s and 1930s, falling into receivership again in 1932 and abandoning many of its branch lines. However, it continued, and after World War II, it was a much leaner company emphasizing its profitable freight lines.

With the rise of automobile use and the interstate system, passenger service declined on all rail lines during the 1950s, and the Frisco began to terminate its passenger services. The Frisco became part of the Burlington Northern Railroad system in 1978, which joined with the Santa Fe Railroad to become the Burlington Northern Santa Fe (BNSF) in 1995. 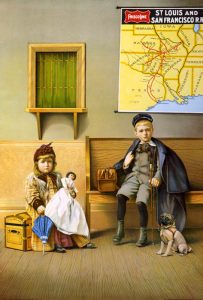 Despite its name, the railroad never went west of Texas.