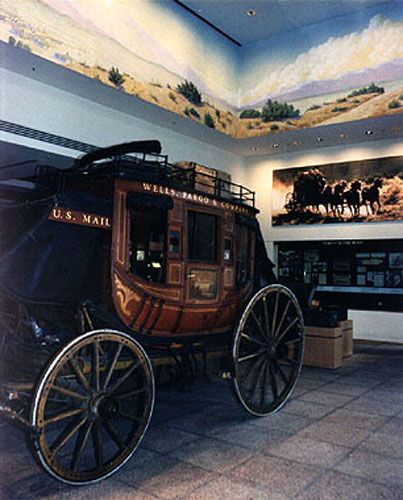 Wells Fargo began when prosperous New York businessmen, Henry Wells, and William Fargo saw a great opportunity in the west after gold was discovered. The pair, who had helped to found American Express in 1850, officially created Wells Fargo & Co. on March 18, 1852, with two primary objectives – transportation and banking.

In California, where no railroads yet existed, the Wells, Fargo & Co Express, planned to provide “express” services to the many miners flooding to the area, as well as freight services to businesses. Its banking division, Wells, Fargo & Co Bank advertised both financial services and general forwarding businesses for mail, valuable deliveries, and freight.

Within the year Wells Fargo established its first office in San Francisco, soon followed by offices in Sacramento, Monterey, and San Diego, and within no time, in almost every mining camp in California.

In its early days, Wells Fargo did not operate its own stagecoaches, rather, they sub-contracted and invested in those already in business. They were primarily an express company. Ken Wheeling, a leading expert on wagons, carriages, and stagecoaches, wrote in 2006:

“Although Wells, Fargo & Company shared board members with several stagecoach companies, it was not primarily in the stagecoach business. It was, first and foremost, an express company, concerned with expedition the shipment of almost anything between a paying sender and an intended addressee. At times, it found it necessary to subsidize this or that stage company in order that its own shipping business might not suffer from want of a carrier.“ 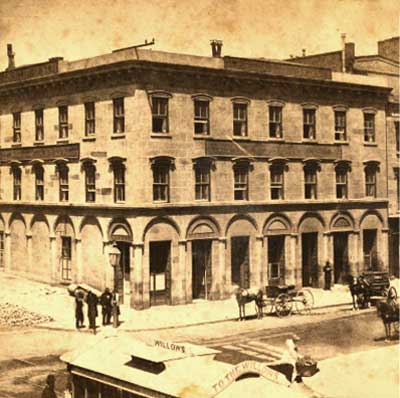 One of its earliest and most important tasks included the transportation of gold from the Philadelphia Mint, a service Wells Fargo retained until a United States Mint was opened in San Francisco in April 1854. Another important task serviced by Wells Fargo was mail delivery. Though post offices were first established in California in 1848, the public preferred the express companies, as they were cheaper and faster than the U.S. Mail.

By 1855, mining activity had begun to decline in California and several banks failed. However, Wells Fargo remained, soon to become the dominant express and banking organization in the west. At that time, they were the only company making large shipments of gold and continued to serve miners by delivering mail and supplies.

In 1857, Wells Fargo helped back the new Overland Mail Company, which provided for regular twice-a-week mail service between St. Louis and San Francisco. The Overland Mail Company was organized by men with large interests in four of the leading express companies; Wells Fargo, American Express, United States Express, and Adams Express. John Butterfield, one of the founders of American Express, was made president of the new company, with Wells Fargo being its primary lender.

Nicknamed the “Butterfield Line” after its president, the Overland Mail ran 2,757 miles through the Southwest via El Paso, Tucson, and Los Angeles, before arriving in San Francisco. The trek over deserts and mountains took about 25 days, stopping only to change horses or for passengers to get food.

However, Wells Fargo would still often use its own wagons and guards, as the Overland Mail Company forbade the shipment of any valuables. Noted Overland Mail historian Gerald T. Ahnert points out John Butterfield’s order No. 8 in the Overland Mail’s Special Instructions issued to employees that states “No money, jewelry, banknotes, or valuables of any nature, will be allowed to be carried under any circumstances whatever.”

John Butterfield was forced out as president of the Overland Mail in 1860, and Wells Fargo increased its investment in the company. By the early 1860s, Wells Fargo had a monopoly in California on the express business, sporting some 147 offices.

When the Civil War broke out, the route changed, moving northward across the Great Plains and over the Rocky Mountains, before snaking its way to California.

In 1866, Wells Fargo expanded its operations again, buying, what was then, Ben Holladay’s Overland Mail Express, and consolidating all the other independent companies on what was known as the “Central Route”, to create the largest stagecoach company in the world. They controlled virtually all the stage lines from Mississippi to California. It was 1867 when Wells Fargo finally achieved the total running of a stage line with its logo actually on the side of a stagecoach. They placed their first order for 30 Concord stagecoaches with Abbot-Downing & Company on April 20, 1867.

During these fast and furious stagecoach heydays, Wells Fargo also became the primary focus of bandits and thieves. One of the most famous of these was Black Bart, who robbed 28 stages before he was finally apprehended.  But Black Bart was just one of the many men who attempted to make a career of robbing stagecoaches; others included the James-Younger Gang, the Red Jack Gang, “Rattlesnake Dick,” and dozens of others.  During the 1860s the company suffered 313 stagecoach holdups totaling to the amount of $415,000.

In the meantime, the railroad had been hammering its way across the west and in 1869 the Gold Spike joined the rails of the Transcontinental Railroad. This ended many of Wells Fargo’s overland stage operations; however, they continued on a smaller scale, traveling into the many places that the railroad had not yet reached.  The company also evolved into the railroad express business, which became its major focus until the early 20th century.

Wells Fargo was the target of bandits both on trains and on stagecoaches. The first big train robbery occurred in 1870 when the Central Pacific out of Oakland was held up near Truckee, California and seven masked men got away with $42,000 in gold and gold coin. As a result, Wells Fargo hired James B. Hume as its Chief Detective. Hume was with the company for 32 years and became one of the most famous detectives in the country. During his tenure, it was said: “There are two institutions dangerous for bad men to tinker with— the United States Government and Wells Fargo.”

By the turn of the century, Wells Fargo had more than 3,000 offices in nearly every state and in Mexico.

Wells Fargo was told to “throw down the box” from a Concord stage for the last time in 1908. The bandits were immediately pursued, this time in automotive vehicles. The last horse-drawn stage carrying Wells Fargo cargo ran between Tonopah and Manhattan, Nevada, in 1909.

Over the years, a number of mergers and acquisitions occurred changing both its banking and express operations. In 1918, the express company merged into the American Railroad Express Company, leaving only the banking portion to hold the title of Wells Fargo.

The company also sponsors nine museums throughout the country that display its rich history, real stagecoaches, and gold nuggets, rare and authentic exhibits, and special tours and educational programs with advance reservations.