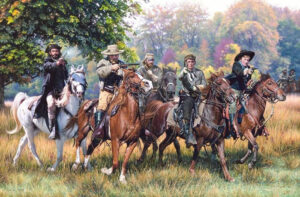 In the early 1870s, brothers Levi and Hillary Farrington, from near Gilliam Station, Tennessee began to rob trains.

Prior to that time Hillary and Levi were Confederate guerillas who had joined the Partisan Rangers under the command of William Quantrill and had been with him when he burned and sacked Lawrence, Kansas on August 21, 1863. When the Civil War was over, the two became outlaws.

In July 1871 Levi and Hillary Farrington, William Taylor, George Bertine, and William Barton, a former railroad brakeman, robbed a Southern Express car on the Mobile and Ohio Railroad at Moscow, Kentucky. They successfully made off with $1600.

On October 21, 1871, the same group robbed the northbound Mobile & Ohio Railroad at Union City, at Union City, Tennessee. After overpowering a guard and the messenger, they robbed the safe of the Southern Express Company and made off with about $6000. 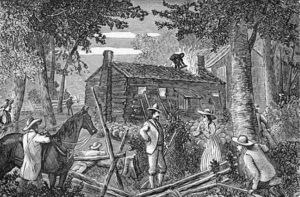 Burning out the outlaws

William Pinkerton with Patrick Connell, Special Agent of the Southern Express Company, tracked the men to the Mississippi River, where an overturned skiff was found. After a thorough scouring of the country and up and down the river, the detectives learned that a party of strange men were in a swamp near Lester’s Landing, Tennessee. There, the outlaws had opened a small store, to cover their real business of train robbery. Calling in additional help, Pinkerton and Connell surrounded the store and a gunfight broke out. Henry Bertine was killed and the others escaped.

Hillary Farrington was soon tracked to Verona, Missouri and with the aid of a deputy sheriff and local residents, the house was surrounded and when Farrington refused to surrender, it was set on fire when the outlaw finally came out and was arrested.

A few days later Union City Marshal and Robert A. Pinkerton arrested Levi Farrington and William Barton at the home of Levi’s cousin Kate Graham, where a large sum of money was recovered in his bags. Barton also said they had given money to Mary Farrington, the mother of Hillary and Levi, who was living on a farm outside Waverly, Tennessee, with a “young” brother, Peter.

Taking the prisoners to Union City, a pitched battle was fought between the officers and Farrington’s friends, led by a man named David Toler who was bent on his rescue. The rescuers were driven away after the Assistant City Marshal of Union City had been killed, a railroad watchman seriously wounded, and Mr. Pinkerton captured one of the band.

Toler was pursued and captured and a Vigilance Committee was formed that soon surrounded the authorities. Recognizing what might take place, the authorities succeeded in getting William Barton and William Taylor out of the hotel where they were confined but were unable to get the other prisoners away. The Vigilance Committee overpowered the local officers who were guarding them and shot and killed Levi Farrington and lynched Toler. 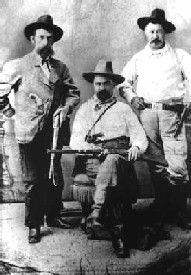 William Taylor, the last of the band, was arrested by Patrick Connell and William Pinkerton at Real Foot Lake, Tennessee.

In the meantime, William Pinkerton and Patrick Connell were escorting Hillary Farrington back to Tennessee on a steamboat. Near Cairo, Illinois Hillary broke loose and grabbed Pinkerton’s revolver. Struggling over the weapon in a death fight, the gun discharged, grazing Pinkerton’s skull and Hillary wrenched it free. However, before the train robber could aim, Pinkerton delivered an angry upper-cut that sent his foe spinning backward over the paddleboat, where he landed on the paddlewheel and was chopped to pieces.

Afterward, Taylor and Barton were taken to the Memphis, Tennessee jail. Later, they pleaded guilty to train robbery and were sentenced to five years’ confinement at hard labor in the penitentiary at Nashville, Tennessee.