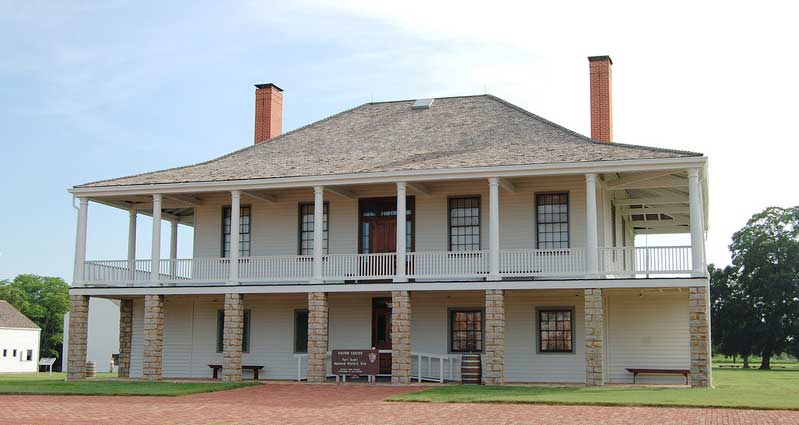 The old Fort Scott Hospital is now a Visitor’s Center by Kathy Weiser-Alexander.

Fort Scott, Kansas, initially called Camp Scott and named in honor of General Winfield Scott, was established on May 30, 1842, at the Marmaton River crossing of the Fort Leavenworth-Fort Gibson Military Road. It was among nine forts originally planned to line the area between the Great Lakes and New Orleans to separate proposed Indian lands and white settlements.

When the fort was established in 1842, the nation was still young and confined largely to the area east of the Mississippi River. Yet within a few years, Fort Scott’s soldiers became involved in events that would lead to tremendous spurts of growth and expansion. As the nation developed, tensions over slavery led to the conflict and turmoil of “Bleeding Kansas” and the Civil War.

As a young America grew, settlers hungry for land forced American Indians west of the Mississippi River. When they arrived in this area, tribes were guaranteed land where white settlement would be forbidden. Established in 1842, Fort Scott served as one of a line of forts from Minnesota to Louisiana that helped to enforce this promise of a “permanent Indian frontier.” Soldiers kept the peace between white settlers, native peoples like the Osage, and relocated Eastern tribes.

Positioned on a bluff overlooking the confluence of Mill Creek and the Marmaton River, Fort Scott filled a gap between Fort Leavenworth, Kansas to the north and Fort Gibson, Oklahoma 150 miles south. The fort was home to infantry soldiers and the dragoons, an elite unit of troops trained to fight both on horseback and on foot. The infantry performed many of the fatigue duties, including fort construction, while the dragoons went on numerous expeditions. 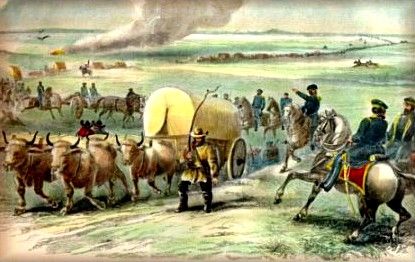 In the 1840s, settlers flocked westward to Oregon and California. When conflict arose along the Santa Fe and Oregon Trails dragoons were called on to keep the peace. Two expeditions rode escort on the Santa Fe Trail in 1843. The next year, dragoons from Scott and Leavenworth marched into Pawnee country to persuade that tribe to cease hostilities against the Sioux. In 1845, they patrolled the Oregon Trail as far west as South Pass, Wyoming parleying with Indian tribes as they went.

Both infantry and dragoons left Fort Scott to fight in the Mexican-American War (1846-48), which brought vast new lands into U.S. possession. Some Fort Scott dragoons marched with Stephen Kearney into New Mexico and California, while others served with Zachary Taylor at Buena Vista. Infantry soldiers from Fort Scott also fought with Taylor and participated in Winfield Scott’s overland march to Mexico City.

Westward expansion in the 1840s brought about a growth spurt that nearly doubled the country’s size and fulfilled “Manifest Destiny” – the idea that it was America’s divine right to stretch from coast to coast. As the frontier extended further westward, the idea of a “permanent” Indian territory died a quick death and the army abandoned Fort Scott in 1853. However, violent events in the region would soon bring soldiers back as the nation experienced growing pains over the issue of slavery.

Slavery divided the nation during its turbulent adolescent years. Conflict arose over whether to allow slavery in the new western territories. Under the Kansas-Nebraska Act (1854), Congress created Kansas and Nebraska Territories, opening these lands for settlement. It declared that the residents of these territories could decide by popular vote whether their state would be free or slave. In Kansas, people on both sides of this controversial issue flooded in, trying to influence the vote in their favor. 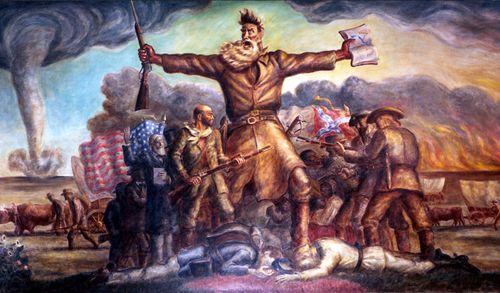 Three distinct political groups occupied Kansas-proslavers, free-staters, and abolitionists. Proslavery advocates, as the name implies, supported slavery, regardless of whether they personally owned slaves. Abolitionists wanted to rid the nation of “the peculiar institution”. Free staters didn’t particularly care about slavery where it already existed but were opposed to its extension westward. The conflict between these opposing factions soon turned violent. As a result, this era became forever known as “Bleeding Kansas,” an era when violence, destruction, and psychological warfare prevailed in the region.

Fort Scott and the surrounding area were not immune to the turmoil. Sold at auction in 1855, the buildings of the fort became the new town. The townspeople were primarily proslavery, while free-staters and abolitionists dominated the surrounding countryside. This division of opposing factions was illustrated on the grounds of the “old fort” by the existence of two hotels. One, a former officers’ quarters, became the Fort Scott Hotel, nicknamed the “Free State” Hotel, due to the political leanings of many of its guests. Directly across the square, an infantry barracks was now the Western Hotel, a headquarters for proslavery men. 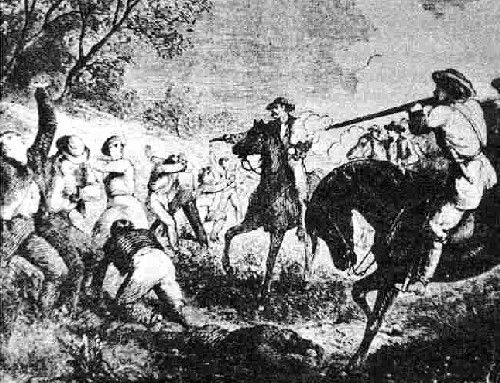 By 1858, radical elements from both factions converged on the area. James Montgomery, an ardent abolitionist, became a leader of free-state forces that invaded Fort Scott, a haven for Border Ruffians (extreme proslavery men). During one raid, Montgomery tried to burn the Western Hotel; another raid took the life of John Little, a former deputy marshal.

During this era, soldiers returned periodically to Fort Scott to restore law and order, staying each time until violence abated, only to have a conflict resume on their departure. By the time the strife waned in 1859, nearly 60 people had died and hundreds terrorized throughout Kansas Territory in the struggle over slavery. Anti-slavery forces finally prevailed. Kansas entered the Union as a free state on January 29, 1861, but by then, the fighting and violence once contained to Kansas threatened to engulf the entire country. 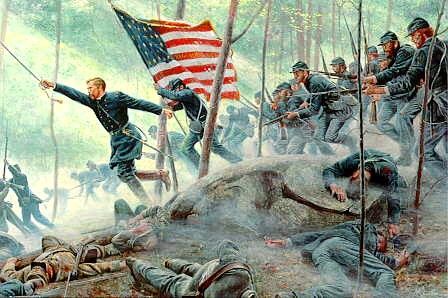 The struggles of an adolescent America became a full-fledged rebellion during the Civil War as the nation divided over the issues of slavery and self-determination. The war brought the U.S. Army back to Fort Scott. Union commanders viewed the town as a strategic point in southeast Kansas to establish a base of military operations, where the army could protect Kansas against a possible Confederate invasion. Troops reoccupied many of the old fort buildings, including the stables and hospital, and began construction on a variety of new buildings and over 40 miles of fortifications.

Fort Scott served as a major supply depot for Union armies in the West, a general hospital for soldiers in the region and a haven for people fleeing the war-displaced Indians, escaped slaves, and white farmers. Many of these refugees joined the Union Army, greatly diversifying its ranks. American Indian and African American regiments were recruited in the area, including the 1st Kansas Colored Infantry. Sworn in on the grounds of Fort Scott, this was the 1st African American regiment to engage the Confederates in combat.

Fort Scott’s military stores made it a target of Confederate General Sterling Price, who made two unsuccessful attempts to capture it during the war. Guerilla warfare, which plagued the region, also threatened the town. Intense fighting on the Kansas-Missouri border between the Jayhawkers and the Bushwhackers kept the military occupied. The Union presence likely spared Fort Scott from pillaging and destruction, a fate of other towns in the area.

After the Civil War ended, the nation began to heal and to unify. Railroads built across the continent played a major role in tying the country together. Town leaders of Fort Scott saw a railroad line as a means to build prosperity by tapping into the trade of Eastern markets. By 1869, their efforts succeeded as the first railroad reached the city. As workers laid tracks south of town, they came into conflict with squatters who forcefully opposed the railroad. The military returned and established the Post of Southeast Kansas (1869-73) to protect the railroad workers. This set the stage for a rare instance when U.S. troops took up arms against American citizens to protect the country’s business interests. 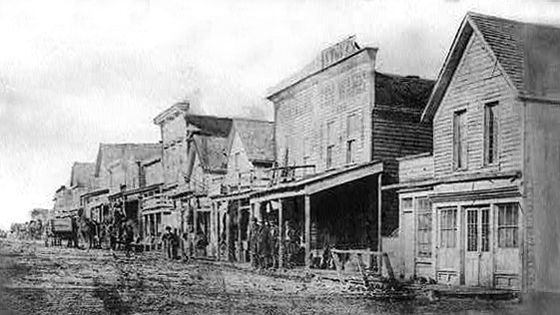 From 1842-73, Fort Scott evolved from an isolated frontier outpost into a bustling trade center and played a significant role in events that transformed the United States. During that time, America grew from a young divided republic through the growing pains of conflict and war into maturity as a united and powerful transcontinental nation.

Today, the city of Fort Scott is the only major town still existing in Kansas that developed from a U.S. Army fort established before Kansas became a territory and a state.

The fort itself is today restored and preserved as a National Historic site. The historic site is located in downtown Fort Scott ate the intersection of U.S. Highways 69 and 54. 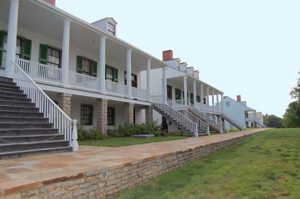 Fort Grounds – There have been several sightings of ghost-like Civil War soldiers looming on the lawn and around the courtyard. Officers have also been seen in the cell blocks and stables.

On one occasion a visitor to the fort made a comment to one of the staff about a nice conversation he had with a gentleman dressed in period costume. However, the staff person was somewhat confused as no one on staff was scheduled to be dressed in a costume that particular day. Inquiring at the office, this was confirmed. It appears that the Fort Scott tourist had the “pleasure” of meeting one of Fort’s many ghosts.

Officers Quarters – The Officer’s Quarters are said to be the most haunted. Long ago an officer accidentally shot himself when riding up to the building on the left. He had been showing off for his wife. The devastated woman held him in her arms as he died in front of the building. According to our reader Carol, she has felt the presence of the long-dead woman in the quarters on many occasions.

The building on the left once served as the Free State Hotel. However, when the fort was permanently closed, both buildings served as an orphanage home called Goodlander’s for many years. According to staff and guests, the sound of these long-ago orphan children are often heard playing in the two buildings.

Several sightings of fog-like apparitions have been reported sifting from the chimney in the officer’s quarters. It is said that at midnight every night a ghostly figure can be seen looking out of the window of the officer’s building formerly known as the Free State Hotel.