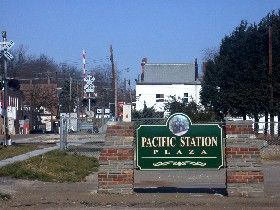 In 1852 the Pacific Railroad Company laid out an official town and called it Franklin. It was to be the new railroad’s first division west of the Mississippi River. On July 19, 1852, the first train made its inaugural run from St. Louis to the end of the track at Franklin amidst a huge celebration. Soon people began to settle the area due to its proximity to two major rivers and the city of St. Louis. In 1859 the town was officially incorporated and its name was changed in honor of the Pacific Railroad.

Most of the town’s early growth and development was due to the railroad. Soon buildings began to be built in the downtown area, some of which still stand today.

In 1864, during the Civil War, the town was raided by General Sterling Price of the Confederate Army. After the attack, the bridges, depot, ice house, and railroad supply houses were left in ashes.

In the 1870s, in the sandstone bluffs just north of downtown Pacific, silica mining began, giving a boost to the economy of the small town. In those days, silica sand was used to make fine glassware. Today, you can still see large caverns in the bluff along the north side of Route 66. Mining continues in the area at the St. Peter Sandstone Formation south of Route 66 across the Meramec River.

Another milestone came to Pacific when U.S. 66 was built in 1932. In no time, the city soon sprouted a number of businesses to cater to the new traffic through the town. 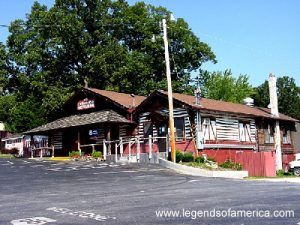 One of the first was the Red Cedar Inn, which continues to stand today. The Inn was built by James and Bill Smith in 1934. Logs were cut from the family farm and hauled to the site on an old one-ton Ford Truck. In 1935, the barroom was added. The Inn was operated continually until 1972 when James Smith II retired. However, in 1987, the Inn was reopened by James Smith III and continued to serve Route 66 travelers in the family tradition. On April 2, 2003, the Inn was placed on the National Register of Historic Places. Alas, the inn was closed in 2005. In 2017, the City of Pacific purchased this building and intends to develop it as a new Welcome Center/Museum.

About a mile on down the road, at 409 E. Osage Street and old building which once held Monroe’s Diner. Monroe’s served up many a breakfast, lunch and dinner to Mother Road travelers and was closed for a while. Today, the building stands empty. 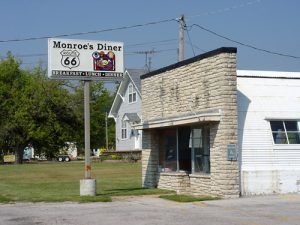 Towering sandstone bluffs line Route 66 through Pacific, dotted with caves, making many a Mother Road traveler make a double-take. The caves are from Pacific’s silica mining days, dating back to the 1870s. They were exposed in 1932 when Route 66 was realigned through Pacific, bypassing the Manchester Road alignment.

Today, Pacific, just a 30-minute drive from St. Louis, is primarily populated by a commuter society wishing to enjoy the advantages of small-town life.