When the American Revolution was over, the new United States not only had to deal with how to govern itself but also how to deal with Native Americans as the nation pushed westward. During this time, there were many decisions that were made that dealt with policies to keep the peace between white settlers and the Native Americans as well as dealing with other issues such as the practice of slavery and social reforms. 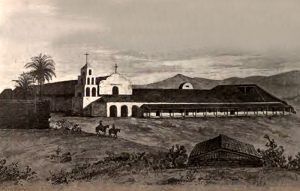 1775 – Forced to labor in the mission fields and to worship according to the missionaries’ teachings, the Indians at San Diego, California rebelled against the Spanish, burning every building and killing most of the inhabitants, including the mission’s head priest. Thanks to a Spanish sharpshooter, the Indians were finally driven off and the Spanish retained control of their outpost.

1776 – On May 25, 1776, the Continental Congress resolved that it was “highly expedient to engage Indians in service of the United Colonies,” and authorized recruiting 2,000 paid auxiliaries. The program was a dismal failure, as virtually every tribe refused to fight for the colonists. 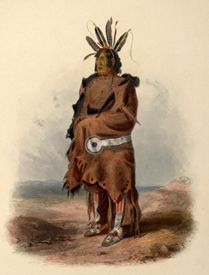 1776-1794 – Chickamauga Wars – A series of conflicts that were a continuation of the Cherokee struggle against white encroachment. Led by Dragging Canoe, who was called the Chickamauga by colonials, the Cherokee fought white settlers in Tennessee, Kentucky, Virginia, North Carolina, South Carolina, and Georgia.

1781 – Smallpox wiped out more than half the Piegan Blackfoot.

1782 – On March 8, 1782, Captain David Williamson and about 90 volunteer militiamen slaughtered 62 adults and 34 children of the neutral, pacifist, and Christian Delaware people at Gnadenhutten, Ohio in retaliation for raids by other Indian tribes.

April 21, 1782 – The Presidio, overlooking San Francisco, was erected by the Spanish to subdue Indians interfering with mail transmissions along El Camino Real.

1785-1795 – Old Northwest War – Fighting occurred in Ohio and Indiana. Following two humiliating defeats at the hands of native warriors, the Americans won a decisive victory under “Mad Anthony” Wayne at the Battle of Fallen Timbers. 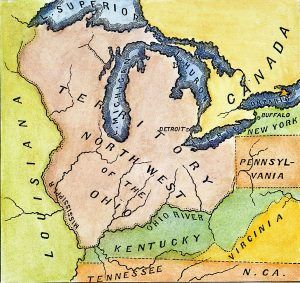 July 13, 1786 – The Northwest Ordinance was enacted, stating “the utmost good faith shall always be observed toward the Indians… in their property, rights, and liberty they shall never be disturbed.”

1789 – The Indian Commerce Clause of the Constitution is added stating “The Congress shall have Power… to regulate Commerce with foreign Nations, and among the several States, and with the Indian tribes.” This clause is generally seen as the principal basis for the federal government’s broad power over Indians.

Indian agents, who were appointed as the federal government’s liaison with tribes, fell under the jurisdiction of the War Department. The Indian agents were empowered to negotiate treaties with the tribes.

1790 – The Indian Trade and Intercourse Act is passed, placing nearly all interaction between Indians and non-Indians under federal, rather than state control, established the boundaries of Indian country, protected Indian lands against non-Indian aggression, subjected trading with Indians to federal regulation, and stipulated that injuries against Indians by non-Indians was a federal crime. The conduct of Indians among themselves, while in Indian country, was left entirely to the tribes.

A military battle occurred between the US Army and Shawnee. The army, some 1,500 strong, invaded Shawnee territory, in what is now western Ohio. The Americans were defeated in 1791 after suffering 900 casualties, 600 of whom died.

March 1, 1790 – The first U.S. Census count included slaves and free African-Americans, but Indians were not included.

1792 – On November 6, George Washington, in his fourth annual address to Congress, expressed dissatisfaction that “Indian hostilities” had not stopped in the young country’s frontier, north of the Ohio River.

1795 – The Treaty of Greenville marked the end of an undeclared and multi-tribal war begun in the late 1770s and led by the Shawnee who fought to resist American expansion into Ohio. In 1795, over a thousand Indian delegates ceded two-thirds of present-day Ohio, part of Indiana, and the sites where the modern cities of Detroit, Toledo, and Chicago are currently situated. The Indians, in return, were promised a permanent boundary between their lands and American territory.

1802 – Federal law prohibits the sale of liquor to Indians.

1803 – The Louisiana Purchase adds to the United States French territory from the Gulf of Mexico to the Northwest.

1804 to 1806 – Lewis and Clark expedition with Sacagawea. Under the direction of President Thomas Jefferson, Lewis and Clark charted the western territory with the help of Sacagawea, a Shoshone Indian.

1804 – The Sioux meet the Lewis and Clark Expedition.

Trading posts begin to be established in the west.

Oglala and other Lakota tribes expand their region of influence and control to cover most of the current regions known as North and South Dakota, westward to the Big Horn Mountains in Wyoming and south to the Platte River in Nebraska.

On March 26, 1804 the U.S. government gave first official notice to Indians to move west of the Mississippi River.

1808 – The Osage, a Sioux, sign the Osage Treaty ceding their lands in what is now Missouri and Arkansas to the U. S.

1808 to 1812 – Tecumseh, Chief of the Shawnee, and his brother, known as The Prophet, founded Prophetstown for the settlement of other Indian peoples who believed that signing treaties with the US government would culminate in the loss of the Indian way of life. Tecumseh also organized a defensive confederacy of Indian tribes of the Northwestern frontier who shared the common goal of making the Ohio River the permanent boundary between the United States and Indian land.

1809 – On February 8, Russians who built a blockhouse on the Hoh River (Olympic Penninsula, Washington) were taken captive by Hoh Indians and were held as slaves for two years.

On February 8, 1809, Russians who built a blockhouse on the Hoh River (Olympic Penninsula, Washington) were taken captive by Hoh Indians and were held as slaves for two years.

1810 – The Treaty of Fort Wayne brought the Delaware, Potawatomi, Miami, and Eel River Miami nations together to cede three million acres of their land along the Wabash River to the United States.

Nicholas Biddle of the Lewis and Clark expedition noted that among the Minitaree Indians the effeminate boys were raised as females. Upon reaching puberty, the boys were then married to older men. The French called them Birdashes.

1811 – On August 31, Fort Okanogan was established at the confluence of the Columbia and Okanogan Rivers; Indians met the Astorians with pledges of friendship and gifts of beaver.

On November 7, 1811, Shawnee leader Tecumseh’s dream of a pan-Indian confederation was squashed when his brother Tenskwatawa led an attack against Indiana Territory militia forces in the Battle of Tippecanoe. Tenskwatawa was defeated.

1813 to 1814 – The Creek War was instigated by General Andrew Jackson who sought to end Creek resistance to ceding their land to the US government. The Creek Nation was defeated and at the Treaty of Fort Jackson and lost 14 million acres or two-thirds of their tribal lands.

1815 – Blacks and Creek Indians captured Fort Blount, Florida from Seminole and used it as a haven for escaped slaves and as a base for attacks on slave owners. An American army detachment eventually recaptured the fort.

1820 – By this year, more than 20,000 Indians lived in virtual slavery in the California missions.

1821 – South Carolina settlers and their Cherokee allies attack and defeat the Yamassee.

The U.S. government began moving what it called the “Five Civilized Tribes” of southeast America (Cherokee, Creek, Seminole, Choctaw, and Chickasaw) to lands west of the Mississippi River.

1823 – Johnson v. McIntosh Supreme Court decision – This case involved the validity of land sold by tribal chiefs to private persons in 1773 and 1775. The Court held that that Indian tribes had no power to grant lands to anyone other than the federal government.

1824 – The Indian Office federal agency was established by the Secretary of War and operated under the administration of the War Department. The Office becomes the Bureau of Indian Affairs (BIA) in 1849.

1825 – Creek Chief William McIntosh signs treaty ceding Creek lands to the U.S. and agrees to vacate by 1826; other Creek repudiate the treaty and kill him. 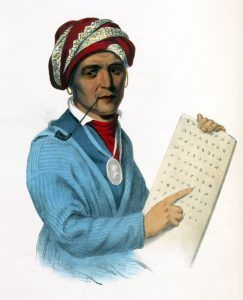 1829 – Creek Indians receive orders to relocate across the Mississippi River.

1830 – On April 7, President Andrew Jackson submitted a bill to Congress calling for the removal of tribes in the east to lands west of the Mississippi. On May 28th, the Indian Removal Act was passed, and from 1830 to 1840 thousands of Native Americans were forcibly removed.

On September 15, 1830, the Choctaw sign a treaty exchanging 8 million acres of land east of the Mississippi for land in Oklahoma.

On December 22, 1830, the State of Georgia made it unlawful for Cherokee to meet in council unless it is for the purpose of giving land to whites.

1831 – Black Hawk of the Sac and Fox tribes agrees to move west of Mississippi River.

Cherokee Nation v. Georgia – The Cherokee Nation sued the State of Georgia for passing laws and enacting policies that not only limited their sovereignty, but which were forbidden in the Constitution. The Court’s decision proclaimed that Indians were neither US citizens, nor independent nations, but rather were “domestic dependent nations.”

On December 25, 1831, a force of Black Seminole Indians defeated U.S. troops at Okeechobee during the Second Seminole War.

1833 – On January 12, a law was passed making it unlawful for any Indian to remain within the boundaries of the state of Florida.

1834 – The Indian Intercourse Act was passed and Congress created Indian Territory in the west that included the land area in all of present-day Kansas, most of Oklahoma, and parts of what later became Nebraska, Colorado, and Wyoming.

1835 – Treaty of New Echota – A portion of the Cherokee nation agreed to give up Cherokee lands in the Southeast in exchange for land in and removal to Indian Territory. A larger group of the Cherokee did not accept the terms of this treaty and refused to move westward.

1835-42 – The Second Seminole War is the most terrible of three wars between the US government and the Seminole people and was also one of the longest and most expensive wars in which the US army was ever engaged.

1836 – In five groups, over 14,000 Creek Indians were forcibly removed by the US Army from Alabama to Oklahoma.

1838 – Trail of Tears – Despite the Supreme Court’s rulings in 1831 and 1832 that the Cherokee had a right to stay on their lands, President Jackson sent federal troops to forcibly remove almost 16,000 Cherokee who had refused to move westward. In May, American soldiers herded most into camps where they remained imprisoned throughout the summer and where at least 1,500 perished. The remainder began an 800-mile forced march to Oklahoma that fall. In all some, 4,000 Cherokee died during the removal process.

On January 30, 1838, Seminole leader Osceola died from complications of malaria at Fort Moultrie, South Carolina. He led a valiant fight against the removal of his people to Indian Territory, but eventually, the Seminole were forcibly relocated.

1841 – Forty-eight wagons arrive in Sacramento, California by way of the Oregon Trail, one of the earliest large groups to make this journey.

1849 – The U.S. Government purchases Fort Laramie, Wyoming from the American Fur Company and begins to bring in troops.

The Bureau of Indian Affairs s transferred from the War Department to the newly-created Department of the Interior.

Physician services were extended to Indians with the establishment of a corps of civilian field employees.

The Earth is the mother of all people, and all people should have equal rights upon it.