The Presidio of San Francisco, California is the oldest Army installation operating in the American West and one of the longest-garrisoned posts in the country. Three flags have flown over this former military post strategically located near the Golden Gate Bridge. 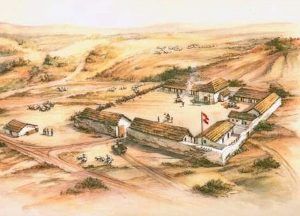 Established by Spain on March 28, 1776, the Presidio of San Francisco became a Mexican outpost in 1822 and remained under Mexican rule for 24 years before the U.S. Army took control of it in 1846. In 1847, during the Mexican-American War, the New York Volunteers occupied the Presidio’s adobes inaugurating 147 years of growth as a major U.S. Army post.

During the 1850s-60s Presidio soldiers fought Indians in California, Oregon, Washington and Nevada.

To protect the Bay entrance the Army Corps of Engineers built Fort Point, a four-tiered brick and granite fort designed to hold 126 large cannons. The outbreak of the Civil War in 1861 emphasized the importance of a rich California and the military significance of  San Francisco harbor to the Union.

This led, in 1862, to the first major program of construction and expansion at the Presidio since it was acquired by the United States. The Indian Wars of the 1870s and 1880s resulted in additional growth of the Presidio. Soldiers stationed here saw action against the Modoc Indians in the Lava Beds of northern California and against the Apache Indians in the southwest. By the 1890s the Presidio was no longer a frontier outpost but a major military installation and a base for American expansion into the Pacific. 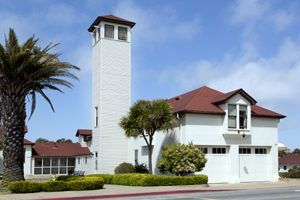 The Presidio of San Francisco by Carol Highsmith

In 1890, with the creation of Sequoia, General Grant, and Yosemite National Parks in the Sierra Nevada mountains of California, the protection of these scenic and natural resources was assigned to the U.S. Cavalry stationed at the Presidio. Soldiers patrolled these new parks during the summer months until the start of World War I in 1914 and two years later the National Park Service was created to manage the country’s National Parks.

The United States’ war with Spain, in 1898, and the subsequent Philippine-American War, from 1899 to 1902, increased the role of the Presidio. Thousands of troops camped in tent cities awaiting shipment to the Philippines including all four African-American regiments known as the “Buffalo Soldiers.” Returning sick and wounded soldiers were treated in the Army’s first permanent general hospital, Presidio (later Letterman) Army General Hospital. By 1905, twelve coastal defense batteries of reinforced concrete were built along the San Francisco Headlands. Presidio coast artillery units were stationed near the Bay entrance at Fort Scott, with cavalry and infantry garrisoned at the main post. During the following the 1906 earthquake and fire, the US Army at the Presidio assisted the civilian government by providing food, clothing, shelter, and protection. In 1914 troops under the command of General John Pershing left the Presidio for the Mexican border to pursue Pancho Villa and his men. When World War I began General Pershing became the Commander of the American Expeditionary Forces in Europe. The Presidio expanded in the 1920s when Crissy Army Airfield was established to assist in harbor defense. In 1924 the first “dawn to dusk” transcontinental flight finished here. From 1933 to 1937 the Golden Gate Bridge was built, which increased public use of the Presidio. The airfield moved north to Marin County, to become Hamilton Airfield. 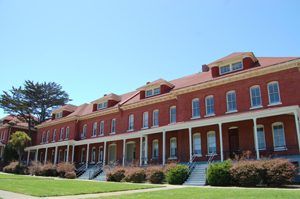 A building at the San Francisco Presidio by Kathy Weiser-Alexander.

The United States entered World War II after the attack on Pearl Harbor, and Presidio soldiers dug foxholes along the nearby beaches. Fourth Army Commander General John L. DeWitt conducted the internment of thousands of Japanese and Japanese-Americans on the west coast while U. S. soldiers of Japanese descent were trained to read and speak Japanese at the first Military Intelligence Service language school at Crissy Field.

The Presidio also became headquarters for the Western Defense Command for the west coast and Alaska, and the nearby Fort Mason Port of Embarkation shipped 1,750,000 men to fight in the Pacific. As it became the largest debarkation hospital in the country, Letterman Hospital peaked at 72,000 patients in one year. In the 1950s the Presidio served as the headquarters for Nike missile defense located around the Golden Gate, and headquarters for the famed Sixth U.S. Army.

The Presidio of San Francisco was designated a National Historic Landmark in 1962, with over 350 buildings having historic value. 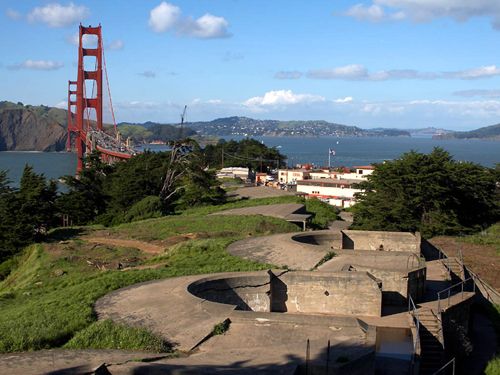 In 1989, the army decided to close the Presidio and it was transferred to the National Park Service in October 1994 and became part of the Golden Gate National Recreation Area.

In 1998 the Presidio Trust took over management of most of the Presidio’s buildings and grounds. Today, it is the only monetarily self-sustaining national park site in the country.

The Presidio features 768 historic buildings and structures including massive coastal batteries, vast miles of beaches and bluffs, Army-planted forests, and hiking and biking trails on its nearly 1500 acres. It is one of the largest and most innovative preservation projects in the Nation. 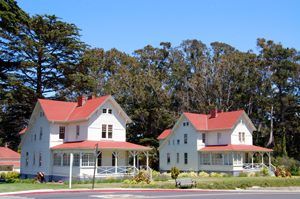 Buildings at the Presidio of San Francisco, California by Kathy Weiser-Alexander.

Forts Across the Nation