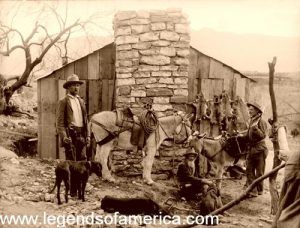 As early as the first decade of the present century, the great fur companies sent out expeditions up the valley of the Platte in the charge of their agents, to trap the beaver and other animals valuable for their beautiful skins. The hardships of these pioneers in the beginning of a trade which, in a short time assumed gigantic proportions, are a story of suffering and privation which has few parallels in the history of the development of our mid-continent region. Until the establishment of the several trading posts, the lives of these men were continuous struggles for existence, as no company could possibly transport provisions sufficient to last beyond the most remote settlements, and the men were compelled to depend entirely upon their rifles for a supply of food.

When posts were located at convenient distances from each other in the desolate country where their vocation was carried on, the chances of the trapper for regular meals every day were materially enhanced.

Before the establishment of these rendezvous, where everything necessary for his comfort was kept, and the trapper subsisted on deer, bear-meat, buffalo, and wild turkeys — the latter were found in abundance everywhere. In times of great scarcity, he was frequently compelled to resort to dead horses. His coffee, and perhaps a scant supply of flour, which he had brought from the last settlement, would rarely suffice until he reached the foot of the mountains; and even when obtainable, the price was so exorbitant that but few of the early adventurers could indulge in such luxuries.

The first trading-post was established at the mouth of Clear Creek, Colorado in 1832, by Louis Vasquez, and named Fort Vasquez, after its proprietor, but never grew into much importance and was soon abandoned.

Fort Laramie, Wyoming one of the most celebrated rendezvous of the trappers, was erected in 1834, by William Sublette and Robert Campbell of St. Louis, agents of the American Fur Company. It was first called Fort William, in honor of Sublette; later Fort John, and finally christened Fort Laramie, after the river which took its name from Joseph Laramie, a French-Canadian trapper of the earliest fur-hunting period, who was murdered by the Indians near the mouth of the river. It was located in the immediate region of the Ogallala and Brule bands of the great Sioux nation, and not very remote from that of the Cheyenne and Arapaho.

In 1835 the fort was sold to Milton Sublette, Jim Bridger, and others of the American Fur Company, and the year following was by them rebuilt at a cost of ten thousand dollars. It remained a private establishment until 1849, the year of the discovery of gold in California, when the government bought and transformed it into a military post, to awe the savages who infested the trail to the Pacific, which had then become the great highway of the immense exodus from the Eastern states to the gold regions of that coast.

The original structure was built in the usual style of all Indian trading-stations of that day, of adobes, or sun-dried bricks. It was enclosed by walls twenty feet high and four feet thick, encompassing an area 250 feet long by 200 wide. At the diagonal northwest and southwest corners, adobe bastions were erected, commanding every approach to the place.

The number of buildings was twelve in all: there were five sleeping-rooms, kitchen, warehouse, icehouse, meat-house, blacksmith shop, and carpenter shop. The enclosed corral had a capacity for two hundred animals. The corral was separated from the buildings by a partition, and the area in which the buildings were located was a square, while the corral was a rectangle, into which, at night, the horses and mules were secured. In the daytime, too, when the presence of Indians indicated danger of the animals being stolen, they were run into the enclosure.

The roofs of the buildings within the square were close against the walls of the fort, and in case of necessity could be utilized as a banquette from which to repulse any Indian attacks. 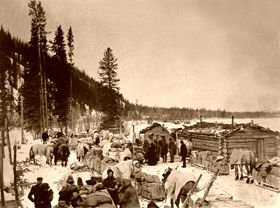 The main entrance to the enclosure had two gates, with an arched passage intervening. A small window opened from an adjoining room into this passage, so that when the gates were closed and barred anyone who might still hold communication, through this narrow aperture, with those within. Suspicious characters, especially the Indians, could do their trading without the necessity of being admitted into the fort proper. At times when danger was apprehended from an attack by the Indians, the gates were kept shut and all business transacted through the window.

About thirty men were usually employed at Fort Laramie when the trade was at its height, as that station monopolized nearly the entire Indian trade of the whole region tributary to it. There the famous frontiersmen, Kit Carson, Jim Bridger, Jim Baker, Jim Beckwourth, and others, who in those remote times constituted the pioneers of the primitive civilization of the country, made their headquarters.

The officials of the fur companies stationed at Fort Laramie ruled with absolute authority. They were as potent in their sway as the veriest despot, for they had no one to dispute their right to lord it overall. The nearest army outposts were seven hundred miles to the east, and, like the viceroys of Spain after the conquest of Mexico, they were a law unto themselves. 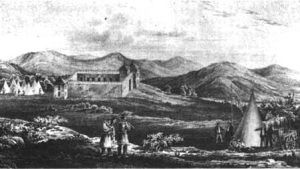 In its palmy days Fort Laramie swarmed with women and children, whose language, like their complexions, was much mixed. All lived almost exclusively on buffalo meat dried in the sun, and their hunters had to go sometimes fifty miles to find a herd of buffalo. After a while there were a few domestic cattle introduced, and the conditions changed somewhat.

No military frontier post in the United States was as beautifully located as Fort Laramie. Surrounded by big bluffs at the intersection of the Laramie and Platte rivers, forming a valley unsurpassed in the fertility of its soil, together with the richness of its natural vegetation, it was an oasis in the desert. The glory of the once charming place has departed forever. It was abandoned by the government a few years ago, as it was no longer a military necessity, the Indian tribes which it watched having either become tame or removed to far-off reservations.

In 1826 Jim Bridger joined General Ashley’s trapping expedition, and eleven years afterward, in 1837, built Fort Bridger, for a long time one of the most famous of the trading posts. It was located on the Black Fork of Green River where that stream branched into three principal channels, forming several large islands, upon one of which the fort was erected. It was constructed of two adjoining log houses, with sod roofs, enclosed by a fence of pickets eight feet high, and, as was usual, the offices and sleeping-apartments opened into a square, protected from attacks by the Indians by a massive timber gate. Into the corral, all the animals were driven at night to guard them against being stolen, or devoured by wild beasts. The fort was inhabited by about fifty whites, Indians, and half-breeds. The fort was the joint property of Bridger and Vasquez. Upon the Mormon occupation of the region, the owners were obliged to abandon it, on account of disagreements with that sect, in 1853.