The American Fur Company was founded by John Jacob Astor in 1808 and would become one of the largest businesses in the country at the start of the 19th century. Astor began this ambitious venture to compete with Canada’s two great fur-trading companies – the Hudson’s Bay Company and the North West Company.

Initially, Astor’s operation in the Columbia River Valley of Oregon was under a subsidiary called the Pacific Fur Company. His Great Lakes efforts were under another subsidiary — the South West Company. However, the War of 1812 destroyed both companies. Five years later, in 1817, Congress passed an act that excluded foreign traders from U.S. territory, making the American Fur Company the biggest in the Great Lakes region.

In 1821, the company partnered with the Chouteau interests of St. Louis, Missouri, giving the company a monopoly in the Missouri River region and, later, in the Rocky Mountains. Growing larger each year, the American Fur Company made a practice of buying out small businesses or putting them out of business with stiff competition, virtually having a market on the entire fur trade by 1830. Astor withdrew in 1834, and the company split up into smaller organizations.

Many trading posts were closed to save expenses, and heavy competition began to resurface. Shortly after that, the demand for furs began to decrease dramatically. Despite efforts to increase profits by diversifying into other industries like lead mining, the American Fur Company folded in 1842. The company’s remaining assets were split into several smaller operations, most of which failed by the 1850s. 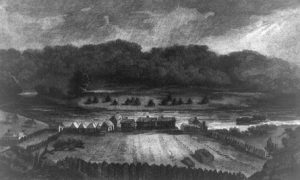