“The next best thing to being clever is being able to quote someone  who is.”

“For my handling of the situation at Tombstone, I have no regrets. Were it to be done again, I would do it exactly as I did it at the time.”  —Wyatt Earp, lawman

“We are rough men and used to rough ways.”  – Bob Younger to a newspaper reporter following the 1876 Northfield, Minnesota raid.

“Cimarron is in the hands of a mob.”  — The Santa Fe New Mexican newspaper commenting on Cimarron, New Mexico during the Colfax County War. November 9, 1875

“The adulation’s heaped on him by a grateful nation for his supposed genius turned his head, which, added to his natural disposition, caused him to bloat his little carcass with debauchery and dissipation which carried him off prematurely.”  — General George Crook delivered this unusual obituary in memory of General Philip Sheridan, who was disliked by many Army officers of the West

“Wild Bill was a strange character, add to this figure a costume blending the immaculate neatness of the dandy with the extravagant taste and style of a frontiersman, you have Wild Bill, the most famous scout on the Plains.”  – General George Custer, writing about Wild Bill Hickok.

“A jail is just like a nutshell with a worm in it, the worm will always get out.”  — John Dillinger several weeks before he bluffed his way out of the Lake County Jail in Crown Point, Indiana.

“There is no law, no restraint in this seething cauldron of vice and depravity.” – The New York Tribune describing Abilene, Kansas.

“Never run a bluff with a six-gun.” – Bat Masterson

“You may hear of a killing if everything works right…but it may be some time yet.” — Texas Ranger Ira Aten to Capt. L. P. Sieker in 1888.

“Nothing to fear. Any coward shooting from night ambush will be too nervous to hit me.” – Elijah S. Briant, Sutton County, Texas, when he was warned he might be shot.

“He is universally despised by all the officers of his regiment excepting his relatives and one or two sycophants.” – a member of General George Armstrong Custer’s command.

“Can’t you hurry this up a bit? I hear they eat dinner in Hades at twelve sharp and I don’t aim to be late.” – Black Jack Ketchum, just before he was hanged at Clayton, New Mexico on April 26, 1901.

“They say I killed six or seven men for snoring. It ain’t true. I only killed one man for snoring.” — John Wesley Hardin.

“Where the Indian killed one buffalo, the hide and tongue hunters killed fifty.” — Chief Red Cloud

“I love it. It is wild with adventure.”  – Henry Starr describing the bandit life in the Old West shortly before he was shot to death in a gunfight in Arkansas.

“Dodge City is a wicked little town. Indeed, its character is so clearly and egregiously bad that one might conclude, were the evidence in these later times positive of its possibility, that it was marked for special Providential punishment.”  — a letter that appeared in the Washington D.C. Evening Star, January 1, 1878.

“But you won’t be here to see any of ’em; not by a damn sight, because it’s the order of this court that you be took to the nearest tree and hanged by the neck til you’re dead, dead, dead, you olive-colored son of a billy goat.” — Judge Roy Bean

Comedian Will Rogers was once asked if his ancestors came over on the Mayflower. “No,” he replied. “But my relatives were here to meet them.” 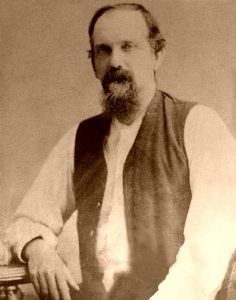 “I have at all times tried to use my influence toward protecting the property holders and substantial men of the country from thieves, outlaws and murderers, among whom I do not care to be classed.” — Clay Allison, in response to a Missouri newspaper which reported him with fifteen killings under his belt.

“Carpenter, you have spilled the whiskey!” – Mike Fink, after he killed a friend named Carpenter while attempting to shoot a tin cup of whiskey off the man’s head.

“The Seventh can handle anything it meets.” – General George A. Custer while declining reinforcements for the Battle of the Little Big Horn.

“They saw me, those reckless seekers of beauty, and in a night I was famous.” — Lillie Langtry

“The only good Indian is a dead Indian.” — General Philip Sheridan

”I’m not afraid to die like a man fighting, but I would not like to be killed like a dog unarmed.” – Billy the Kid in a letter to Governor Lew Wallace, March 1879.

In 1883, Sitting Bull was a guest of honor at the opening ceremonies for the Northern Pacific Railroad. When it was his turn to speak, he said in the Lakota language, “I hate all white people. You are thieves and liars. You have taken away our land and made us outcasts.” A quick-thinking interpreter told the crowd the chief was happy to be there and that he looked forward to peace and prosperity with the white people. Sitting Bull received a standing ovation.