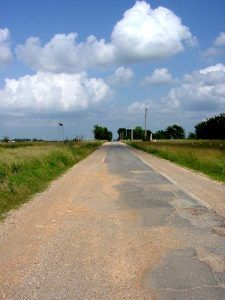 Though all of the eight states along historic Route 66 display pride in ownership of their piece of the pavement, Oklahoma seems to do it the best. Perhaps that is as it should be, given that the Mother Road was born in Oklahoma when Cyrus Avery of Tulsa conceived of the idea to link Chicago all the way to Los Angeles. Moreover, Oklahoma has more miles of the original highway than any other state; they were the first to install historic markers along the old route, the first to have a state-sponsored Route 66 museum, and ironically, the first to lose part of the original road when I-44 barreled through, dealing a deathblow to many service businesses between Tulsa and Oklahoma City.

In addition to the many signs promoting the Mother Road, you will see dozens of billboards proudly portraying the Native American heritage of the state. Just a little more than a century ago, the state was the last haven for numerous Indian tribes, before this land, too, was taken from them during the 1890s Oklahoma land rush.

It is those Oklahoma people that we see so vividly in our minds when we think of early Route 66. From Oklahoma, fled most of the 200,000 people escaping the towering black clouds of the dust bowl. Headed west in overheated old trucks topped with tattered mattresses, they migrated along the Mother Road to California, seeking to make a better life.

Oklahoma is also home to the National Highway 66 Association, which is responsible for promoting the Mother Road across all eight states, and the International Route 66 festival is held each June annually in Tulsa. 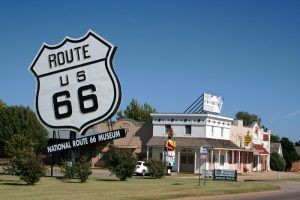 This road, which evolved from the early wagon trails of the 1800s, cuts a diagonal path through the rolling hills of northeast Oklahoma to the state’s center before heading westward to the Texas Line. Along the way, the Mother Road provides an abundance of vintage buildings, roadside attractions, and friendly people who are more than ready to share their experiences of the old Mother Road.

Though Route 66 is closely aligned with I-44 and I-40 across the state, you can travel almost the entire path on the vintage highway, jogging over and under the interstates. From the Kansas State Line all the way to El Reno, most of old Route 66 is designated as a state highway.

As you begin your journey, you will first come to the small town of Quapaw that displays several nice murals on its buildings and is home to the Spooklight, a dancing ball of light seen on a bluff called Devil’s Promenade. Then continue through man-made mountains of chat, leftover from the profitable lead and zinc mining era, to nearby Commerce, the home town of Mickey Mantle.

Soon you will come upon Miami, the first town established in Indian Territory, where you will see the beautiful Coleman Theatre built in 1929.  Just outside of Miami is the last section of the original nine-foot wide “Ribbon Road” listed as an Oklahoma National Historic Landmark.  This remarkable piece of vintage pavement zigzags for 13 miles between Miami and Afton. 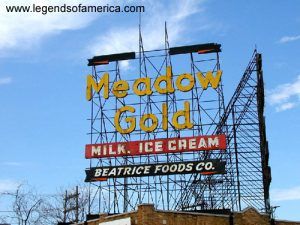 This picture of the Meadow Gold Sign in Tulsa, Oklahoma, taken on June 13, 2004, just three days before it was taken down. It was later moved down the street and is part of a city park. Photo by David Alexander.

When you reach Afton, this small town provides a vintage peek at what Route 66 must have been like long ago when you spy the remains of Rest Haven Motel and the restored Afton Station. In Vinita, satisfy your hunger at Clanton’s Café, operated by four generations of the same family. Vinita starts you on a trail through several small towns, including White Oak, Chelsea, and Foyil, where a wonderful side trip presents itself to Ed Galloway’s Totem Pole Park, just four miles east of town. Here you can see the world’s largest concrete totem pole, built over an eleven year period from 1937 to 1948, along with a wide array of other folk art sculptures.

Continue through Claremore, the hometown of Will Rogers, on your way to Catoosa, where the old Blue Whale attraction is a must-see. Once a stand-alone town outside of Tulsa, Catoosa is now but a suburb of the quickly growing “Tulsey Town.” Tulsa provides many views of the old Mother Road with vintage motels dotting 10th and 11th streets and art deco buildings downtown.

Beyond Tulsa, Route 66 provides another stretch of small towns, including Sapulpa, home of the original Rock Creek Bridge, Kellyville, and Bristow, where you can chow down on a delicious pork rib dinner plate at Russ’ Ribs. 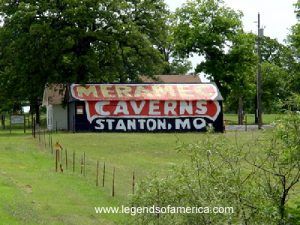 Nearby, Depew will present a view of several vintage buildings in its tiny downtown district before entering Stroud, the home of an old Route 66 icon, the Rock Café. Soon you will pass through Davenport before rolling into Chandler, the town of the last old-west gunfight that took the life of lawman Bill Tilghman. You can also see the old Lincoln Motel, established in 1939, and a restored Phillips 66 cottage style station. West of town is an old Meramec Caverns barn, the last one remaining on Oklahoma’s Mother Road.

The small towns of Warwick, Wellston, and Luther provide several vintage peeks at old stations and tourist camps before entering Arcadia, the city of the Round Barn. Built in 1898, the Arcadia Round Barn is the most photographed sight on the Mother Road.

At Edmond begins the suburbs of Oklahoma City. The Mother Road passes right by Oklahoma’s capital building, where oil rigs stood not so very long ago. As you begin to head out of the city, several old motels and restaurants begin to pop up. In the suburb of Warr Acres, an absolute “must-see” is Ann’s Chicken Fry House, featuring all manner of Route 66 memorabilia and fronted by a classic 1950s police car, a pink Cadillac, and vintage gas pumps. 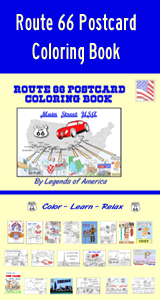 Nearby Hydro is home to Lucille Hamons Station, built in 1927. Lucille was called the Mother of the Mother Road when she ran the station and store for 59 years right up until the day she died.

Soon you will pass through Weatherford on your way to Clinton, where the first state-operated Route 66 Museum resides. It was also here that Elvis Presley once stayed at the Trade Winds Courtyard Inn.

Next, the ghost town of Foss presents itself before heading west through Canute on your way to Elk City, which provides another great Route 66 Museum at the Old Town Museum Complex. At nearby Sayre, the Beckham County Courthouse appeared in the movie, The Grapes of Wrath.

I-40 killed two more Route 66 towns, those of Hext and Texola, on either side of Erick, Roger Miller’s hometown.

Through Oklahoma, traveling the Mother Road provides a smorgasbord of restaurants, architectural styles, historic buildings, and ruins through its quaint small towns and metro cities. Enjoy its open stretches, winding roads, and many parks and lakes before heading onto the staked plains of Texas.