Geary, Oklahoma, is a small town located about 50 miles northwest of Oklahoma City, in Blaine County at U.S. Highways 270 and 281.

The Cheyenne and Arapaho Indians first permanently settled this land until the Organic Act of 1890 organized Oklahoma Territory from land formerly ceded to Indian Nations. After the reservation lands were split up and 160 acres were assigned to individual tribe members, the government purchased the surplus. It opened it to settlement during the “Cheyenne-Arapaho Opening” in April 1892.

A townsite company bought two quarter sections of land from Shubell Huff and his son William, who had filed claims after the land opening. The townsite was initially established one and one-half miles northwest of its present-day location. However, they moved southeast toward the railroad line when settlers learned that the Choctaw, Oklahoma, and Gulf Railroad was being built west from El Reno.

The town was named for Edmund Guerrier, a scout and an interpreter for the U.S. Army. Guerrier, of French and Cheyenne descent, had an allotment three miles northeast of the townsite. Because Guerrier was difficult to pronounce, the town’s name became Geary. A post office was established on October 12, 1892.

Soon after the town was established, several businesses and churches were built, and it became a trade center for the local agricultural area. By 1902, the community had grown dramatically and reported a population of 2,561. The First National Bank, known as “the oldest bank in Blaine County,” was the first business constructed in the new town. In 1903 G. F. Gillespie built the Bank of Commerce, later known as the American State Bank. Although the bank failed during the Great Depression, the Gillespie Building, listed in the National Register of Historic Places, today houses the Canadian Rivers Historical Museum. 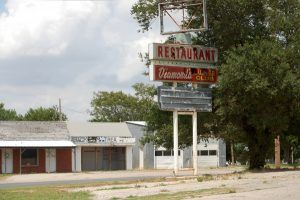 However, this transportation boom was short-lived, as, in 1933, a new Pony Bridge was built across the Canadian River downriver from Bridgeport. Route 66 was realigned directly from El Reno to Hydro, bypassing Calumet, Geary, and Bridgeport the following year. By 1940 the population had fallen to 1,634 people. However, Geary fared better than Calumet or Bridgeport, as today it is still called home to about 1,285 people. 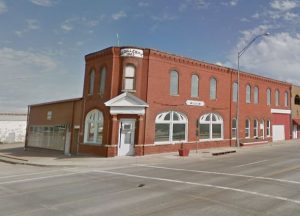 While in Geary, check out the Canadian Rivers Historical Museum, located at 100 E Main Street in the old Gillespie Building, which is listed on the National Register of Historic Places. Here, visitors can see an old Rock Island caboose across the street, the area’s first log jail used until 1909, and several themed rooms like a bank, post office, doctor and dentist office, barbershop, country school, and a turn-of-the-century kitchen. Displays include war items, Native American artifacts, old appliances and tools, and other historic artifacts. Admission is Free, but donations are accepted.

Located eight miles northeast of Geary is the site of Jesse Chisholm’s grave. A trader, guide, interpreter, and explorer, Chisholm blazed the Chisholm Trail and built several trading posts from Kansas City to the Red River. He died and was buried next to Left Hand Spring on March 4, 1868. A granite marker is at the site, which was added to the National Register of Historic Places in 1971.

From Geary, the old alignment of Route 66 makes its way southwest for 13.5 miles to the near ghost town of Bridgeport. You will soon come upon a long steep hill called Bridgeport Hill. Legend has it that in the early days of the Mother Road, many of the old Model A’s and Model T’s had to climb the hill in reverse to generate enough power to climb the hill. 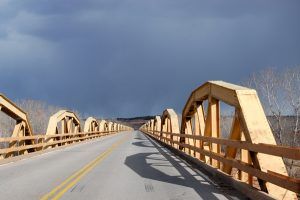 Before getting to Bridgeport, visitors will cross the historic Canadian River Bridge, the longest bridge on Route 66. Built in 1933, it spans the South Canadian River on the upgraded alignment of Route 66 (now US 281). The 3/4 mile long bridge consists of 38 pony truss sections, each 100 feet long. It opened in 1934. The west end of the Canadian River Bridge appeared in the 1939 classic film Grapes of Wrath, in the scene where “Grandpa” died and was buried. This bridge was along the newer section of Route 66 that bypassed these three small towns, replacing the old suspension bridge between Geary and Bridgeport.