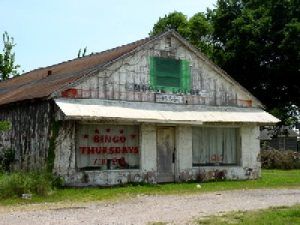 Beyond Vinita, Oklahoma, Route 66 winds through several small towns, alternating between two-lane and divided four-lane highway, on its way to Claremore. Though the old highway still sees regular use among the locals, some of the communities along this stretch have been left as virtual ghosts, while others are dotted with closed business testifying to better times.

White Oak got its start in about 1895 as a small settlement north of the present-day site but moved later to its present location after Theodore Jones, an early merchant, and Charley Brown built stockyards and invited the people at the earlier site to join them. A post office was established on October 31, 1898. The town was named for the many white oak trees in the area. 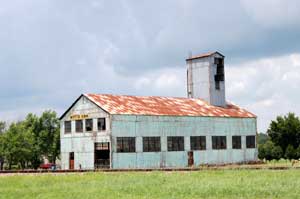 The Frisco Railroad built a spur at the site, and for the next 50 years, White Oak was a major shipping center for cattle. The railroad built stock pens and a large pasture nearby was made available for cattle to be held before shipping to Kansas City or St. Joseph, Missouri. The shipping of hay was also a thriving business during these years and several haybarns were situated along the railroad tracks.

Another economical mainstay in White Oak were several sawmills, the most important of which was the White Oak Sawmill, which processed the white oak trees into barrel staves — the strips of wood that are used to make barrels. Several buildings associated with the sawmill still stand on the west side of Route at the southern side of town.

The first school was located northwest of the present-day townsite and when it burned down, a new school was built closer to the community. Early on, a two-room house served as White Oak’s first hotel, used principally by visiting cattlemen. Later, Bud Miles built a hotel and rooming house which he operated for several years before selling it. There were also general stores that were operated by various businessmen. 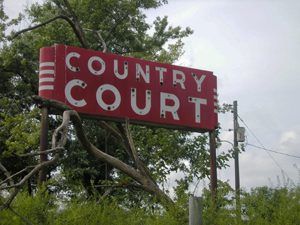 Route 66 passed through the town in 1926 bringing some prosperity to the community. By 1935, the community boasted just two stores — the O.M. Haynes General Store and George Vogel’s Hay and Feed Store. Mr. Haynes operated his general store for over 50 years before retiring in the 1960s, at which time, the store closed.

After World War II, the roads were improved and the trucking industry took business away from the railroad. Soon, railroad passenger service was discontinued and the cattle shoots and loading pens were removed. Unfortunately, even the original depot no longer stands.

In 1942, the White Oak gymnasium, a rectangular 100’x55′ addition to a pre-existing school building was constructed the Work Progress Administration. However, the school, itself burned down in 1943. It was replaced with the present-day elementary school. The old Gymnasium still stands today.

In 1946, when Jack D. Rittenhouse published his Guide Book to Highway 66, he described White Oak as “a small hamlet with a couple of gas stations and groceries, plus a school and a few homes. No cafes, garages, courts or other accommodations here.”

White Oak was bypassed when Route 66 was replaced by I-44 in 1957 and the same year, the post office closed.

Today, White Oak continues on in a very small way. It is unincorporated but still supports a grade school, a convenience store, an active church, and several homes.