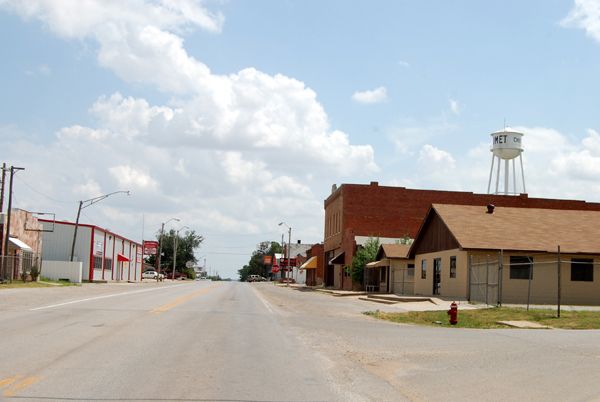 Heading west from El Reno, Oklahoma, on Route 66, this earliest alignment (1926-1934) of the Mother Road travels through several small towns that show the obvious suffering that results from superhighways bypassing small towns. The first three, Calumet, Geary, and Bridgeport, were cut off early in the Mother Road’s history when the El Reno bypass took them off the route in 1934.

Calumet, located in northwestern Canadian County, is about 13 miles northwest of El Reno on Highway 270.

The Cheyenne and Arapaho Indians first permanently settled this land until the Organic Act of 1890 organized Oklahoma Territory from land formerly ceded to Indian Nations. After the reservation lands were split up and 160 acres were assigned to individual tribe members, the government purchased the surplus and opened to settlement during the “Cheyenne-Arapaho Opening” in April 1892.

In 1898 Reuben G. Shirk platted ten acres of his farm for a townsite in response to the Choctaw, Oklahoma, and Gulf Railroad’s decision to construct a depot in the area. Calumet is a variant term for the Native American ceremonial pipe. 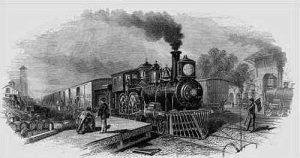 The Calumet post office had earlier been established in 1893 by Anna Cowdrey on her homestead about two and a half miles southwest of the town was then moved to the new community.

In 1901 Calumet claimed a population of around 100, but shortly after Oklahoma became a state in 1907, the town had almost 300 residents. In 1908, it gained its first newspaper — the Calumet Chieftain, which served as the town’s newspaper until 1942. By 1911, the agricultural community had three combination mills and elevators, two general stores, a furniture store, and a hardware store.

In 1926, the first original alignment of Route 66 was constructed through Calumet. It looped north from El Reno, through Calumet and Geary, before going south through Bridgeport. Bringing more people to the area, by the end of the 1920s, the Calcument’s population was 451, making it one of the larger towns in Canadian County. 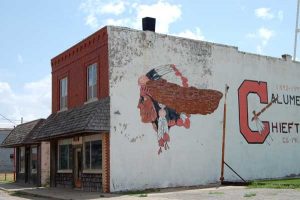 However, this transportation boom was short-lived, as, in 1933, a new Pony Bridge was built across the Canadian River downriver from Bridgeport. Route 66 was realigned directly from El Reno to Hydro the following year, bypassing Calumet, Geary, and Bridgeport. By 1940 the population had fallen to about 300 people. In 1942, the town was incorporated to construct a city water system.

In the 1970s and early 1980s, Calumet economically benefited from the growth in area oil and gas fields and the continued prosperity of local farms. While the oil and gas market collapsed in the mid-1980s, agriculture-related businesses continued to do well.

Today, this small town is called home to about 600 people and supports all grades in one school building. Old Route 66, which runs right through the center of town, still provides a peek at its vintage past with several murals painted on its buildings.

Continue the journey of this old alignment to nearby Geary, Oklahoma, just 11 miles distant.