Claremore, Oklahoma, got its beginnings when Chief Glahmo led his tribe of Osage Indians from Missouri in 1802. He soon established a fur trading post along the Verdigris River. The trading post sat atop a 25-acre mound which came to be known as Clermont, a French word meaning “clear mountain.” Over time, traders and Indians alike began to refer to the Chief as “Chief Clermont.”

When the area became part of the Louisiana Purchase in 1803, it was designated as Indian Territory. Before long, the Cherokee tribe was forced from their eastern homes along the infamous “Trail of Tears” and was given the title to the land, including Clermont Mound. The Osage Indians were removed to a reservation, which would later be called Osage County.

A settlement primarily of Cherokee Indians was established on Clermont Mound, beginning with a general store, a blacksmith shop, and a school. In 1874 the post office was established to name the town after Chief Clermont. However, due to a clerical error, the name was listed as Claremore, and so it was.

Adapting to the “white men’s” ways, the Cherokee prospered, organized constitutional governments, published newspapers, and established an extensive educational system. In 1889, when the U.S. Government began to open up unassigned lands in Indian Territory to the white men, they flooded the territory and soon took control of Claremore. By the turn of the century, Claremore was larger than Tulsa.

In 1903, a test oil well was drilled in Claremore, but instead of finding oil, the drillers discovered a large flow of artesian mineral water. Before long, radium bathhouses became the rage in Claremore.

In 1907, Rogers County was created from the Cherokee Nation and was named for Clement V. Rogers, the father of Will Rogers and a member of the Constitutional Convention.

When Route 66 came through the city, it was already well established and quickly built motor courts, service stations, and restaurants along the highway to service the many road travelers. 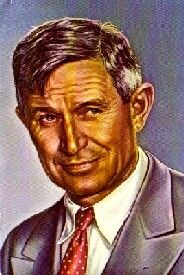 Claremore is best known as the hometown of Oklahoma’s favorite son, Will Rogers. Rogers was born nearby in a rough log cabin “halfway between Claremore and Oologah on November 4, 1879. He rose from a vaudeville career as a sideshow rope‑tricks artist to become one of the most popular humorists in America.

Today, Claremore features the Will Rogers Memorial, which includes an eight-gallery museum with theaters and items from his cowboy trick roping days to Vaudeville. Another “must stop” is the Will Rogers Hotel. Once famous for the radium baths, it has now converted its upper floors to senior apartments; and the J.M. Davis Arms and Historical Museum displays over 20,000 firearms. Claremore is the setting of the classic Broadway musical, “Oklahoma,” to which the Lynn Riggs Museum is dedicated. 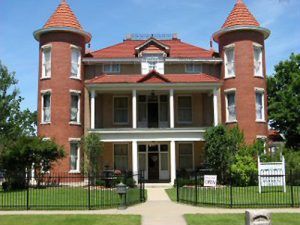 Another interesting visit is the Belvidere Mansion, a restored turn of the century home that now serves as a museum and is allegedly haunted! To round out your history-filled adventure in Claremore, visit the Oklahoma Military Academy Memorial Museum and scores of antique stores that line its downtown streets.

Claremore also can boast as the hometown of singer Patti Page, who sold millions of records during the 1950s and ’60s, including the now-classic “Tennessee Waltz.” Incidentally, Page graduated from Daniel Webster High School in Tulsa, which also lies along Route 66. Along with Rogers and Riggs, Page has a major street named after her in Claremore. Page died at age 85 on New Year’s Day 2013.

Continue your travels along Route 66 by making a “must stop” to see the Blue Whale in Catoosa before heading down the road to Tulsa.