Chelsea, Oklahoma, located in Rogers County in the northeastern part of the state, is a small town of about 1,950 that primarily relies on farming, ranching, and oil production.

When white settlers began to push westward, this area was inhabited by Osage Indians. In 1817, Cherokee warriors accompanied by white settlers carried out an attack here against the Osage in revenge for their having attacked homesteads in western Arkansas. When the battle was over, Osage leader Chief Claremont was killed and the Osage vacated the area and moved westward. The Cherokee then began to move into the rich land basin formed between the Grand and Verdigris Rivers.

After the discovery of gold in Georgia, President Andrew Jackson authorized the Indian Removal Act in 1830, which required the Cherokee and other tribes to move west of the Mississippi River. In 1835, the Cherokee who had not moved voluntarily were forced westward on the Trail of Tears and many settled in the area that would later become the town of Chelsea.

During the Civil War, some of the Cherokee aligned themselves with the Confederacy which caused them to forfeit rights and land when the war was over. The Treaty of 1866 forced the Cherokee to cede land and rights to the railroad lines. The Atlantic and Pacific Railroad was provided with land grants to run their line through the Cherokee Nation. However, when Atlantic and Pacific Railway went bankrupt, its owners incorporated the St. Louis-San Francisco Railway which began construction on tracks from Seneca, Missouri to Vinita, Oklahoma. An extension of another 64 miles began in 1882 through Chelsea to Tulsa. 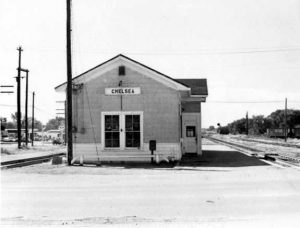 When the railroad was surveying the extension, a railroad official named the station for his native hometown of Chelsea, England. With the opening of the rail line, a flour mill began operating in 1882 and a post office was established on November 21, 1882. That same year, Edward Byrd, whose wife was a Cherokee woman, discovered oil seeps southwest Chelsea, however, no action was immediately taken. In the beginning, Chelsea’s primary economic mainstays were cattle ranching and farming oats, corn, wheat, and pecans. The community also became known as a shipping point for cattle, hay, and other products.

It was also about this same time that Chelsea was often visited by Will Rogers during his youth as his sister, Allie McSpadden lived there. Many years later, Gene Autry, would live in Chelsea when he worked for the Frisco Railroad. 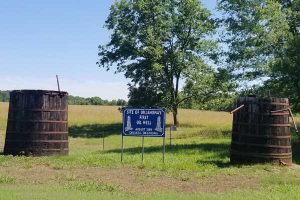 In 1887, William B. Linn, a Pennsylvanian, and a group of investors from Kansas organized the United States Oil and Gas Company which leased drilling rights from the Cherokee Nation on 100,000 acres lying west of Chelsea between the St. Louis and San Francisco Railroad and the Verdigris River. In 1889, the United States Oil and Gas Company drilled the first oil well in Indian Territory about five miles southwest of Chelsea. The same year, the community incorporated as a town in the Cherokee Nation.

Soon more oil wells were drilled and the whole area became known as the Chelsea-Alluwe Oil Field, which was responsible not only for the town’s growth but also in shaping the destiny of the entire state of Oklahoma. 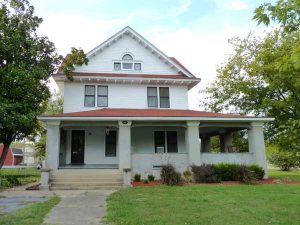 The United States Townsite Commission surveyed and officially platted Chelsea in 1902. Afterward, the brick streets were laid in the shape of a spoked wheel, with downtown Chelsea as the hub.

In 1912, the Hogue House was built at 1001 South Olive Street in Chelsea. The two and one-half story home is significant because it was the very first Sears kit home in the state of Oklahoma and one of first to be built west of the Mississippi River. Joe Hogue, a local cattleman, visited Chicago, Illinois in 1911 where he saw a display of Sears building materials at Sears headquarters, and included in that display were a few “Sears Modern Homes.” He liked the Saratoga plan, bought it for $1,600, and the materials were shipped to Chelsea via The St. Louis and San Francisco Railroad. The home stayed in the Hogue family until 2005. Listed on the National Register of Historic Places, it is a privately-owned residence today.

The Chelsea-Alluwe Oil Field continued to produce oil until the early 1920s before it played out. That same decade, Route 66 was blazed through Chelsea in 1926, at which time the town boasted at least one oil refinery and a booming commercial district along Walnut Street. When Route 66 was first built, it curved south just 1/4 mile east of Chelsea along 4260 Road and crossed Pryor Creek along a 123-foot-long steel truss bridge, before making its way along 1st Street toward Walnut Street in Chelsea. The Historic Historic Pryor Creek Bridge remains open to traffic today and was listed on the National Register of Historic Places in 2006. In 1932, the route was realigned to the north, bypassing this section. 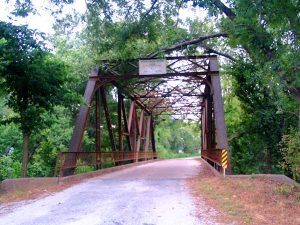 By 1930, Chelsea was called home to 1,527 residents. That decade the old Chelsea Motel was built at the intersection of Walnut Avenue and East 1st Street on Route 66. The locally owned motel was prominent at the time it was built and held six units. Its neon sign was added in 1947. During the next decades, the motel changed hands occasionally and responded to the increasing demands of the traveling public — like telephones and air conditioning. The motel closed in 1976. Today the old motel is privately owned and used for storage. It is not accessible to the public but can be viewed from the public right of way.

Unfortunately, Route 66 was not permanent. But by the mid-1950s the road was congested and unsafe and construction of the Turner and Will Rogers turnpikes in 1957, took traffic away from the small town.

Route 66 continues southwest for eight miles before it reaches the small town of Foyil. Along the way, travelers will pass through what was once the community of Bushyhead. But of this 1898 community, named after a Cherokee Chief, nothing remains today with the exception of several area homes. 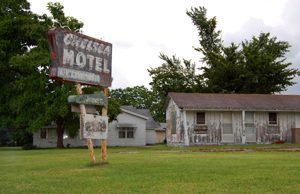