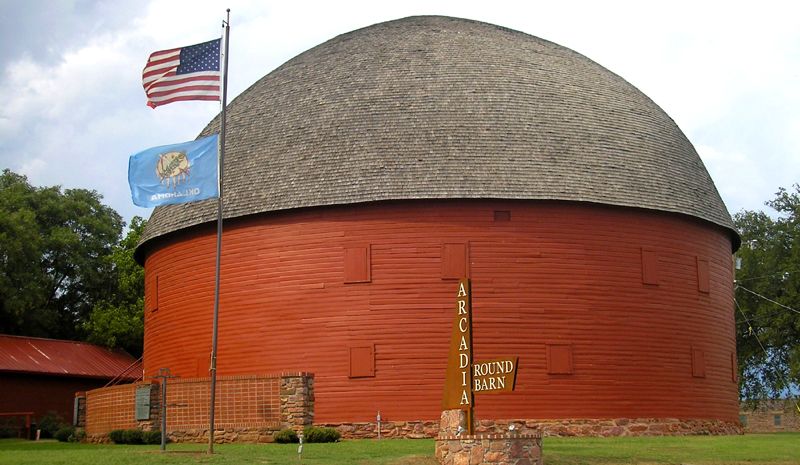 Arcadia, Oklahoma, is home to the famous 1898 round barn, the most photographed building on Route 66. 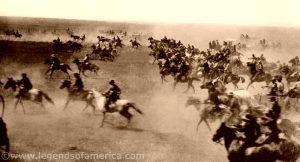 A small agricultural center located in northern Oklahoma County, Arcadia got its start soon after the 1889 Land Rush. As new settlers came to the area, many claimed the land around the Deep Fork River and its tributaries and began to farm. The settlement was named after the Greek town of Arcadia, which is famed as a rural paradise. The early residents felt the name reflected the area’s quiet, peaceful nature.

The town gained a post office in August 1890. In 1892, William Harrison “Big Bill” Odor established a homestead on the Deep Fork River, and in 1898, he began to build a large round barn. He also established a sawmill to cut the local bur oak into timber. The greenwood was then fashioned into boards that were soaked in water while green and set in special molds to bend them into a curved shape. 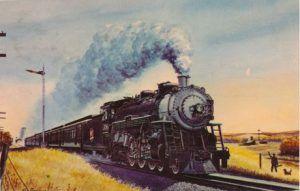 During its construction, three young workers convinced Odor to install hardwood flooring on the upper level rather than planed rough boards, as it would be more suitable for dancing. The workers offered to pay the difference, and Odor accepted. Construction of the barn was completed in 1898 and measured 60 feet in diameter, and was 43 feet high. Odor used the barn to store hay, grain, and livestock on the lower level, and the upper level became a community center from the start. For the following decades, regular barn dances drew crowds and musicians to Arcadia from a wide area.

In 1902, the Missouri, Kansas & Texas Railroad began constructing a line from Bartlesville to Oklahoma City. In 1903, William H. Odor and Benjamin Newkirk donated land and formed a townsite company. A railroad station was soon built, and farmers began to ship cotton and other farm goods out of Arcadia. By 1907, the town was called home to 994 residents. Some of its earliest businesses included  A. H. Crabb’s Pioneer Mercantile and cotton gin, B. F. Ogle’s Up-to-Date Grocery, Odor and McMinimy Hardware, Sweat’s Restaurant, and F. C. Dowell’s Arcadia Hotel. By 1910, it also had three churches and two schools, one for whites and a separate school for blacks. By the 1920s, Arcadia had telephone service, two banks, seven general stores, a pharmacy, two cotton gins, and other businesses.

In 1924 a fire devastated the downtown area destroying many of the buildings on Main Street. However, Tuton’s Drugstore, which was built in 1917, survived. It stands at 200 N. Main Street and is listed on the National Register of Historic Places. Today the two-story sandstone building is the only remaining building of Arcadia’s former business district. Most of the other buildings were never replaced after the fire. 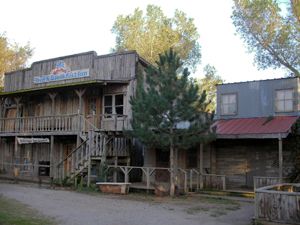 A long-time popular stop in Arcadia, Oklahoma, along Route 66, Hillbillee’s café and Bed and Breakfast is closed today.

In 1926, Route 66 came through town, and a number of service businesses catering to travelers were established. However, during the Great Depression, many residents moved to larger towns seeking jobs.

In the early 1950s, the Turner Turnpike replaced old Route 66 between Oklahoma City and Tulsa, wiping out many of the businesses in Arcadia. In 1968 the area schools closed, and Arcadia students were bussed to Oklahoma City schools. Making matters worse, heavy rains flooded the area and damaging bridges, roads, and railroad tracks in 1974. Afterward, railroad service was discontinued.

By the late 1970s, the round barn had deteriorated badly. It was listed on the National Register of Historic Places in 1977 but continued to decay, and the barn’s roof collapsed in 1988. Afterward, a group of volunteers known as “The Over the Hill Gang” began to restore the building. Today, the building is open daily to visitors with no fee.

By 1990, the town was reduced to just 320 residents. Today Arcade is called home to about 270 people, most of whom commute to jobs in the Oklahoma City area. 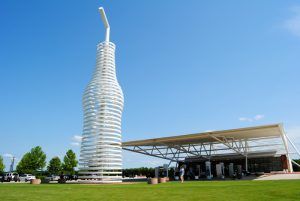 In addition to the round barn, Arcadia also provides several other picturesque opportunities at the now-closed HillBillee’s BBQ as you first enter this small town. This was once the home of an original Route 66 Gas Station, Café, and Motor Court. Legend has it that in the early years of Route 66, the motor court would even provide a “companion” for male travelers.

A popular new addition to Arcadia’s tourism landscape is Pops convenience store and restaurant on the city’s west edge. Built by natural gas mogul Aubrey McClendon and designed by renowned Oklahoma architect Rand Elliott, Pops features more than 500 flavors of soda pop in its coolers, diner-style comfort food in its restaurant, and a 66-foot-tall soda bottle next to the highway that’s adorned with multicolored LEDs. Combining modern service with classic roadside kitsch, Pops has been packed with visitors each weekend since it opened in 2007. 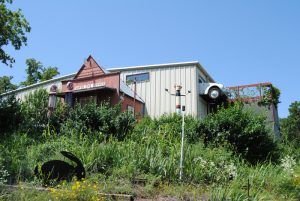 About a mile east of Arcadia is John Hargroves’ Auto Trim Mini Museum; a former airplane and school bus mechanic, John grew up in Oklahoma City and was always fascinated by Route 66. After he retired, he bought the land and began to build his attraction which features miniaturized versions of Route 66 icons across the country all in one place. Outside, visitors see a mock-up of the Twin Arrows of Arizona, a Volkswagen Beetle nose down in the dirt, a pond with a replica of the Catoosa Blue Whale, and numerous statues, gas pumps, a half-buried airplane, and more. Inside is a Route 66 diner, a theater, and a working garage filled with memorabilia. The attraction is located at 13441 E Hwy 66.

The road continues westward to the outskirts of Edmond, Oklahoma, and the suburbs of sprawling Oklahoma City. 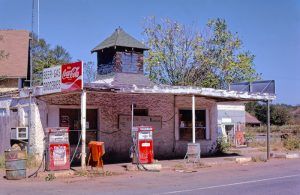 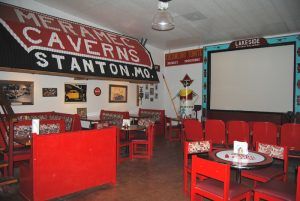