Hydro, Oklahoma, located in Caddo and Blaine Counties in the eastern part of the state, is a small town on Route 66. 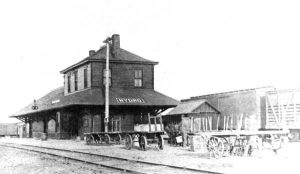 The town got its start after the Wichita and Caddo Indian lands were opened to settlers in 1901. A lottery was held in which 164,000 homesteaders registered to draw for 13,000 plots of 160 acres each. The town was officially founded on August 6, 1901, near the Choctaw, Oklahoma and Gulf Railroad and was first called Caddo. However, when the post office opened in September 1901, the name was changed to Hydro, for its abundance of good well water. The same year, Caddo County’s first newspaper, the Hydro Review was established. The first church was also established.

In September 1904, the first Hydro Free Fair was held. Originally called the Hydro Harvest Festival, it is reportedly Oklahoma’s longest-running “free fair.” The town grew with an economic base of agriculture, including corn, cotton, and livestock. By 1910, the community was called home to 562 people. 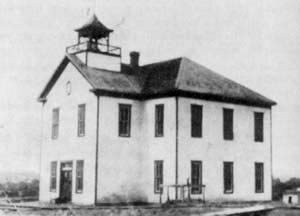 When Route 66 was created, it ran along the southern side of the town, which really increased business in the community.

One of the first filling stations built on Route 66 was established by Carol Ditmore in 1929. The two-story craftsman-style building had living quarters upstairs where Diltmore and his family lived. He sold the station five years later to W.O. Waldrup and his wife in 1934, who changed the name to the Provine Service Station, which it still officially known as today. The Waldrups also added some tourist cabins which eventually became a five-room motel.

By 1930, Hydro was called home to 948 people. But the Great Depression and the years of the Dust Bowl took their toll on Hydro as well as the rest of Oklahoma. People were lost their land when their crops failed and many of them moved away. Recovery efforts included that of the Works Progress Administration which paved Hydro’s streets and built the present schoolhouse and community center.

In 1941, the Provine Service Station was sold to Carl and Lucille Hamons. The Hamons lived at the station in quarters located behind and above the business. However, just a few months later, World War II began causing fuel and tire rationing and resulting in lower-traffic on the highway.

Carl began hauling hay to the northern states to support the family and Lucille learned how to pump gas, change headlights, and fix flat tires. In addition to taking care of her three children, she also maintained the cabins, doing the wash in an old wringer washing machine.

“During this time, people from Arkansas, Missouri, Kansas, and eastern Oklahoma were traveling the road to the West Coast to find jobs… Many times I would have people stop that were completely broke, and I would feed them and give them gas in exchange for some appliance or other articles of value they might have. Sometimes I would just buy their old broken-down cars, and then they would catch the bus and head on west looking for work. 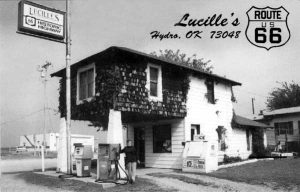 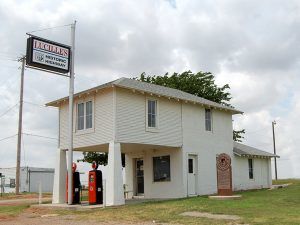 When the war was over, business rebounded and traffic increased substantially during the 1950s and 1960s. But, it would not last. On January 31, 1971, Carl Hamons died and Lucille was left alone to run the business. The same year, I-40 took the place of Route 66 and Hydro was bypassed and Lucille closed the motel.

Many of the businesses on old route 66 died, but Lucille, who had long tended to travelers of the Mother Road, hung on. She continued to serve mostly a local clientele and the station became known for vending very cold beer from its old cooler at a time when nearby Weatherford, Oklahoma was officially a dry town. The last fuel was dispensed in 1986 and the station ultimately became a souvenir shop. 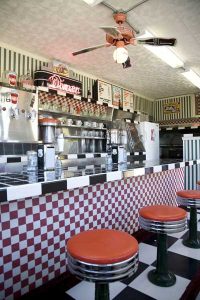 In the 1990s, when Route 66 began to see a revival, Lucille was made famous and dubbed “The Mother of the Mother Road.” In July 1997, Lucille’s station was placed on the National Historic Register and in 1999, Lucille received the Oklahoma Route 66 Hall of Fame Award.

Lucille continued to run the store until the day she died, 59 years after buying the property. Mrs. Hamons died on August 18, 2000, but is lovingly remembered by the many long-time travelers of Route 66. Today, this classic old gas station is only one of two upper-story over style stations left on Oklahoma’s ribbon of Route 66. Route 66 enthusiast Rick Koch shored up the gas station building in 2007 as a photo-op and built the popular Lucille’s Roadhouse restaurant in nearby Weatherford in tribute. The rest of the building was also completely restored.

The station is located a half a mile south of Hydro at Route 66 and S. Coleman Avenue.

The Mother Road skirts the southern edge of the community, but taking the time to see Hydro’s downtown district will reward you with several vintage peeks, including the Route 66 Soda Fountain, where you’ll feel as if you’ve stepped back in time and Nutopia Nuts’ N More (formerly Johnson Peanut Company), which has been doing business for almost 80 years, This shop offers every kind of peanut, peanut candy, and peanut oil available.

Return to Route 66/I-40 Frontage Road and drive west to continue the route 66 journey to Weatherford. If you are driving at night, keep your eyes open because legend has it that this part of the old Mother Road is haunted by an elderly humped back man. Said to appear in a brown trench coat, wearing a Bogie style hat pulled down over his eyes, he has often been spotted walking along the old highway, especially on foggy or rainy nights. Reportedly, one person picked this old figure up one wet night and the eerie little man wouldn’t talk to him. Soon, the vagabond tried to jump out of the moving car. The driver pulled over to the side and let him out only to spot the man walking again several miles ahead of the driver on down the road. Another person said that they thought they had hit the man with their vehicle but when they stopped to check on him, no one was there. 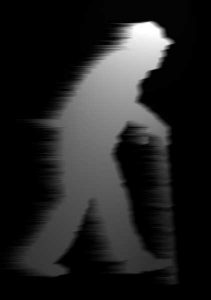 Do you believe it? Keep your eyes peeled!