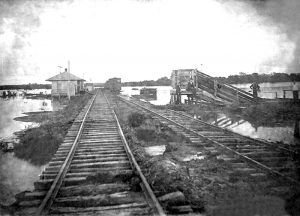 The town started in about 1880 when a man named Christian T. Wells established a trading post in the northern part of the Kickapoo Reservation. Several years later, Wells established a post office on September 19, 1884, and served as the first postmaster.

The Kickapoo lands were opened for a land run on May 23, 1895, and the trading post and post office closed. Thomas Craddock staked a claim near the trading post and deeded land for a town to be established near where Captain Creek joined the Deep Fork River. The plat was laid out by J. L. Ross, a pharmacist serving as town clerk at the time. The post office reopened on June 15, 1897. Cotton farming was the primary economic mainstay in these early years.

A road soon linked Wellston  Chandler and Oklahoma City, and in 1898 the Arkansas and Oklahoma Railroad (later the St. Louis and San Francisco Railway) was built north of the town, and a train station was established. By 1900, Wellston served as a trade center for the surrounding agricultural area, and the town was called home to 383 people. 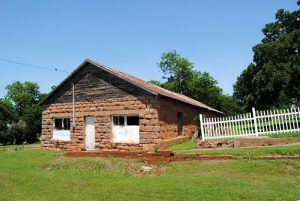 An old building in Wellston, Oklahoma by Kathy Weiser-Alexander.

During the early 1900s, Lincoln County successfully lobbied to have the Ozark Trail pass through it, and by 1918, the dirt road was established through the town. Early establishments included a school, three churches, general stores, two lumberyards, two hotels, cotton gins, a bank, and a brickyard. The Wellston News served the residents from 1899. A subscription library was started in 1918, and a brick schoolhouse was built in 1922.

In 1926, Route 66 was established, following the old Ozark Trail. It would pass right through the town for the next six years. However, in 1932 Route 66 was rerouted to run one-half mile south of Wellston, threatening the town’s survival. The original alignment, now called OK-66B, turned north at Ash Street and looped through Wellston, before turning back to the southwest and following an east-west course towards Edmond. This alignment became known as the “Loop.” In creating the new alignment, which bypassed Wellston to the south, the U.S. Bureau of Public Roads wanted to remove the many right angle curves that followed property lines and make a straight line from Warwick to the west. This new alignment which was fully paved became known as the “Gap.” 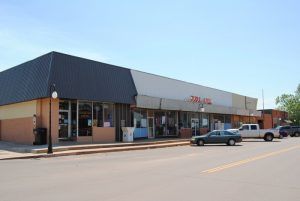 But, the town of Wellston knew that they would lose traffic and revenue if travelers took the shorter route, so they sued for the “Loop” to be paved. The lawsuit went all the way to the Oklahoma Supreme Court ruled in its favor, but the U.S. Bureau of Public Roads but required the State of Oklahoma to pave the “Loop.”

But, for Wellston, it wouldn’t be enough. The Loop didn’t attract traffic through the town by 1939; only seven cars passed by every hour through town, while some 600 passed along the newer alignment south of town. However, the town retained its population. 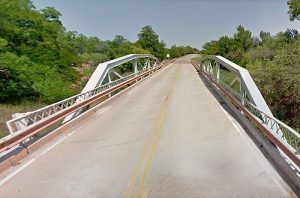 On the east side of Wellston is Is the old Pioneer Barbeque on the north side of Route 66. Here, once stood the popular Pioneer Camp, a former tourist camp that included a motel and gas station.

An original camelback pony truss bridge, built in 1933 on Route 66B, can be found on the west side of Wellston. The 225-foot long bridge carries the “Loop” segment of Route 66 across Captain Creek. It was listed on the National Register of Historic Places in 2004.

Route 66 continues westward for about eight miles to another small town – Luther, Oklahoma. 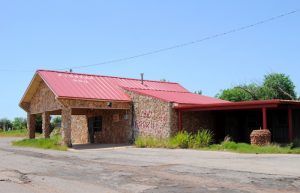 The old Pioneer BBQ on route 66 in Wellston, Oklahoma by Kathy Weiser-Alexander.