Luther, Oklahoma, located on Route 66 in far northeastern Oklahoma County, started in about 1891, two years after the Oklahoma Land Rush. 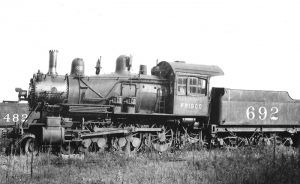 Early settlers called the community that formed in the area Garnettville. However, in February 1898, Luther F. Aldrich, of Cumberland County, Illinois, purchased land along the right-of-way for the St. Louis and Oklahoma City Railroad (later the St. Louis and San Francisco Railway.) Situated on the Deep Fork River, Aldrich platted a townsite in April, and by July, a post office was opened. Aldrich’s partner, Charles G. Jones, a wealthy Oklahoma City railroad businessman, suggested the name “Luther” after both his son” “Luther” and his partner.

In 1903 the Missouri, Kansas, and Texas Railway began building tracks from Oklahoma City north to Osage, reaching a point one mile north of Luther in June 1903. Two years later, the town was incorporated. By the time Oklahoma became a state in 1907, Luther was called home to 423 people, at which time the city claimed that it led the state with five cotton gins and shipped the largest quantity of cotton of any Oklahoma town. 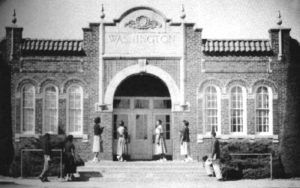 Booker T. Washington High School, one of the best African-American schools in the nation, was located in Luther, Oklahoma.

In 1916, the Booker T. Washington High School for African Americans opened in Luther, heralded as one of the premier high schools for blacks in the United States. By 1920, Luther’s population was 601, at which time it had four churches, two banks, a weekly newspaper, and telephone service. In 1922, the Booker T. Washington High School expanded, but unfortunately, it was destroyed by fire in December 1930. However, it was rebuilt the following year.

In 1926, Route 66 came through on the northern side of Luther, but the Great Depression took its toll on the area. Many farmers were foreclosed on and relocated, resulting in many businesses closing their doors. In 1940, the town supported 425 people but still had several stores and services. After World War II was over, both railroads discontinued services through Luther. By that time, those who could afford an automobile became commuters, driving to Cushing, Tinker Air Force Base, Oklahoma City, Guthrie, and Langston University to work. 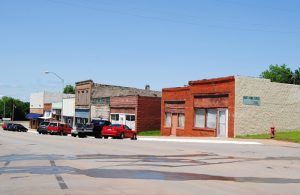 In 1953, the Turner Turnpike from Oklahoma City to Tulsa diverted traffic away from Luther, hurting some businesses, but the town retained its population. The same year, the students of Washington High School proudly presented their “first” yearbook to the student body, but it would be the first and only yearbook for the high school. The following year, the US Supreme Court ruled in Brown versus the Board of Education that segregating blacks and whites in school was unconstitutional. The Class of 1955 was the last to graduate from Washington before integration. After desegregation, the Washington campus was used for a few more years for all students. 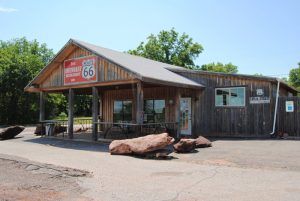 The Boundary Restaurant about three miles west of Luther, Oklahoma, on Route 66 by Kathy Weiser-Alexander.

In the 1960s, Luther began to grow, and by 1870 it had a population of 836 people. By the 1980s, the main building of the Booker T Washington High School had deteriorated to the point that it was torn down. All that survived was the Industrial Arts building, which now serves as the Headstart building. Today the site of the high school is a memorial park.

Today, Luther’s population is estimated to be about 1,750. It is located about 15 miles east of Edmond and 30 miles northeast of Oklahoma City.

About 4.5 miles west of Luther on Route 66 are the ruins of an old Conoco Service station on the north side of the road. The roofless stone building is thought to have predated Route 66, built between 1915 and 1920. Locally called the Rock of Ages Station, it had two fuel pumps, one for regular gas and one for ethyl. It also had drums that dispensed oil and kerosene that could be purchased. Cold soda pop was sold on days when the iceman came by. The soda was stored in a large metal box, and chipped ice was packed over it. Hard candy was also sold, but chocolate was only available in the winter because, in the summer, it would melt, and there was no refrigerator. 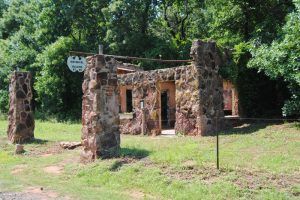 An old Conoco Station on route 66 about four miles west of Luther, Oklahoma, by Kathy Weiser-Alexander.

On the front of the station, a sign tells an interesting story about how its owners were counterfeiters in the 1930s. According to the tale, the two owners were approached by a salesman who offered to sell them a set of metal currency plates so they could “manufacture” $10 bills. It was a difficult time during the Depression, and the owners accepted. They soon built an addition to the back of the building, where they increased their revenue with the new counterfeit product. Soon they were passing the bills off to unsuspecting customers and spending some for themselves. However, when one of them passed a counterfeit bill in Oklahoma City, they were soon caught. The station was raided, the plates and ink found in the back room, and the two were arrested and sent to jail. Afterward, the station closed and fell into ruin. Later in the 1940s, a body was found there, a murder victim, who was never identified.

Though this legend persists, researchers have found no evidence that it happened. Firstly, no stories have been found in local newspapers about a counterfeit operation taking place anywhere in the area at this time. Further, there is no mention of anyone in Luther being arrested. There is no trace of a secret backroom, but if it was made of wood, that could have quickly disappeared. And finally, local lore said the station closed after the place was raided and its owners jailed. However, a 1940s photograph shows it was still operating. In any case, the legend makes this place even more interesting, true or not.

Route 66 continues westward for about three miles to Arcadia. 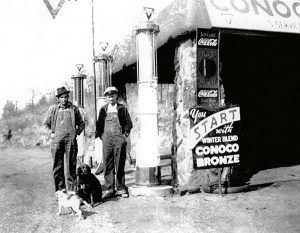 Conoco Station west of Luther, Oklahoma in the 1940s.