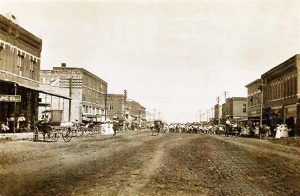 Afton, Oklahoma, located in southwest Ottawa County, is a small town on Route 66 that got its start in 1886.

Settlement in the area began in what was the Cherokee Nation when the Atlantic and Pacific Railroad was building tracks through the area to Vinita, Oklahoma in 1871. At that time, the settlement was a farming community that thrived utilizing the rich, black soil along Horse Creek.

In 1886, a post office was established and the town was named by a Scottish railroad surveyor for his daughter, who was named after the River Afton in Scotland, made famous by Robert Burn’s poem. 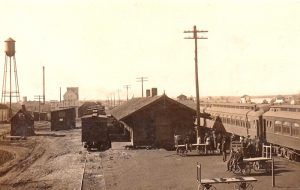 By 1900, the town boasted a population of about 600 people and the next year, it grew due to the arrival of the Kansas City, Fort Scott and Memphis Railroad. With two railroads coming through the town, Afton became a busy railroad center and by 1910, had grown to a population of 1,279. By the next year, the town boasted two new school buildings, two hotels, two banks, a brick and tile plant, a creamery, a newspaper, mills, grain elevators, a large waterworks, and many other businesses. Agriculture and ranching also continued to play a significant role in the area economy. By 1920, the town was called home to about 1,500 people. However, the population later dropped to about 1,200 during a post–World War I agricultural depression. 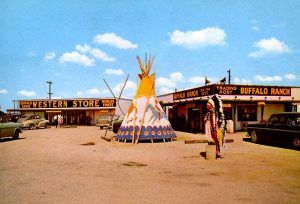 However, further prosperity came to the town when Route 66 barreled through the community in 1926. Soon service stations and motor courts popped up to serve the many travelers along the Mother Road. During these years, Afton provided one of the most popular tourist stops along the Mother Road – that of the Buffalo Ranch, which included not only buffalo but also llamas, yaks, and a petting zoo and barbeque. Providing another boost was the creation of nearby Grand Lake O’ the Cherokees in 1940.

Through the years, these attractions maintained Afton’s population at about 1,200 until it started to drop in about 1960 after the town was bypassed by I-44 in 1957.

Over the next years, businesses that formerly catered to Route 66 travelers, including the Palmer Hotel, Rogers’ Motel, Rest Haven Motel, Green Acres Motel, and more were forced to close. The popular Buffalo Ranch was closed down in 1997. Today it is the home of the Buffalo Ranch Travel Center convenience store. Nothing of the original complex remains, but the new owners occasionally keep a buffalo or two on the premises as an homage to its past. The historic Palmer Hotel built in 1911, suffered a massive fire on July 1, 2020, along with several other historic downtown buildings. 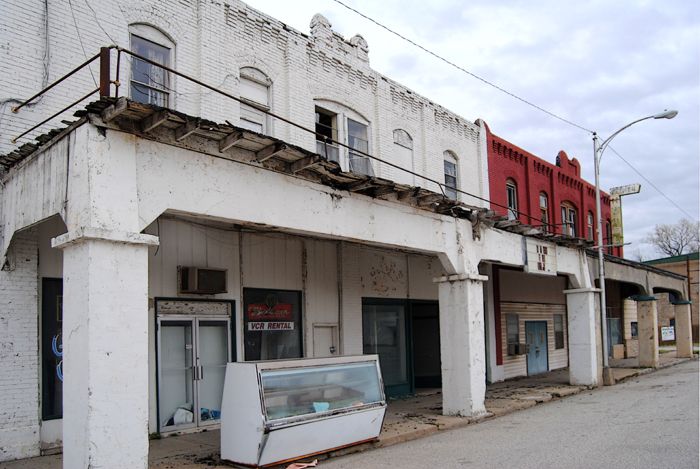 Amazingly, though most of its businesses are gone and the town has a bit of a ghost town feel, Afton continues to be called home to about 1,000 people. For visitors, this small town continues to boast several examples of classic Route 66 roadside architecture. The primary one is a former 1937 D-X gas station which has been beautifully restored as the Afton Station and Packard Car Museum, which has long served as a visitor center for travelers. However, the building went on the auction market after the death of its owners in June 2019. 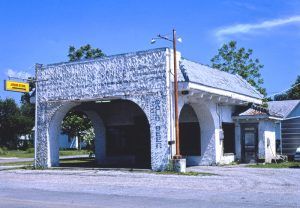 After the DX gas station went out of business, it became a liquor store. Photo by John Margolies, 1982. Refurbished Afton Station that became a visitor center and museum by Kathy Weiser-Alexander. 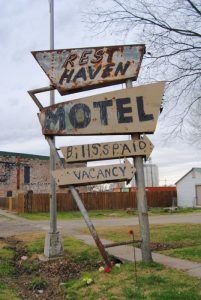 Old sign for the Rest Haven Motel by Kathy Weiser-Alexander.

Other photo opportunities present themselves at the remains of the old Rest Haven Motel where many a weary Route 66 traveler once laid their heads. Amongst the fading downtown buildings is the old Palmer Hotel and Bassett’s 1922 Grocery Store. A fit further west is the decaying Avon Motel.

The road continues to Vinita, Oklahoma, the crossroads of America. Along the way, just eight miles southwest of Afton along Highway 59, a wonderful side trip presents itself at Grand Lake O’ The Cherokees.which provides visitors with boating, skiing, fishing, swimming, and sailing opportunities. Across the lake in Grove, Oklahoma is the site of Har-Ber Village, one of the largest antique museums in the United States. This reconstructed turn-of-the-century village contains over one hundred buildings and a collection of thousands of items representing America’s past. 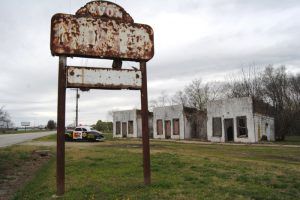 The old Avon Motel in Afton, Oklahoma by Kathy Weiser-Alexander.