Race for Land Mural at City Hall in Clinton, Oklahoma. Painted by Loren Mozeley in 1938.

Conveniently located at the crossroads of I-40 and Highway 183, with Route 66 running right through the downtown business district, Clinton earned the nickname the Hub City of Western Oklahoma. 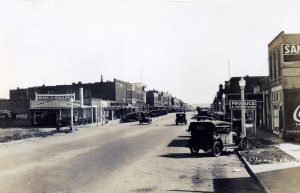 The community got its start when two men by the names of J.L. Avant and E.E. Blake stood atop a boxcar looking over the countryside in 1899. Spying the fertile Washita River Valley, one of them said, “There’s the place to build a town.” And so it began, but not quite that easy.

Indians owned the land, and the Federal Government specified that an Indian could sell no more than ½ of his 160-acre allotment, and only then after Congressional approval. To get around this stipulation, the men made plans to purchase 320 acres from four different Indians to begin the small settlement of Washita Junction. However, the town could not obtain approval, as a political feud developed between Washita Junction and the nearby frontier town of Arapaho.

Finally, after several years, the approval was granted in 1902, and almost overnight, Washita Junction developed into a town. The first businesses were the townsite office; a newspaper called the Custer County Chronicle, and the First National Bank Building. When a post office was started, the postal department would not accept the name of Washita Junction, so Clinton was chosen in honor of the late Judge Clinton Irwin. When the Frisco Railroad came through, Clinton became an important shipping center for the area. 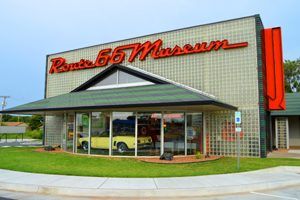 Clinton continued to grow, and when Route 66 came straight through town, several new businesses sprang up, including Pop Hicks Restaurant in 1936. Sadly, what became a landmark icon as the longest-running restaurant on Route 66 burned down in 1999.

In 1942 the federal government built a naval airfield at nearby Burns Flat, bringing further prosperity to the area. It was during this decade that the population of Clinton grew to nearly 7,000 residents. In 1949, the airfield was deeded to the City of Clinton, specifying that the land could be recaptured in case of national emergencies.

Just five years later, the government leased the site back and used it as the Clinton-Sherman Air Force Base. Purchasing more land, the site soon expanded to more than 3,500 acres, where both the U.S. Air force and the Navy utilized the airfield for training purposes. When military operations were de-emphasized, the Clinton-Sherman base was designated for closure in 1969. The entire complex was deeded to the City of Clinton in 1971 and three years later became the Clinton-Sherman Industrial Air Park. 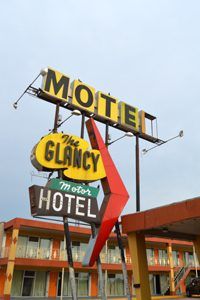 Clinton was the one time home of the National Highway 66  Association, which operated for almost30 years beginning after World War II. Though the association was disbanded in the 1980s, it instilled in Clinton an adhering interest in the Mother Road, and the town became home to the first state-sponsored Route 66 Museum in the nation in 1995.

The largest attraction in the city, it draws tens of thousands of visitors to Clinton from all over the world. Complete with nostalgic photographs, vintage cars, and hundreds of Route 66  era artifacts, the museum provides a narrated journey of the Mother Road, decade by decade.

The museum’s most recent addition is a restored Valentine Diner, an absolute “must-see” along the Route 66  journey. Between 1938 and 1972, the Valentine Manufacturing Company of Wichita, Kansas, built thousands of these diners, which could be ordered through a catalog for just $5,000.

Constructed as an eight-to-ten-seat diner, just one or two people could operate these small cafés almost overnight. The diners were made to fit on railroad flat cars and came complete with a grill, counter, and stools.

The restored Valentine Diner at the Route 66  Museum once stood in Shamrock, Texas. Opening in 1956, it was called the Porter House Café until it closed in 1964. The owners picked it up and moved it to their back yard, where it sat for the next thirty-eight years, deteriorating in the weather. However, the old diner still contained its fixtures during its years of service. In 2002, the diner was restored and moved to Clinton in 2003. Though it no longer serves up a tasty array of hot dogs, burgers and fries, visitors can still enjoy a root beer and a moon pie during special events of the museum.

Across the street from the museum, you can see the Tradewinds Best Western Inn, which was once a favorite of Elvis Presley, and further on down the line, look for Jiggs Smoke House, a small cabin cafe that’s been selling barbecue for years. 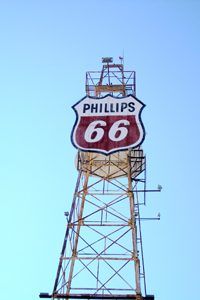 As you begin to head west on old Route 66, keep your eyes open for any clue to the lost Mexican gold mining town of Cascorillo. Allegedly this 1830s mining town was located somewhere between Clinton and Canute. In 1895, tales of the legendary mines set off a gold rush; however, little gold was found, and no trace of the town was ever discovered. Legend or fact? Who knows, but the fun is in the hunting.