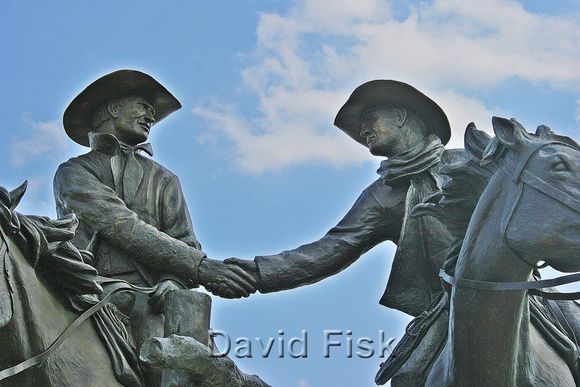 This bronze sculpture by Bradford J. Williams on Route 66 in Elk City, Oklahoma, symbolizes the handshake as a true meaning of a “Binding Contract.” Photo by David Fisk 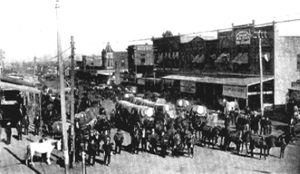 Elk City, Oklahoma, is a town filled with history, from tales of the Old West to Route 66, to the oil boom days of the early 1980s; it provides an abundance of opportunity in sites to see and sets a shining example of western hospitality.

Before this part of Indian Territory was opened up to settlement, thousands of head of cattle were driven over the “Great Western Trail” from Texas on their way to Dodge City, Kansas. However, in 1892, the surplus land of the Cherokee Outlet was opened, and settlers began to filter into the area.

The first pioneer who settled in Elk City was named J.M. “Joe” Allee, who homesteaded a quarter section of land just east of Elk Creek in 1897. In March of 1901, the Choctaw Townsite and Improvement Company purchased land from Allee, anticipating the arrival of the Choctaw and Gulf Railroad later that year. Wasting no time, the townsite company filed a survey of platted lots on March 18, 1901, and planned to sell the lots just two days later. Before the sale even started, hundreds of prospective lot owners had built a tent city. On the day of the sale, the townsite company sold $32,000 worth of property. 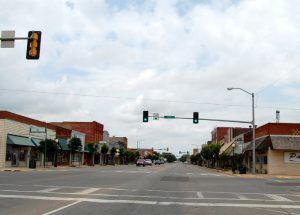 Originally the town was called Crowe. However, some of the business people in the new settlement hoped to entice Adolphus Busch into building a brewery in the new town and tried to change the name to Busch, but they were defeated. In the end, the town’s name was officially changed to Elk City after Elk Creek.

On August 13, 1901, the Choctaw Railroad was completed, and just seven days later, the first train service arrived in town.

By January of the following year, Elk City boasted a population of over 1,000 and more than 60 businesses, including two hotels, several boarding houses, a church, two milling companies, and two cotton gins. 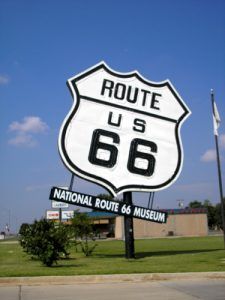 The National Route 66 Museum is in the Old Town Museum Complex in Elk City, Oklahoma.

It was also in 1902 that Elk City began to pave its streets with bricks. Though not even a year old, the town had already become one of the largest in western Oklahoma.

The Railroad and Elk City’s location soon developed the town into a transportation hub, and the city continued to grow.

When Route 66 made her way through town, Elk City responded with all manner of services. In 1931, the U.S. Highway 66 Association held its annual convention in Elk City, with more than 20,000 people attending. The event was held at the Casa Grande Hotel, which advertised itself as the only fireproof hotel between Oklahoma City and Amarillo. Today, this historic hotel is home to the Anadarko Basin Museum of Natural History.

When Route 66 was lost to the interstate, Elk City didn’t suffer like many other cities due to her diversified interests.

A few years later, the great oil field boom of the early 1980s brought thousands into town, working on the oil rigs. One man who worked the rigs described the city during this time as a “wild west boom town” with 20 men for every woman in the community. 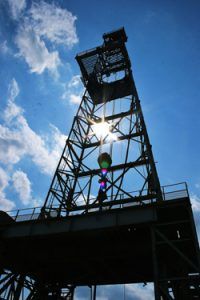 The Parker Drilling Rig #114, located on Route 66, dominates the skyline and testifies to Elk City’s oil boom days. It is one of the world’s tallest oil rigs. Photo by David Fisk

During these boom years, Elk City underwent a flurry of building activity, and many vintage Route 66 sites were lost. However, the Van Buren area was spared as it was viewed as “less desirable” at the time.

Today, Elk City is called home to a little more than 10,000 people and provides a peek at the Route 66 era and that of the Old West at the National Route 66 Museum and Old Town Museum Complex. The museums are located on Route 66 and Pioneer Street. Further on down the Mother Road, you can see the old Queenan Trading Post with its fading name still peeking through on its brick exterior. Though the old trading post is closed, its famous kachinas that once graced the front can now be seen on the lawn of the National Route 66 Museum.

On the Van Buren segment, the north/south leg of Route 66, you can still see what’s left of the Cozy Cabins and the old Red Ball station.

After a great time in Elk City, head down the Mother Road towards Sayre and the ghost town of Hext.