Foyil, Oklahoma, is a small town located on Route 66 in Rogers County, about 10 miles northeast of Claremore.

For most of the 1800s, this area belonged to the Cherokee Nation. However, during the Civil War, some of the Cherokee aligned themselves with the Confederacy, which caused them to forfeit rights and land when the war was over. The Treaty of 1866 forced the Cherokee to cede land and rights to the railroad lines. In 1881-82 the Atlantic and Pacific Railroad, which later became the St. Louis-San Francisco Railway, laid tracks from Vinita to Tulsa, making its way through the Foyil area. 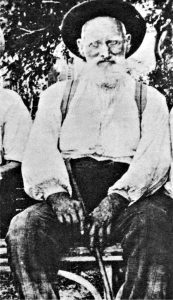 The first settler in what would later become the town of Foyil was Alfred Foyil. After serving as a Confederate soldier and courier during the Civil War, he made his way to Oklahoma in 1875. After marrying the daughter of a leading Cherokee family, he settled on land in Rogers County, where he established a farm and a general store. In 1890, a post office was established, and Alfred Foyil became the first postmaster. The town was named for him.

By 1898 the town had a drugstore and a furniture store, and by 1905 a bank was added. In 1910, the town was incorporated, at which time it boasted about 150 residents. The next year, the town was recorded as having a hotel, a bank, two blacksmiths, a barber, a carpenter, three general stores, two doctors, a drugstore, a lumberyard, a hardware store, a lawyer, a school system with nine teachers, and a newspaper called the Foyil Leader.

By 1920, the town boasted 109 residents, and in 1926 Route 66 came through the community, boosting traffic and visitors. 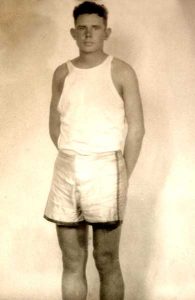 In 1928 Foyil native Andy Payne won a transcontinental foot race called the “Bunion Derby.”  A member of the Cherokee tribe, he was raised in Foyil and loved running. The race was part of a plan by Charles C. Pyle to promote Route 66. The event began in Los Angeles, California, on March 24, 1928, and ended on May 26, 1928, in New York,  a distance of 3,423.5 miles. Only one in four of the original runners made it to the Madison Square Garden’s finish line. In fact, of the 275 who entered the race, half of them had dropped out by the fourth day.

Crossing the finish line 84 days after the race began, Payne’s total running time was 573 hours, 4 minutes, 34 seconds, at an average speed of six miles per hour. After winning the footrace and receiving the $25,000 prize, he used the money to pay off the mortgage on his father’s farm. An Andy Payne statue commemorating the race can be seen in a park between Route 66 and Andy Payne Boulevard. 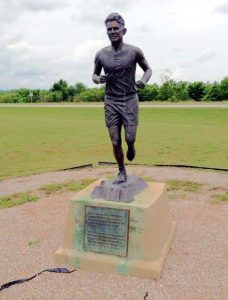 In 1946 the town had two gas stations, two general stores, and a grocery store, but Claremore served as the nearest banking community. That year, Jack D. Rittenhouse, in his Guide Book to Highway 66, described the town: “Pop. 170; gas; small garages; groceries; no cafes or courts. A small hamlet serving the farms and cattle ranches of the region”

In 1962, Route 66 was realigned a short distance to the west, killing some of the businesses on Andy Payne Boulevard. 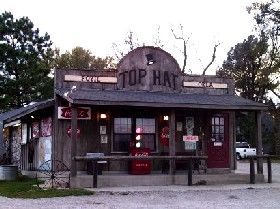 In 1999 the nearby folk art of Nathan Edward Galloway, which includes a 90-foot-tall, concrete totem pole, was listed in the National Register of Historic Places as Totem Pole Park.

While in Foyil, be sure to check out Annie’s Diner at 12015 S. Poplar Street. Built in the 1970s, it long served as the Top Hat Dairy Bar. Also, see the restored Route 66 Texaco Station at 12243 South Andy Payne Blvd. This station began operations in 1926 and continued to service customers until 1963. The station began and ended as a Texaco Filling Station, making it one of the oldest Texaco stations still standing on Route 66. Foyil native Andrew Hartley Payne ran past the Filling Station to win the Great Transcontinental Footrace of 1928. Singer/Actor Gene Autry was well acquainted with it from rooming at a boarding house across the street while working as a relief telegraph operator for the Frisco Railroad. Kean Isaacs is restoring the station. 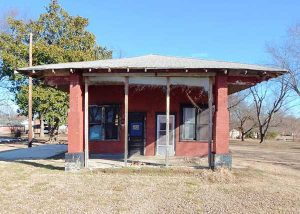 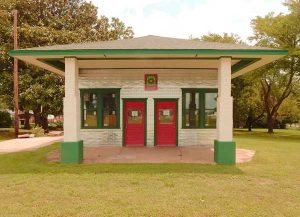 The Texaco Station after much restoration. Photos courtesy Facebook-Route 66 Texaco. 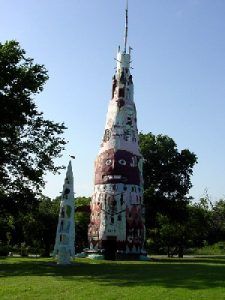 A great side attraction can be seen just four miles east of Foyil on Highway 28A. Ed Galloway’s Totem Pole Park features the world’s largest concrete totem pole. At 90 feet, the totem pole towers over the park in a vivid array of folk art colors. The park also features Galloway’s eleven-sided “Fiddle House” that previously housed hundreds of hand-carved fiddles and today serves as a small museum. Throughout the park are numerous colorful totems that display a variety of Indian Folk Art. This is a definite side trip worth the taking.

Returning to Route 66, you will soon come to Claremore, Oklahoma, best known for being the hometown of Will Rogers.