Bridgeport, Oklahoma, a ghost town in northeastern Caddo County, was once a busy city located on Route 66.

Settlement first began in this area with a stagecoach crossing of the Canadian River and establishing many farms that primarily produced cotton. The town received its name in the 1890s as the place where stagecoaches waited to cross the mile-wide river. They were ferried across during high water, and during low water, the teams forded the river, following their paths carefully because there was always a quicksand problem. 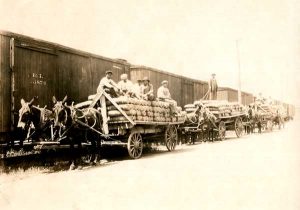 When the Chicago, Rock Island, and Pacific Railway built a bridge here in 1891, a work camp was established on the south side of the Canadian River Valley, which soon grew into a small settlement overlooking its floodplain. In 1893 a toll bridge was built over the river, and a post office was established in February 1895. The post office was held in a store located at the south end of the bridge.

In 1898 the Choctaw, Oklahoma & Gulf Railroad extended its tracks westward and built its bridge near the toll bridge. The Enid and Anadarko Railway north-south lines, built in 1901, used the same bridge.

In 1901, the Caddo and Wichita Indian lands were opened for settlement, and Bridgeport became a booming tent town. In a short time, brick business buildings and good homes replaced the tents, and the town was soon bustling with as many as 3,000 people. At its peak, Bridgeport had 76 places of business, including two banks, a flour mill with an output of 100 barrels per day, several stores, and two hotels. A waterworks was that included a 40,000-gallon elevated tank. 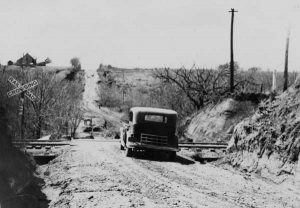 A postal road was built through Bridgeport in the early 1900s that became a primary roadway for early motorists. A railroad branch line was built between Bridgeport and Anadarko in 1901-02, and the town was incorporated after it was completed in 1902. Early businesses included three banks and numerous small businesses, including the Bridgeport News, which began publication in 1905. It would become the longest-running newspaper in the town, continuing until 1927. Served by the crossing rail lines, Bridgeport appeared destined to become an important town as the chief shipping point for a large area.

But for Bridgeport, she would see several issues in her near future, including the unpredictable Canadian River and a town feud. During these peak years, many people found the water on the west side of Bridgeport to be clear and pure, while on the east side, where most of the buildings had been erected, was filled with gypsum crystals. This caused a significant debate among many residents, who felt like the post office should be on the west side, which caused a bitter feud. The depot also stood on the west side. Some businessmen soon decided to move the post office in the middle of the night. The big three-story frame hotel was also moved to a corner location on the west side. This so enraged many merchants on the east side that many of them moved their buildings and goods to the nearby town of Hinton.

In 1907 the railroad bridge was demolished when a freight car jumped the track and struck a span of the bridge. This train, carrying cars of livestock and household goods belonging to German emigrants, fell into the sandy river bed and immediately began sinking into the quicksand. To save the livestock, men opened the car doors and out flew ducks, chickens, and geese.  The engine, coal car, and caboose were all that was saved. To this day, the other cars with everything inside as well as the middle section of the bridge lie buried deep somewhere in the shifting sand of the Canadian River bed. The railroad bridge was replaced the following year.

By 1909, the number of businesses had decreased to 43, and the population had decreased dramatically. In 1910, it was called home to only 428 people. 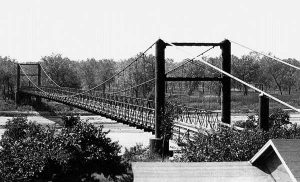 In 1914, the railroad bridge was washed away during a flood, and a new bridge was soon built.

In 1915 a free bridge replaced the toll bridge, but a few years later, it was damaged by a flood. The bridge was eventually replaced by the Key Bridge, which charged tolls.

In 1917, the postal road was absorbed into the Ozark Trails network, but Bridgeport’s population was still falling. By 1920, it was called home to 294 people.

In 1921 the Key Bridge was built over the Canadian River a mile north of Bridgeport by Oklahoma City businessman George Kay. A suspension bridge with a toll, travelers were charged $1.00 for cars and $1.50 for trucks. The bridge spurred future growth for the town. 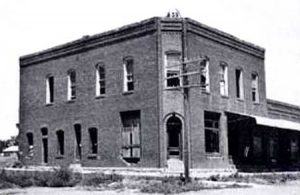 This substantial building that once stood in Bridgeport, Oklahoma, is long gone today. Photo 1940.

When Route 66 was built through the area in 1926, the Key Bridge became the crossing of the Canadian River. However, Route 66 travelers were outraged at the steep charge for crossing the bridge. In 1930, the bridge was bought by the state of Oklahoma and the fee was dropped. That year, the town’s population rebounded to 432 people, at which time it boasted 25 businesses, including a large cotton gin, two grain elevators, two hotels, a bank, and a lumberyard.

Afterward, however, Bridgeport, like so many other towns across the country, suffered during the harsh years of the Great Depression.

In 1933, a new Pony Bridge was built across the Canadian River downriver from Bridgeport. Route 66 was realigned directly from El Reno to Hydro the following year, bypassing Calumet, Geary, and Bridgeport. Immediately, the Bridgeport began to falter, though the Key Bridge survived for another 12 years, meeting the needs of local traffic before a grass fire in 1948 rendered it unusable. The bridge was dismantled in 1952 and sold for scrap.

Before the Pony Bridge was built, Bridgeport was the western terminus of a safe Canadian River crossing. The new alignment was another blow to the small town as many residents moved their families and businesses to the new alignment of Route 66. By 1940, Bridgeport’s population had fallen to 302. 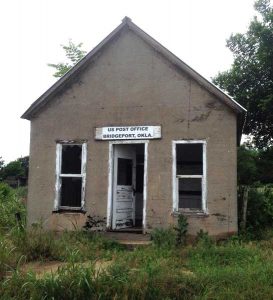 In 1958 the bridge for Interstate 40 was completed, resulting in the highway being moved more than one mile south of town. By 1960, the town’s population was just 139 and continued to drop over the following decades.

Today, Bridgeport still holds a small population, but it consists of mostly abandoned homes. There are no open businesses, but there is still an active First United Methodist Church built in 1907. Unlike most of the buildings in town, the church is in very good condition.

The old post office building still stands on the east side of Market St. between Wichita Ave. and W. Broadway, but no other business buildings remain. The depot has been removed, and spurs of the railroad tracks are covered by sand and grass.

Former U.S. Route 66 is 0.5 miles to the south of the town, and Interstate 40 runs one-half mile further south. The closest access is two miles to the east at Exit 101.

Returning to Route 66, the highway continues west to Hydro, Oklahoma. This section of the old road, surfaced with concrete, is listed on the National Register of Historic Places. 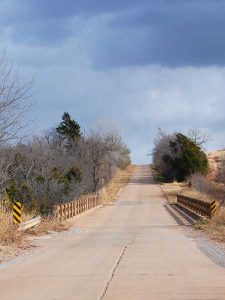