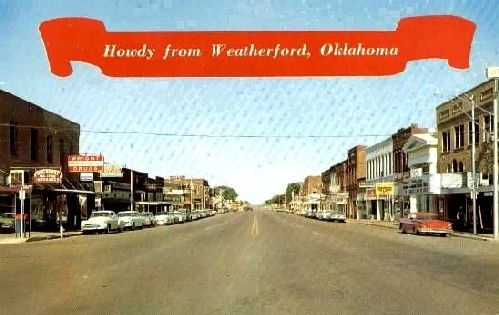 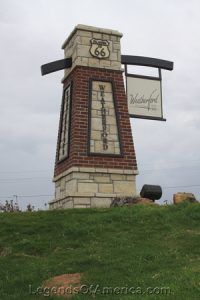 Weatherford, Oklahoma, with almost 10,000 people, offers all the amenities of a larger city while still maintaining its small-town charm. Located on historic Route 66, Weatherford got its start in 1892 when people began arriving at the western border of the Cheyenne and Arapaho country, hoping to take advantage of Oklahoma’s third great land run.

Of these men, William J. Weatherford claimed a quarter section of land that he first called Jordan Flats.  In his group were his wife, four children, his widowed sister-in-law, her daughter, and two hired hands.

This group first made a temporary dugout shelter then began digging a water well. Later lumber was hauled in on horse-drawn wagons to build a five-room house. When supplies began to come by freight wagons from Minco and Reno to the nearby county seat of Arapaho, the Weatherford homestead soon became a trail stop.  A post office was established in the Weatherford home in August 1893, with Mrs. Weatherford serving as its first postmistress.  Their home also served as a school and church for area residents.

As more people settled the area, a blacksmith shop, sawmill, and other businesses were established, and the townfolk called it the Weatherford Settlement. When the Choctaw, Oklahoma, and Gulf Railroad began extending its lines west from El Reno in early 1898, nearby Arapaho was confident they would become the railroad terminus and refused to pay the railroad a bonus. However, this backfired on the town when the railroad located its terminus about two miles from the Weatherford Settlement. In July 1898, the Weatherford townsite was laid out, and lots were sold. Its first businesses, including grocery stores, a hotel, and a restaurant, were housed in tents but were soon replaced with permanent structures.

The first railroad engine arrived in November 1898, and before long, Weatherford became a central trading area for sending and receiving supplies, crops, and livestock. 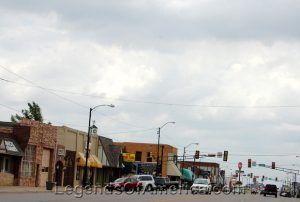 In Weatherford’s early days, the numerous saloons in the flourishing settlement gave it a “wild and wooly” reputation. However, when the railroad continued to extend its line west, the growth of the town dropped, and its reputation settled down.

A school was started in one of the vacant buildings on Main Street until the first school building was erected in early 1904.

By the time Route 66 came through Weatherford, the city was already a well-established farming community.

Today, the city boasts Southwestern Oklahoma State University and the General Thomas P. Stafford Air and Space Museum.  If you’re looking for a bite to eat, try the City Diner, a 1950’s themed restaurant, and on your way out of town, look for the now-closed Twin Drive-In. You’ll also notice plenty of wind turbines surround the town. In fact, nearly 100 wind turbines provide electrical power, and it is the second-largest wind farm in Oklahoma. A small park next to City Hall features one of the turbine’s blades, showing you how big these behemoths are.

Also worth checking out on the end of a winding south frontage road of Interstate 40 is the Heartland of America Heritage Museum. Among the many relics, you’ll find there is a blacksmith shop, a portable town jail from pioneer days, an old one-room schoolhouse, and a former diner on Route 66 that served Elvis Presley several times during his cross-country trips.

Continue your Route 66 adventure on down the road to Clinton – Hub City of Western Oklahoma.